I drove down to White Oak Friday night. I left a little later than I'd planned but on the bright side, I didn't get lost this time. This is despite my TomTom telling me that no route existed to get to my destination. Liz gave me good directions and I wrote them out with a magic marker on notebook paper in really big letters. I knew it was going to be dark by the time I needed to look at the directions so I wanted something that I could see by streetlight.

The Living History weekend started earlier than the Heritage Day, so we got ready earlier. I washed my hair and immediately put it up. The water weight did make a difference but I managed to get it all to fit in the bun cover anyway.


There were more people and vendors at Harmony Hall this year. There was even one fellow who was a stonecarver. 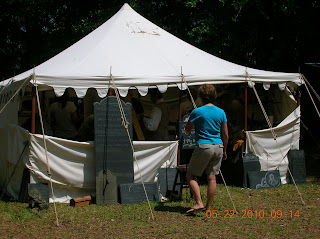 I didn't get as many pictures as I'd planned. I completely missed, again, getting a picture of Liz's mom in her outfit. I barely caught Squirrel and Liz. Once again, no picture of me. I only got “Capt James Robeson” from the back. The gent in question is a descendant of the real Jim Robeson and was presenting a picture from the era, to Harmony Hall. He based his outfit on that same picture. 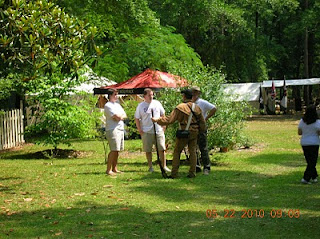 I got a lot of tatting done, but it didn't amount to much. I made a few butterflies and tried to some pieces from Beetons Book of Needlework. Translating from 1870 to modern tatting lingo is not as easy in some ways, and not as hard in others, as you'd expect. For example, on one motif, there's bare thread between flowers but modern tatters are more likely to tat a chain there.

I had planned to come home Saturday but I stayed a little to help Squirrel with the book of embroidery that I gave her. She took her first stitches. By the time that she was finished, I was suddenly exhausted. I left early Sunday morning. 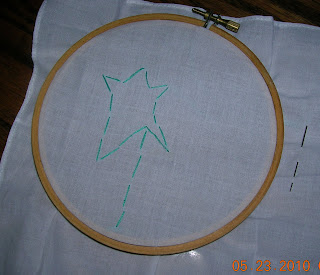 I spotted a wild turkey alongside the road about the time that I got to I95. There wasn't much traffic until then, either. Despite TomTom not being able to find a route to Liz's parents' house, it could find the route home. It started raining when I hit I95 but it didn't get bad until I hit Raleigh. Then someone opened the floodgates. I was doing 50 in a 65 zone, with my hazard lights flashing. The flash ended by the time I got off the highway to go to David's.

I met the others at David's house. Richard was running chapter 5 of the Embers series (Living Forgotten Realms). I played my bladeling druid again. It's the last chapter until the level 11 special at Origins. Or maybe it's at Gencon.

After the game, Richard got out Maya's unicorn and, per a contest, I took a picture of the shirt that I'd won, with the unicorn wearing it. It's a large unicorn. It had a chain shirt, but that's disappeared. 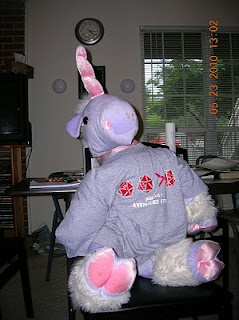 Posted by Sewicked at 4:13 PM No comments:

I tried pilates last night. I am not ready for that; unless there's a beginning pilates. I was fine for the first 15 minutes. After 20-25, I started feeling 'odd.' At 30 minutes, I just lay there and breathed. When the nausea kicked in, it got really unpleasant. I ended up having popcorn and sprite for supper. Not fun. It didn't hurt though, not until today.

At least I have Mutants & Masterminds to look forward to, tonight. I'll grab some Chinese food and head for the GM's house.
Posted by Sewicked at 4:41 PM No comments:

Email ThisBlogThis!Share to TwitterShare to FacebookShare to Pinterest
Labels: Mutants and Masterminds, pilates

Mom loved her present. I printed out the certificate to make a card and added a mother's joke inside. The joke was The Mama Test: She enjoyed the joke and shared it with her sisters (Aunt Dot & Aunt Shirley, Aunt Carole couldn't make it).

Websites that I found interesting:
Oh, Random Pulp Fiction Titles website. These are reallyfunny. Perfect for Spirit of the Century

And an entertaining speech to high school graduates from Jaret Reddick's blog (Bowling for Soup).

A great, fantastic post on one author's writing process

New, less polluting ways, of making bricks are being developed. This one has a lot of potential, if they solve that pesky poisoning the groundwater problem.

Oooh, Oseberg ship. I'd vaguely heard of this. Now I want to learn more.

Gaming:
Pathfinder Society is retiring some year 0 adventures on the 24th. This past weekend, we got together and played three of them. Three of us ate (ran without playing it first) a module. We had a pretty good time. The only drawback that I had is that all of us had previously played, with those characters, together. We didn't do character introductions, which I have learned makes it a little harder for me to 'get into character.'

On the bright side, my druid is 7th level now & her tiger Blake has reached his full growth. Now I need for her to find/buy a collar of animal reduction. It's a lot easier to travel with a medium tiger than a large one.

Tatting:
Next weekend I'll be near Fayetteville on Saturday for Harmony Hall's Living History Weekend. I won't be there all weekend because frankly, it's too tiring. I drive down Friday night, after work. I'm there, tatting, on Saturday. I drive home Saturday night. It's usually hot and I'm in c. 1812 dress.

I've almost finished my bracelet. I only need to (locate and) add the findings. 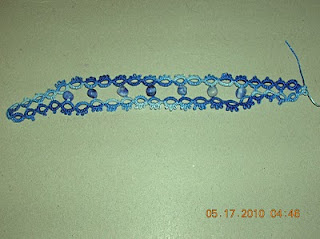 Posted by Sewicked at 4:55 PM No comments:

I've been torn about what to get my mother. On the one hand she doesn't need any more stuff, but I want to get her something. I suddenly remembered what I got her last year. This year, I bought her something similar; a clean childbirth kit for Burmese Midwives. I thought about getting a chicken or something from Heifers International but decided this was more 'motherly.' 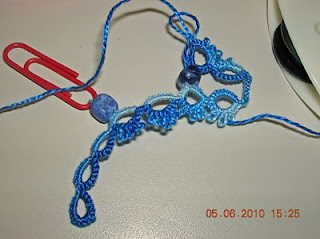 Tatting: Using Jane Eborall's beaded picot instructions, I did a test of a bracelet design. I started with the plain rings on the left with simple split rings. At the 4th ring I added a bead on the picot, holding the picot 'open' with a paper clip. On the 6th picot, I did another one, but couldn't find another paperclip. I managed to use the same one.

I was too impatient to delay until I got more paperclips, so I doubled back and did the 'other' side of the bracelet. I made certain that the join worked and declared the test successful.

I've started the real bracelet now. I put a picot on the first ring; so I'll have a place to put the jump ring and fastener. I've also started single picot rings before I get to the point that I'll add beads. The bracelet will be assisted by the fact that I bought a pack of paperclips to hold the picots.

My scrunchy is on hold. I'll pick it up when I need some more brain dead tatting.
Posted by Sewicked at 6:07 PM No comments:

Platelets! I have donated!

Here's a tragic story. I hope it ends on a better note than it currently enjoys. When people take every legal step that they can and then have their wishes ignored...it's enough to make me chew nails and spit out tacks.

Want to knit your own Doctor Who scarf? This woman is a geek after my own heart.

I finally managed to donate platelets. Now I know, give up on donating in the morning. I need to have more food in my system, ie I need to do it after lunch.
Posted by Sewicked at 5:41 PM 2 comments: