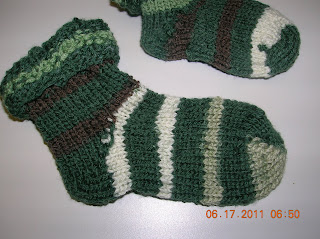 The Siege in Chattanooga, Knitting a Sock & other stuff

I went to the Maryland Sheep and Wool Festival. Carrie and I drove up. She drove, I kept her company.

I was looking for a fine-gauge knitting loom (the knifty knitters are too big for regular socks). MSWF is huge, so I should be able to find one, right. Heh, heh. Carrie could only think of 3 vendors who'd have that sort of thing (instead of raw wool, spun wool, dyed wool, sheepskin, yarn, dyes, jewelry, spindles, spinning wheels, knitting needles, crochet hooks, shawl pins, stools, sheep shearing supplies, rugs, shawls, art, etc). We went to the first one. They looked at me like they wondered what kind of rocket I'd used to come to this planet.

The next vendor at least knew what I was talking about, but they didn't have any. The third vendor wasn't there this year. So no knitting looms. One dealer had lap weaving looms, but that's not what I wanted.

We had fun. We ate lamb and met up with some folks from Ravelry. That evening we went to a nice, local restaurant in the shopping center across from our hotel. They had four types of chili and gave you samples before you ordered so you could select intelligently. Coincidentally, there was also a large Jo-Ann's in that shopping center and I wanted to see if they had any Llizbeth thread. The one near me is too small to carry any.

Tatting supplies are ~somewhere~ near the knitting/embroidery supplies so I usually wander around that area until I find them. This time guess what else I found? Yep, I found not 1, not 2 but 3 fine gauge knitting looms; one of them was even labelled 'sock loom.' I bought that and some Lizbeth thread.

The next day, with some help from Carrie, I selected a couple skeins of sock yarn and got started on a test swatch, aka baby sock, on the way back home.

The Siege in Chattanooga is strictly a gaming convention. I played Pathfinder all weekend this time. We were in a warehouse-type building. They were working on it to make it more meeting hall-ish while we were there. And things would have been fine except some {expletive deleted} stuffed paper towels in the men's toilet.

That jammed all the toilets. No bathrooms in the building for a few hours, for anyone. If you have to go, go back to your hotel room. And, while the roto-rooter guy was unplugging things, the air had to be turned off. No air. In a metal-roofed building. In the summer. In the South. Ugh. Triple ugh. The temperature never recovered. At least on Sunday, if you sat directly under a fan/air unit, it was bearable.

I reviewed a book:

Dragon Bound by Thea HarrisonMy rating: 5 of 5 stars
I picked up this book because I needed a book to read on a long drive. I ended up not taking it and I'm a little sorry I didn't. I would have had a great uninterrupted read, instead of having to put it down for unimportant things like eating, sleeping and work.

I wasn't certain how I'd feel about the relationship beginning (she stole from him, he hunted her down - this is not a spoiler, it's in the back cover blur), but Thea made it interesting and believable. There were some good twists and turns in the plot but nothing felt like deus ex machina.

Pia, the heroine, has a wonderful sarcastic streak, even when it's not in her best interests. And she realizes this, just like any of us might. Her relationship with Dragos gets a little complicated, but in a good way. And they *gasp* do sometimes talk and think about their relationship; instead of going off on wild tangents due to misunderstandings.

This book has me interested enough to look up the next Book of the Elder Races and other books by Thea Harrison.

View all my reviews
Posted by Sewicked at 4:06 PM No comments:

Ah, it's a common problem. You underestimate how much thread you need, and then you try to keep tatting, after a sensible person would add another thread. Until you completely run out of thread and do not even have enough to tie a knot or hide an end.
Posted by Sewicked at 3:52 PM No comments: