Work isn't opening until 10 am today, due to dangerously icy roads. It started snowing at 6 am yesterday morning, so roads were slick. Some people worked from home as a result. By the time I headed home in the afternoon, roads were wet and slushy. I headed home early because I knew, once the temperatures dropped, I did not want to be out. 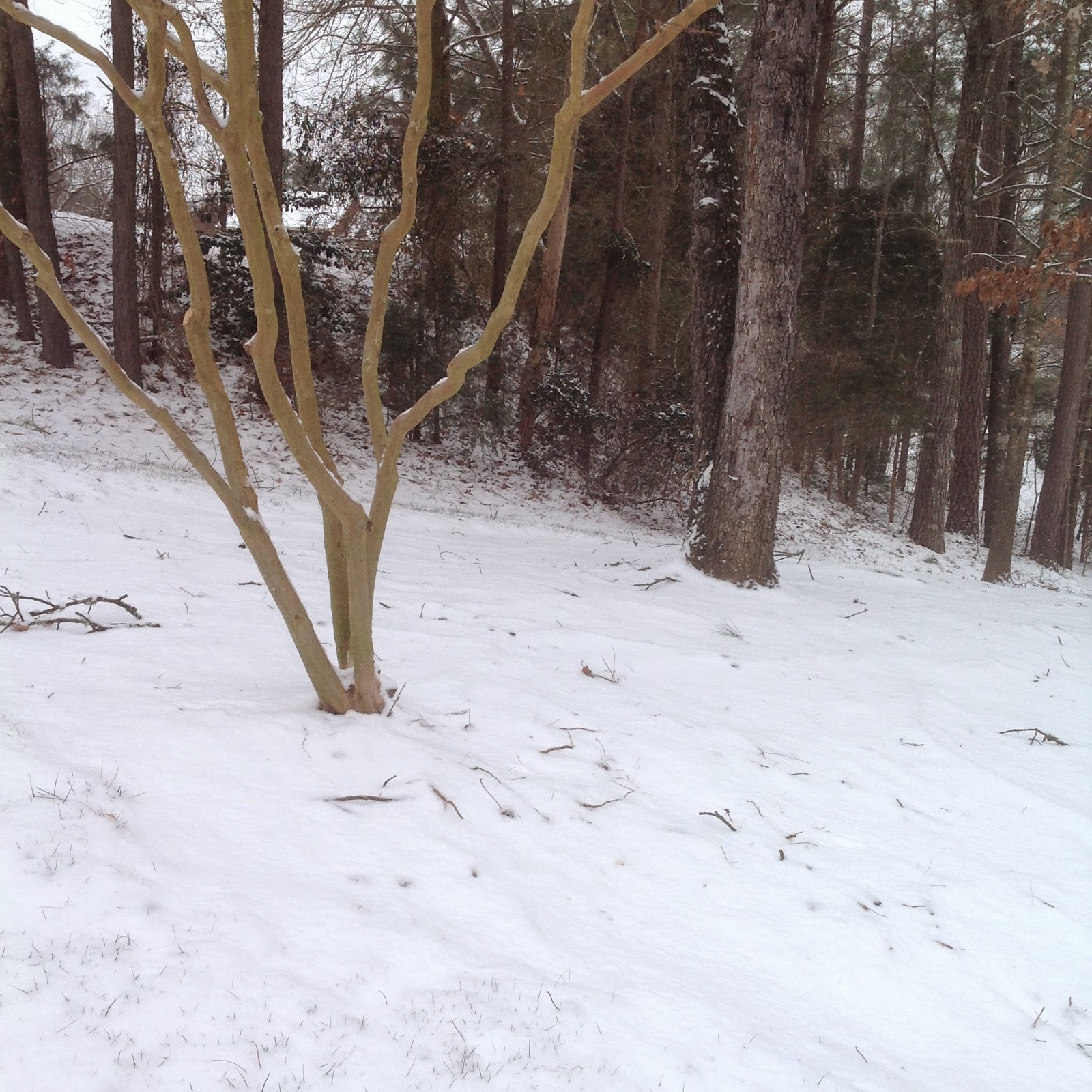 I'm working on the baby booties but I have to open a ring. Here's a picture (before things went wrong). 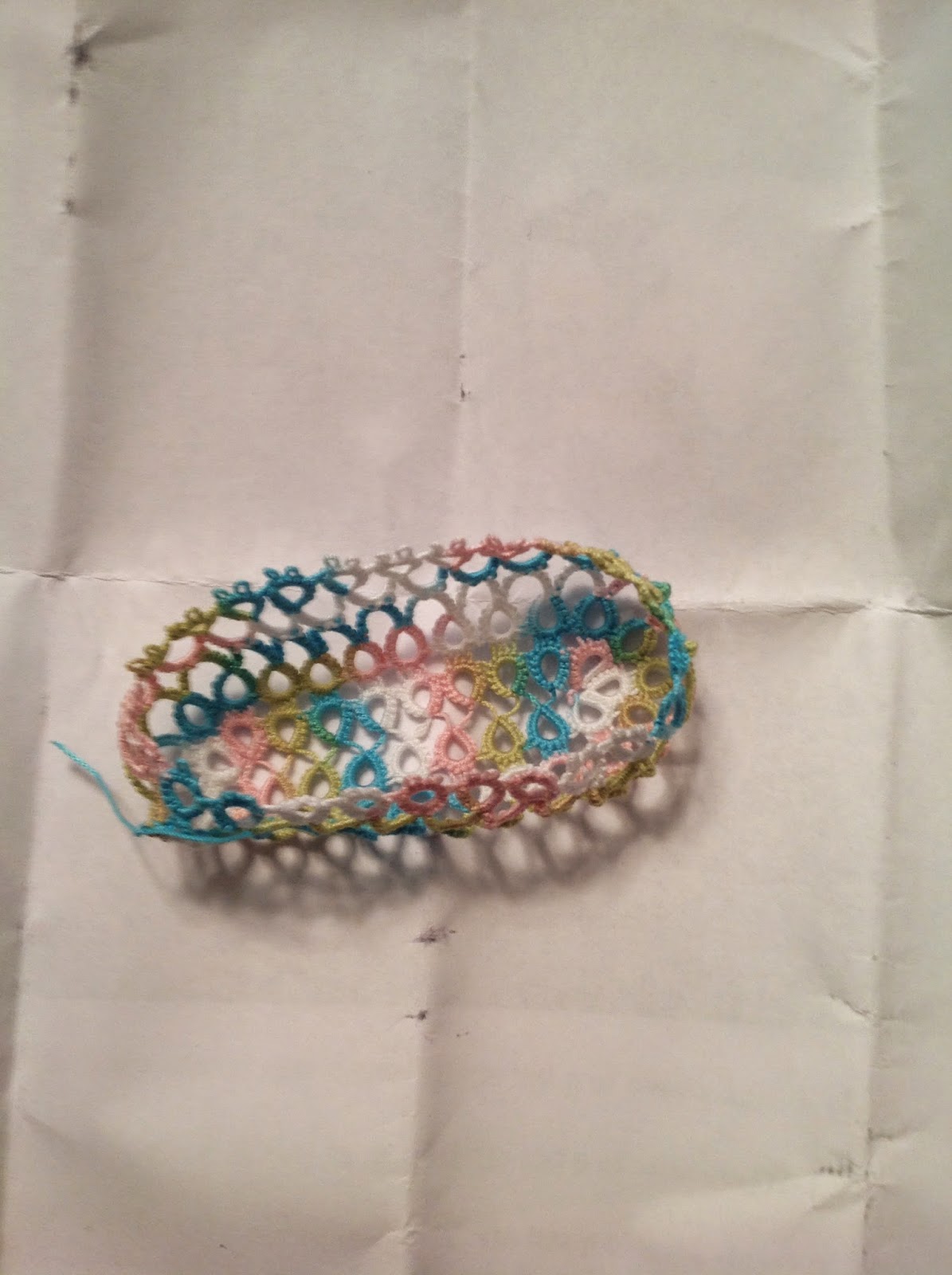 Last Friday was very cold, so this was the outer wear I wore. From left to right, my really long scarf, hat and earband, fleece mittens, gloves, and then my really warm coat. 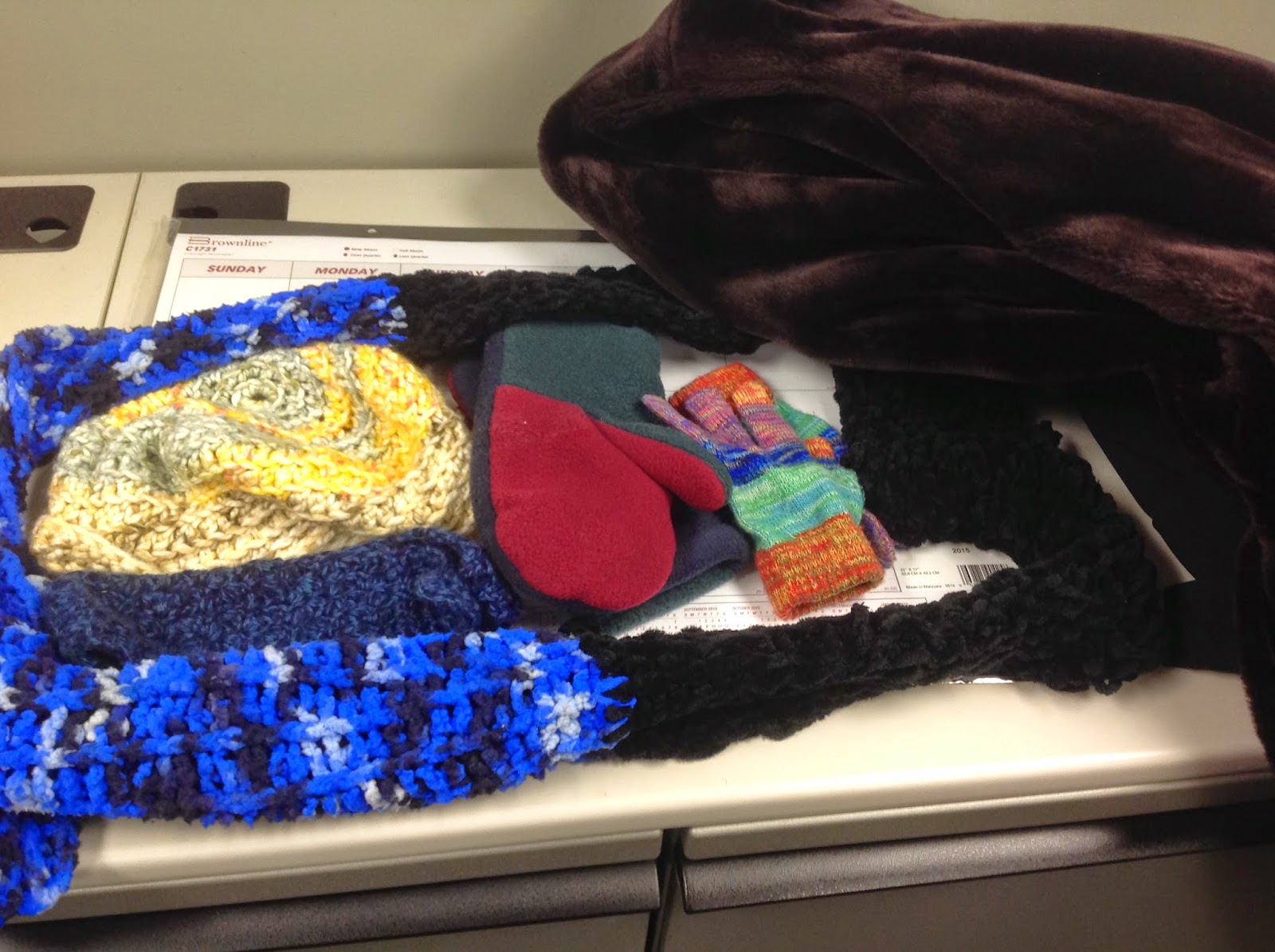 I had three things in the mailbox on Monday. I got a letter back...ripped in half. I need to print out what I wrote and send it out again. A friend in New York sent me some of her basil oversupply. I also got Night Time drops from Smith Brothers.

I went looking last week and no one could find it to order it for me. I checked the Smith Brothers website and finally contacted customer service. She broke the news to me they had changed the formula, no more melatonin. I expressed my disappointment and she offered to look for any leftover samples. Guess what arrived! She found four packages from a display in the warehouse and sent them to me. Great customer service from Smith Brothers.

Dad got a letter from his sister, she had a box from one of Grandmother's sister. Inside were some letters from Grandma, one of which concerned a visit to us and mentioned me as a little girl. I think he plans to send me a copies.

Due to weather, our GM has cancelled our game tomorrow. Plans are still on for R's birthday supper. We tried to meet last week, but the weather and roads were too bad. We had our game on Sunday and it went pretty well. We got started late but had fun.

From C (after watching a crime procedural): 'It's blunt force trauma, maybe, I'm your CI, so call me, baby.'

Posted by Sewicked at 8:25 AM No comments:

We finally got some wintery weather that amounted to something. In inches, it didn't add up to much, but any ice is bad.

This is after about an hour of snowing. Just after I took this picture it turned to sleet. 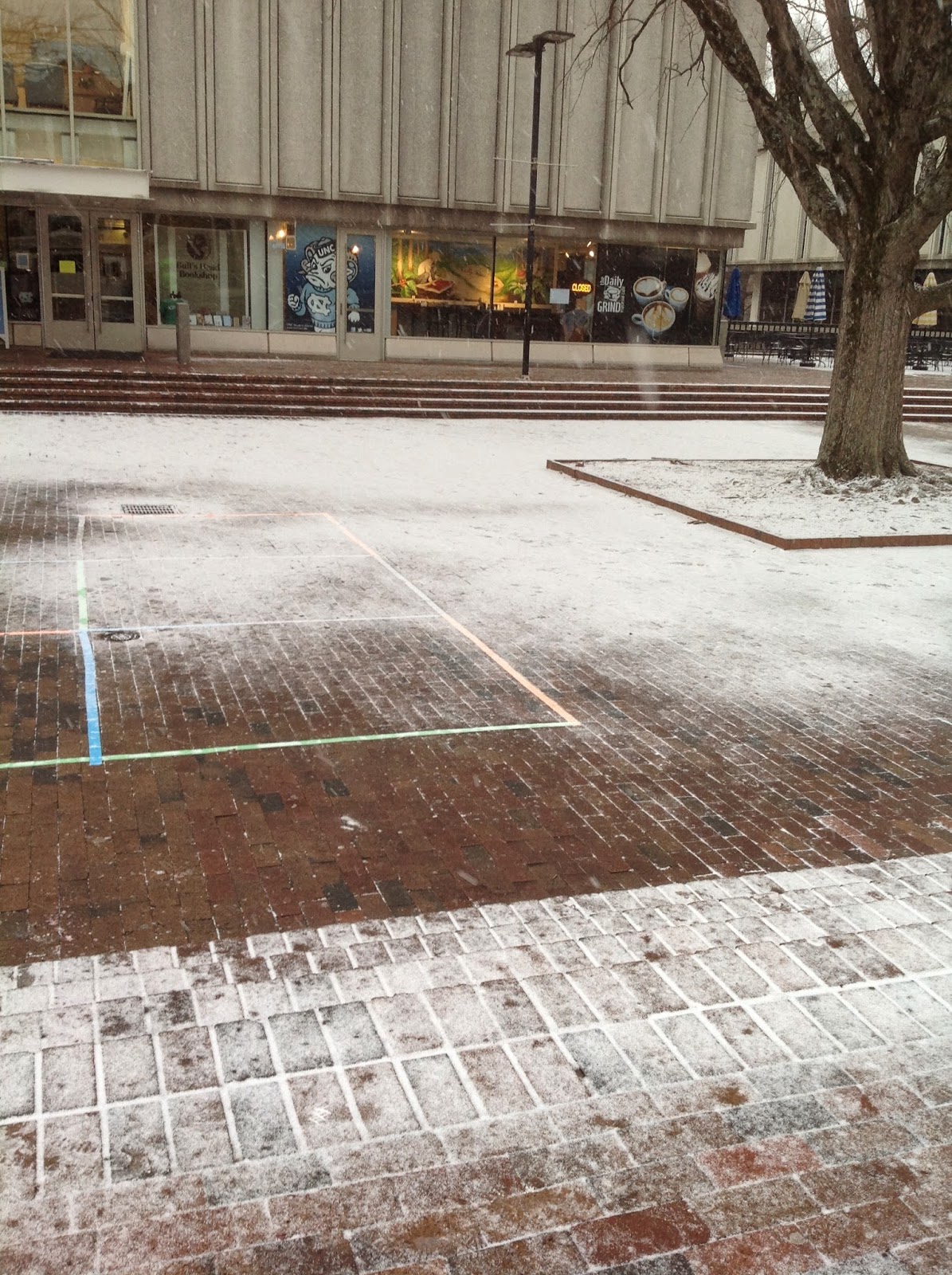 This is about 6 pm, and I had only seen two cars since I disembarked the bus. Do I need to say that's unusual? 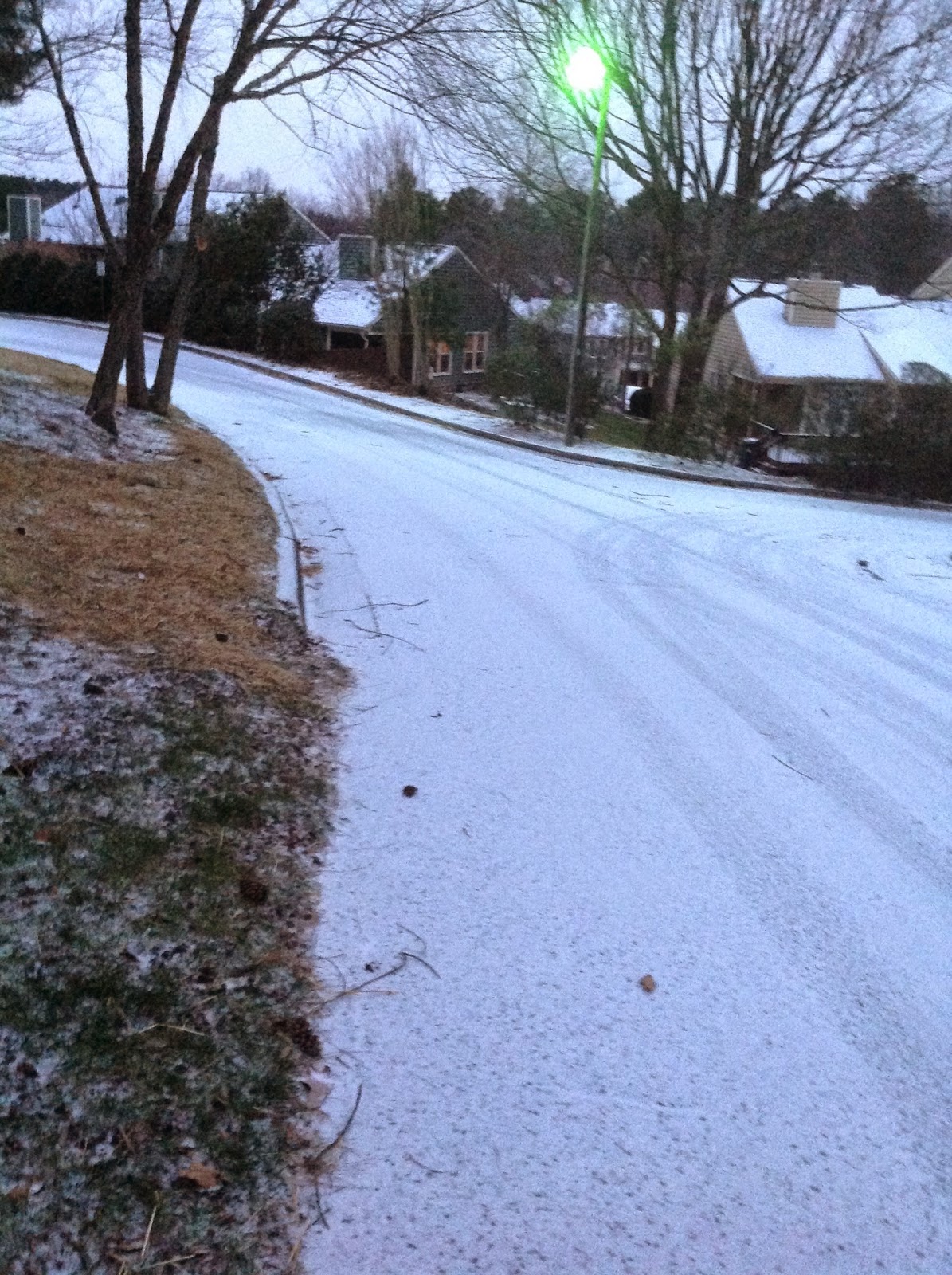 My bus left as I was heading for it. I couldn't run because of the treacherous footing. I had to wait over a half hour for the next one. I stayed mostly warm, because I dressed for the weather.

As of 2 pm, work was at 'you can leave if you aren't mandatory, just take paid leave', until 11 am on Tuesday, when I looked at 7 am. However, my bus didn't start running until 11 am, a mile away. My stop wasn't going to get service until 3 pm. At that point, I decided it wasn't worth it. I let my supervisor know, he wasn't surprised.

When I happened to look again this afternoon, work and bus were both closed, the announcement made about an hour after I last checked. I'm glad I didn't even try. Apparently, the ice was even worse than I thought.

I found the thread for the booties. Too bad I can't find the same pattern. I found another pattern, though. I'll probably go with that. The thread is Lizbeth #109. I thought I would get more done since I was home all day, but all I did was get the shuttles loaded.

I'm glad I dropped my lettermo letters in the mail over the weekend. They didn't go out yesterday because of the Federal holiday but they'll go out as soon as mail services can resume. Here's one I mailed. 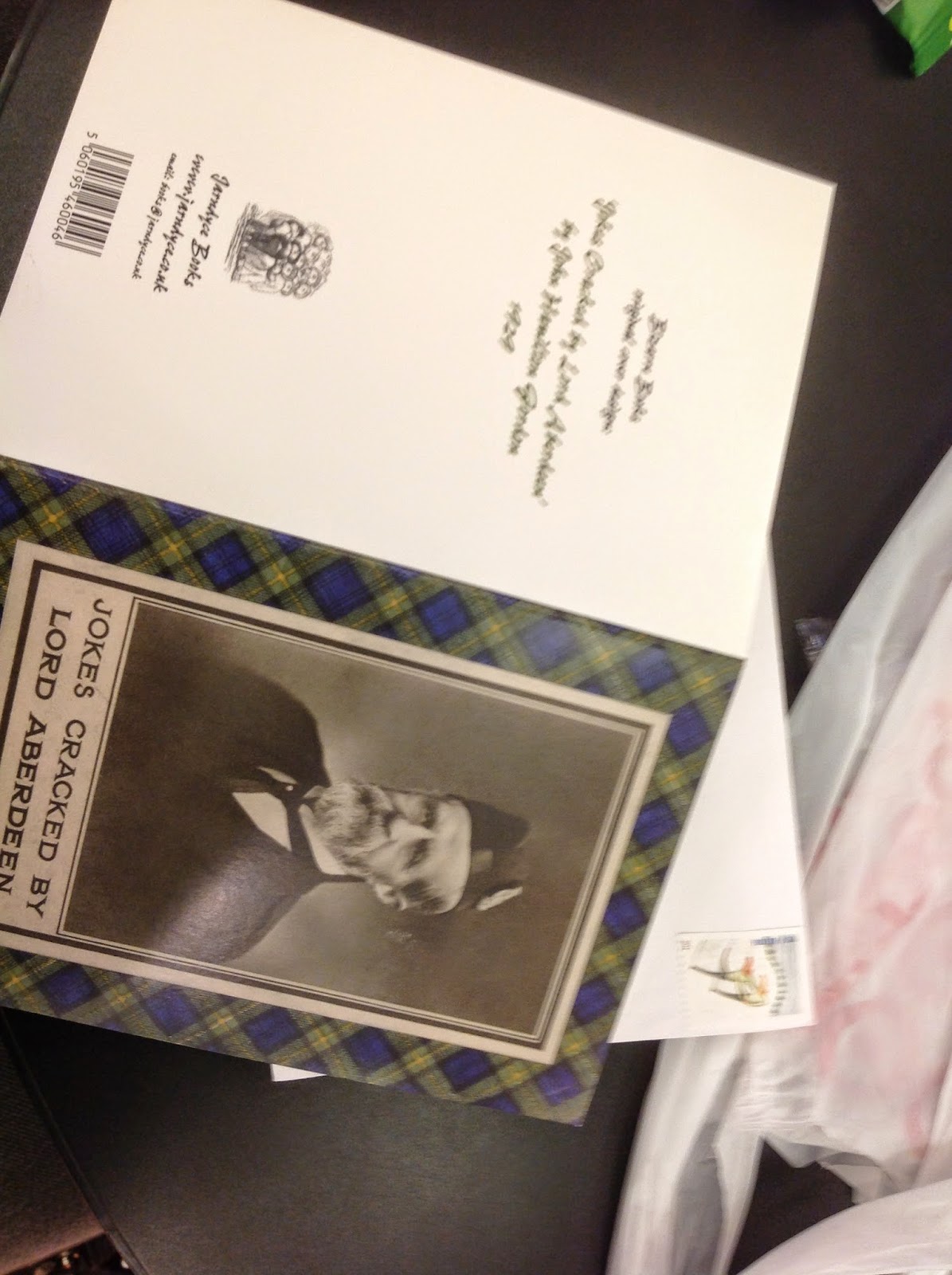 I never did post my final scissors, did I? Here's my final of Jane's TIAS. 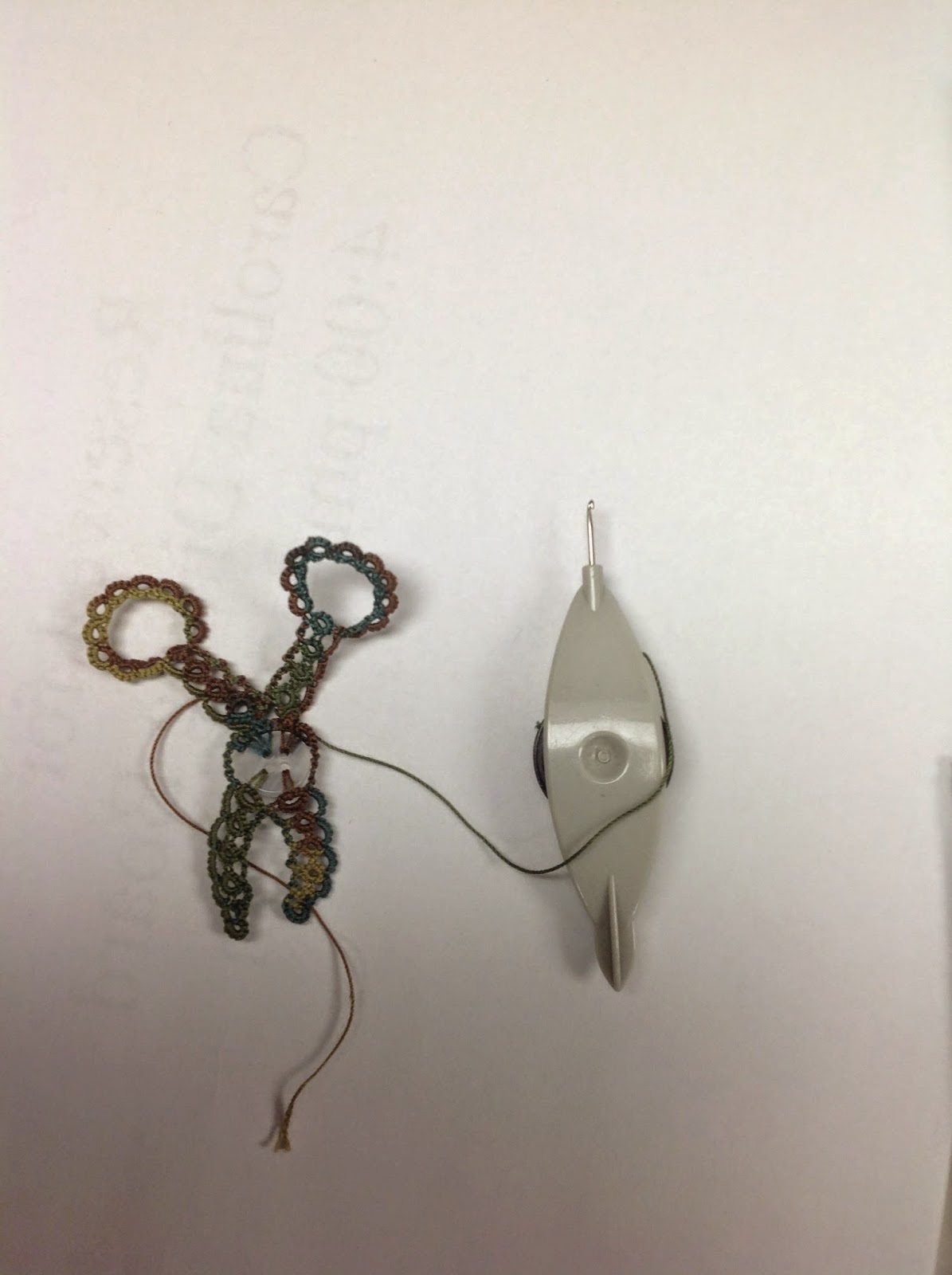 As you can tell, I ran of thread on one shuttle. I had enough to finish, and that is what is important. I used what was left on the other to make a Barbara H heart.

By the way, the Japanese heart I've been doing, is about the size of a US quarter in size 20 Lizbeth.

Saturday, we played Mermaid Adventures again. The narrator says he needs to work on his plots, as we've had some kind of chase scene every adventure. His daughter's character is made for combat, with high body, tough, lucky, and fast swimmer.

For Valentine's Day present, I gave my SO a grater to replace one we had accidentally ruined, the measuring cover part anyway. Then we found out he can get a replacement cover for $.25. Oh well. It's the thought that counts?

Lettermo is well underway. I've already gotten three letters and sent out about 10. And those are just letters to family and replies. I have a list of new people to write, too.

My ankle high boots, developed a hole in the insole, right under my heel. That's incredibly uncomfortable, so I bought gel insoles. They are quite comfortable and I think they make me about a quarter inch taller. At my height, with the low heel on the boot, that's important. 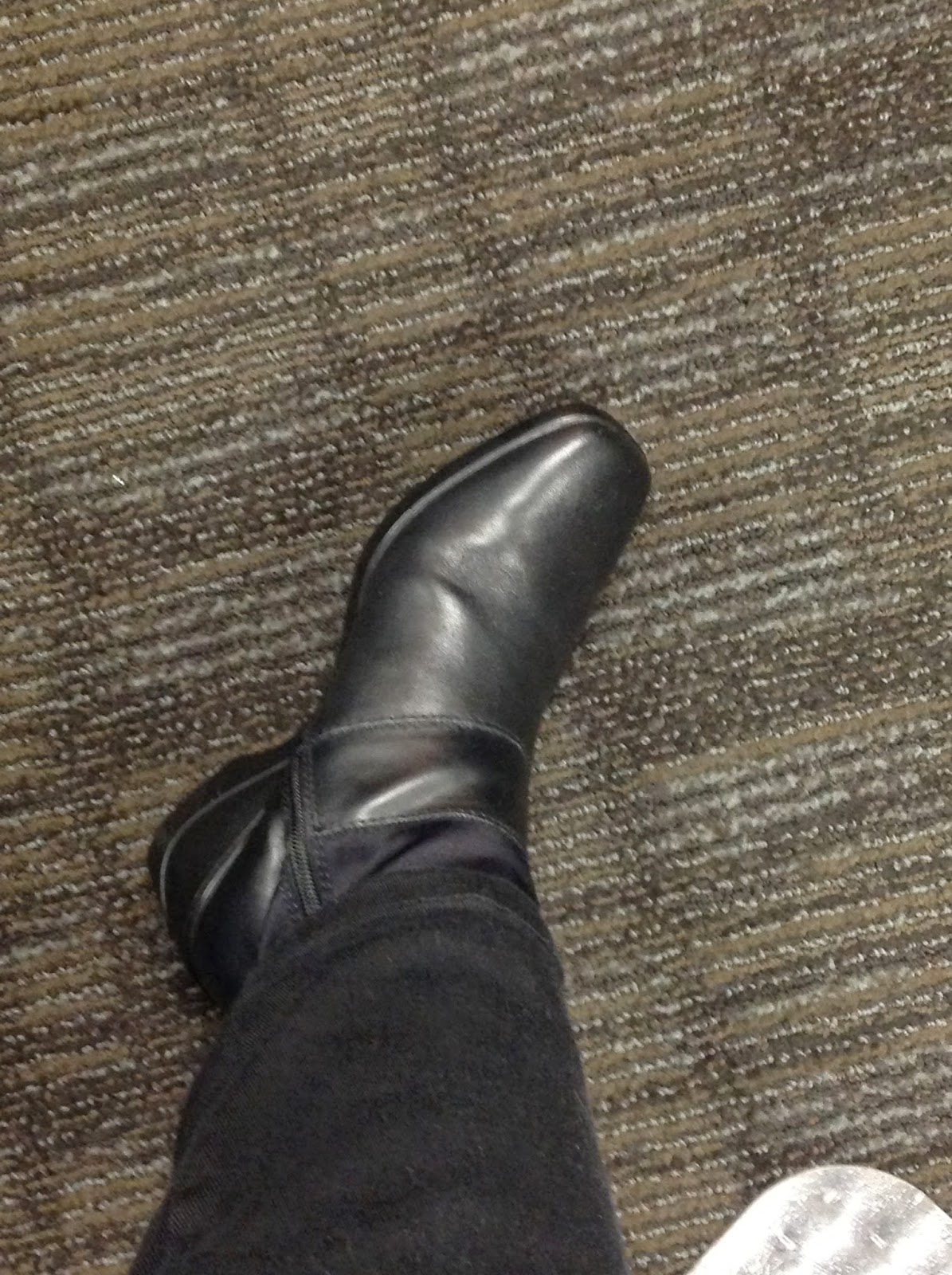 I've been watching Agent Carter tv show and enjoying it immensely. (link is to a great blog post about reasons to love the show)

We're behind on Sleepy Hollow but we're catching up. I do enjoy the historical namedropping; it's just so entertaining.

I've made a couple heart bookmarks, using that earlier heart pattern. I used the cord idea from Kersti, of using a lockchain. Then I ended it with a simple clover, with or without a tassel.

I've been having problem finding stationery. I finally bought a pad of decent quality paper and some washi tape. Voila, instant stationery, as many pages as I need. Right now, I'm using old calendar pages with white address stickers for envelopes.
Posted by Sewicked at 9:20 PM 2 comments:

I found my bracelet. It looks good, even if I do say so myself. And a couple days later I found my TIAS. I got caught up and sent the pictures to Jane.

I tatted a heart (from a Japanese webpage) while my project was lost.


I messed up my weekend schedule. I told mom I'd go see her this weekend, and told M.C. et al that I'd play Pathfinder on Saturday. I talked to my boss and he let me have Monday off; letting me see Mom for two days and not disappoint people.

We made some decent progress in the game and Chris made honey barbecued chicken for the first time. He found is surprisingly simple.  After the game, we shared food and conversation.
Posted by Sewicked at 8:55 PM No comments: