It's not really a happy holiday, but it is a good time to recognize the sacrifice of men and women in uniform and their families. I hope you took at least a few minutes to remember them.

No Deadlands game this week, the GM had tickets to a showing of Wait, Wait, Don't Tell Me and for some reason he felt that was more important. Poozer. (joking of course)

Saturday was a meeting of our local tatters. I showed Rosemary (one day I should learn her last name) how to tat with beads. She's working her way through Kay Judt's book of stars. I also brought a box of thread to share (thanks, Stephanie). There were balls of size 10 and size 80. 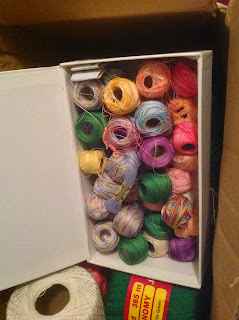 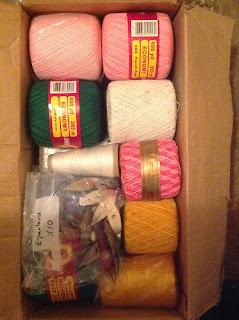 On Sunday, C had a pie class. He brought home sample of his strawberry-rhubarb pie and it was delicious. I hope he makes it again. After that, we dropped off a bag to Goodwill, some books to sell at a UBS, and finished emptying my Saturn. I had forgotten to empty the glove compartment. No one keeps gloves there anymore, did you notice?

One of the errand we ran was to try and get my purse fixed. It's a teardrop purse, cross body sling, of leather and nylon. It's an excellent bag but the back of the strap is nylon and wearing to pieces. The guy took one look and said, 'nope, can't do anything with this.' I think he could have, if he had asked what I wanted him to do. I didn't expect him to replace that lining, I wanted him to sew leather over it. Ah well. I have sewn fabric over it and hopefully that will work. (pictures to be added later)

Monday, C and I went by Jo-Anne's so he could buy my birthday present. He bought me a new pair of embroidery scissors. They didn't have exactly what I wanted and if I hadn't gone with him, he would have had no idea what to get for me.

For supper, we met some friends at Casa San Carlo. I had wanted sushi but the sushi place was closed. It's not exactly a hardship to go to Casa San Carlo instead. I had the blue crab ravioli again. And for appetizers we had escargot and the fried mozzarella. By getting leftovers, I had enough room for a slice of the orange patron cake. So. Very. Good. RG had my birthday presents; a copy of How to Get Dressed, Mer World Problems (coloring book), and a corner paper punch. She did very well, didn't she. The funny thing is, they arrived at her house while I was visiting her. She had paid for all 3 to be gift wrapped but only two of them were. I had to plug my ears and hum while she called customer service to get a refund. They handled it quickly and well, at least. But they taped the wrapping to the book. SACRILEGE!

DR gave me a gift certificate to B and N. Hmm, books, how did he know?

Today, my co-workers took me out for lunch and my supervisor brought in chocolate cake. I brought half of it home.

It's gotten hot. It's still cool enough at lunch, most days, to enjoy sitting outside in the shade if there is any kind of breeze. I've almost caught up on my responses to letters. I still have more to write.

Our Mermaid Adventures game got cancelled. M had a birthday party sleepover to attend. C. R, and I played Lord of the Rings Online instead.

I've been doing a little tatting. The hearts are for tsocky, she has cancer. If you don't know who she is, she's a marvelous knitting designer, known for her incredible socks. She's a genuinely good person. 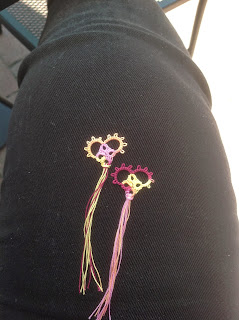 The bracelets are just a couple I finished this week. They're currently blocked and drying. 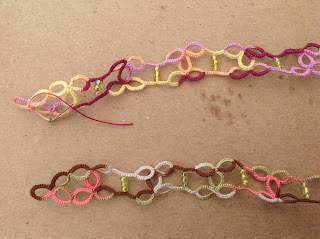 Have you heard or seen the YouTube series Sh%t Southern Women Say? I listen to it, going 'never heard that, I've said that, mom's said that,' etc.
Posted by Sewicked at 9:57 PM No comments:

C, RG, RW, MC, and I are playing a Pathfinder module. C is running. I'm playing an elf bard (diplomat), RW is playing a dwarf fighter, MC is plying an elf technomancer (wizard with some tech added, like electricity, etc), and RG is playing a human oracle/paladin. RW is doing an excellent job of role playing his dwarf's low charisma.

RW has started playing Lord of the Rings online, with me, RG, and C. We try to play together once a week. RW has a kid so, of course, childcare gets priority.

I am unloading my Saturn. I had let things accumulate, so I am taking this opportunity to get rid of some stuff and decide, 'do I really need/want this?'

Tropical Storm Anna hasn't done much here, just rain, rain, break in the rain, and rain. She's our first named storm of the season and she's really early. Is that an indication of how bad this storm season is going to be?

I'm still packing my lunch every day. Car payments have really cut into my spending cash.
Posted by Sewicked at 10:30 PM No comments:

Looking for a new (used) car is not really my idea of entertainment. I know something about cars, but I don't remember when put on the spot. I've been looking on-line but you can't get a feel for the cars. Plus, I want a standard transmission and that's getting harder and harder to find; unless you're buying a new car and make it part of your build.

However, my 22-year-old Saturn broke the timing chain. It can be repaired but at this point, it's cheaper to buy a new car. I spent about a week shopping around on-line. It gave me an idea of prices, at least. But I all the sites I looked at wanted me to narrow to manufacturer and make first thing. My wants are quite basic: electric or hybrid (which are still too expensive for me or the ones I can afford won't do what I need them to do), sedan/small car, four-doors, cruise control, anti-lock brakes, and a good maintenance record. I finally just landed on one that had a good maintenance record and looked at those.

On Saturday, C and I went to Crown Honda to see what they had. The salesman was good, he took us to one that was in my price range and below my mileage limit. I test drove it. Cars have changed in the 17 years between the manufacture of my Saturn and the 2010 Honda Civic I drove. The one I dislike, but accept, is the larger bar between side window and windshield. Apparently, that's where an airbag is stored so it's not going away. I'll just have to duck and bob when looking that way. It's smaller than my Saturn, both in body length and in trunk.

Having the speedometer right below the field of view through the windshield is great. Daytime running lights are a good thing, although no substitute for using headlights in poor visibility conditions, like fog or rain. As a new(er) car, the gas and brakes are more sensitive than on my Saturn.

Here's my new car. I had my Saturn for 20 years. It's going to take time for me to adjust to the new car. And hello, car payments. 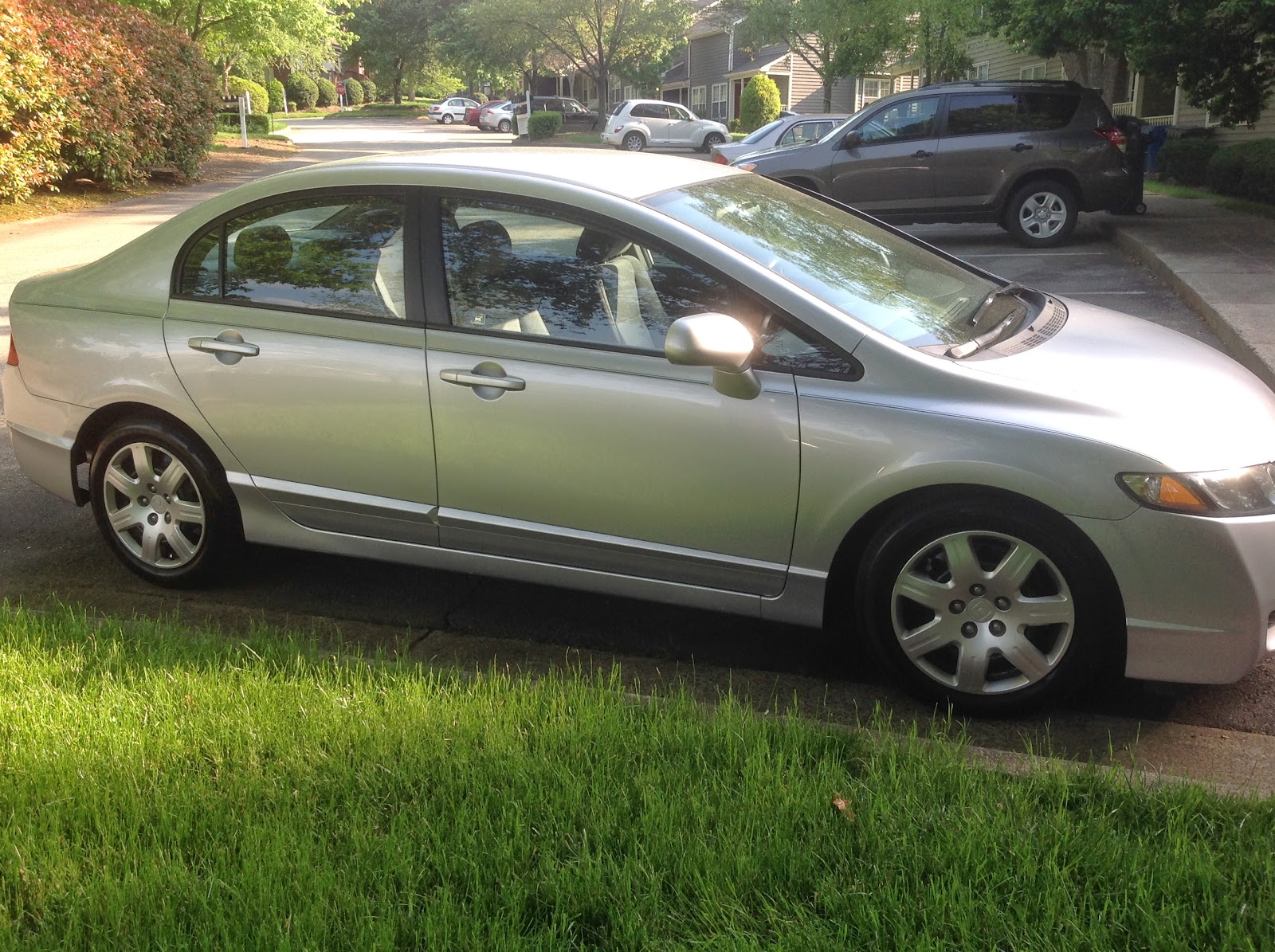 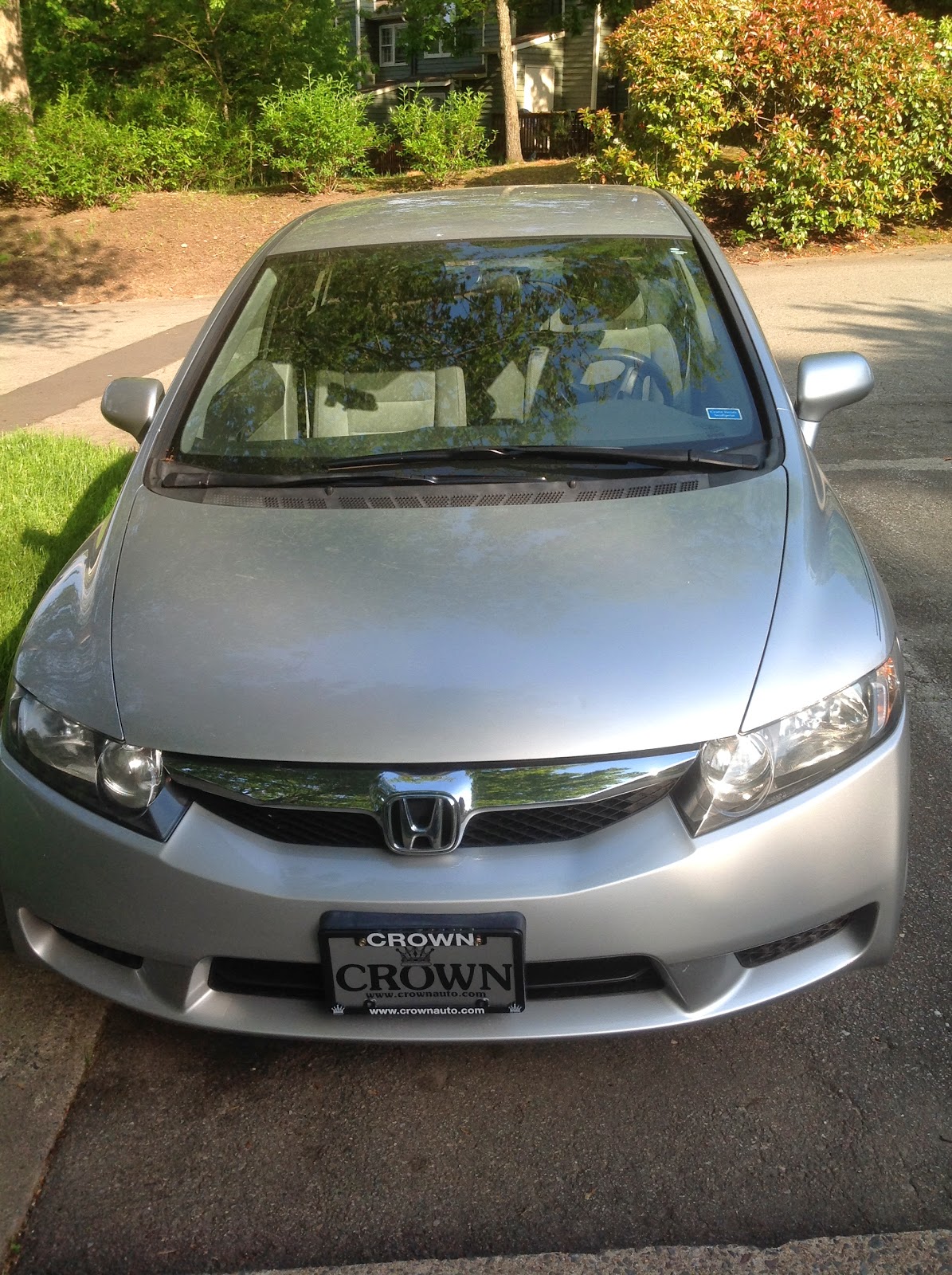 I have 32 inches of my edging made. Soon, I'll have to start comparing it to the scarf to make sure it's the right length. I'll have to make a decision then, sew on one end or leave it until both ends are ready.

I took part in the spring walk/run at work on Friday. It's 1.5 mile walk or 3 mile run. There was a group of 4 people behind me. Everyone else was in front of me. At certain points in the walk, I could have been completely alone. I'm glad I took my iPod. And while it was raining a bit, it never poured. I don't have any pictures from the walk because my iPad would have been awkward.

Despite the fact I missed seeing Ironman 3, I went with friends (C, R, & JJ) to see Avengers: Age of Ultron on Sunday. We went to an Irish pub for supper. We had quite good service, even with the less than obvious stuff, like turning down the music when we asked. I quite enjoyed the movie, even with some problematic stuff, which is open to interpretation by the viewer.

New desk phones at work. Something else to get used to. These are computerized, to the point there's a way to restart them.

And I hop everyone had a good May Day.

Posted by Sewicked at 7:19 PM No comments: