Last year, a local group (Knight of the Fiat Lux) held a Fantasy Conclave, of gaming and goodness to raise money for the Autism Society. They asked C, R, and myself if we'd be willing to run Pathfinder. We said yes. We ran first level Pathfinder Society adventures, We Be Goblins, and rounds of the Beginner Box Bash. People had fun and they raised money.

So they invited us back this year. We ran We Be Goblins, We Be Goblins, Too; (please Pathfinder, make the sequel called We Be Goblins, Many), Beginner Box again, plus some other low level adventures. We had 3-5 tables at every round and 4-6 players every Beginner Box round. And they raised over $4000. Isn't that cool. We also made it to the auction this year and I picked up Knightmare Chess 2. They run a great con; with pre-ordered, delivered lunches on Saturday.

I've signed up for Palmetto Tat Days, registered for classes and paid. Unfortunately, the tin with my walnut Silent Tatter, Aero shuttle, and partially completed bracelet has gone missing. I had it at work last week but it's not in my bag now. I'm terrified that I've lost it for good.

Contemporal was loads of fun. Chris bought me this fabulous fan, and the same vendor has fan holsters. I bought one and it's great. It holds all but the smallest sandalwood fans and up to the size Chris bought for me (the size of my torso when open). I ended up running two games of Fate Accelerated and a quick Ironclaw adventure. I had left my notes in the car, and didn't realize it until Chris went to get food in it. So we did character generation and I ran them through Squirrel Hunt. 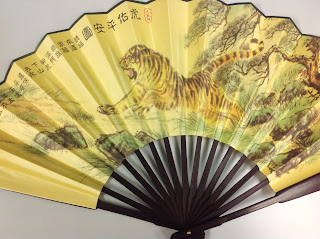 I bought a cute little bolero jacket at the thrift shop but the sleeves were too tight. So I cut a vent from hem to seam, hemmed the raw edges, and added a strip of white grosgrain ribbon at the hem to make them peek-a-boo sleeves. It turned out quite well.


It's been an unusually cool summer so far. Our hottest day has only been 96F (35.5C), which hasn't happened since 2004. There's been a lot of rain. Too much for it to soak into the ground, so there's been quite a bit of flooding. One day, the place where I work got 5" in a matter of a few hours. They are still fixing the damage that caused.

My aunt at the coast has decided to move to Florida, to be closer to two of her children. Her house really is too big for one person; shoot, it was too big for two people, but now that my uncle is dead, she has no reason to stay there. Although, it was great for hosting the kids and grandkids. It had 5 bedrooms plus a mother-in-law apartment. Add in the couches and air mattresses for the kids, and much of the family stayed in her house for my uncle's funeral. 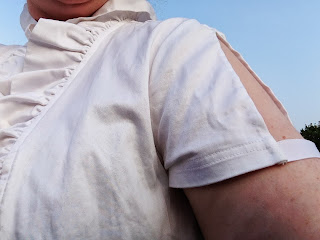