NC Regional Lacemakers and other stuff

Saturday was the yearly meeting of the NC Regional Lacemakers. I finished the last baby bootie. I attended Karen Kurella's talk about what to do with old lace and how to identify machine made versus handmade. There were many of the local tatters there and Tatting Corner came down from Indiana. I think we may have made it worth the drive, even with it only being for one day.

I have decided what to make for my State Fair project. I have a lovely, lightweight cotton scarf/wrap in blues, purple and pink. I found thread to match and I'm going to put an edging on both ends. It needs the weight to keep it from floating off. The edging is number 18 from Anne Orr's book number 13. I'll be using silver/white beads for a little extra weight. Optional, add motifs to the corners. 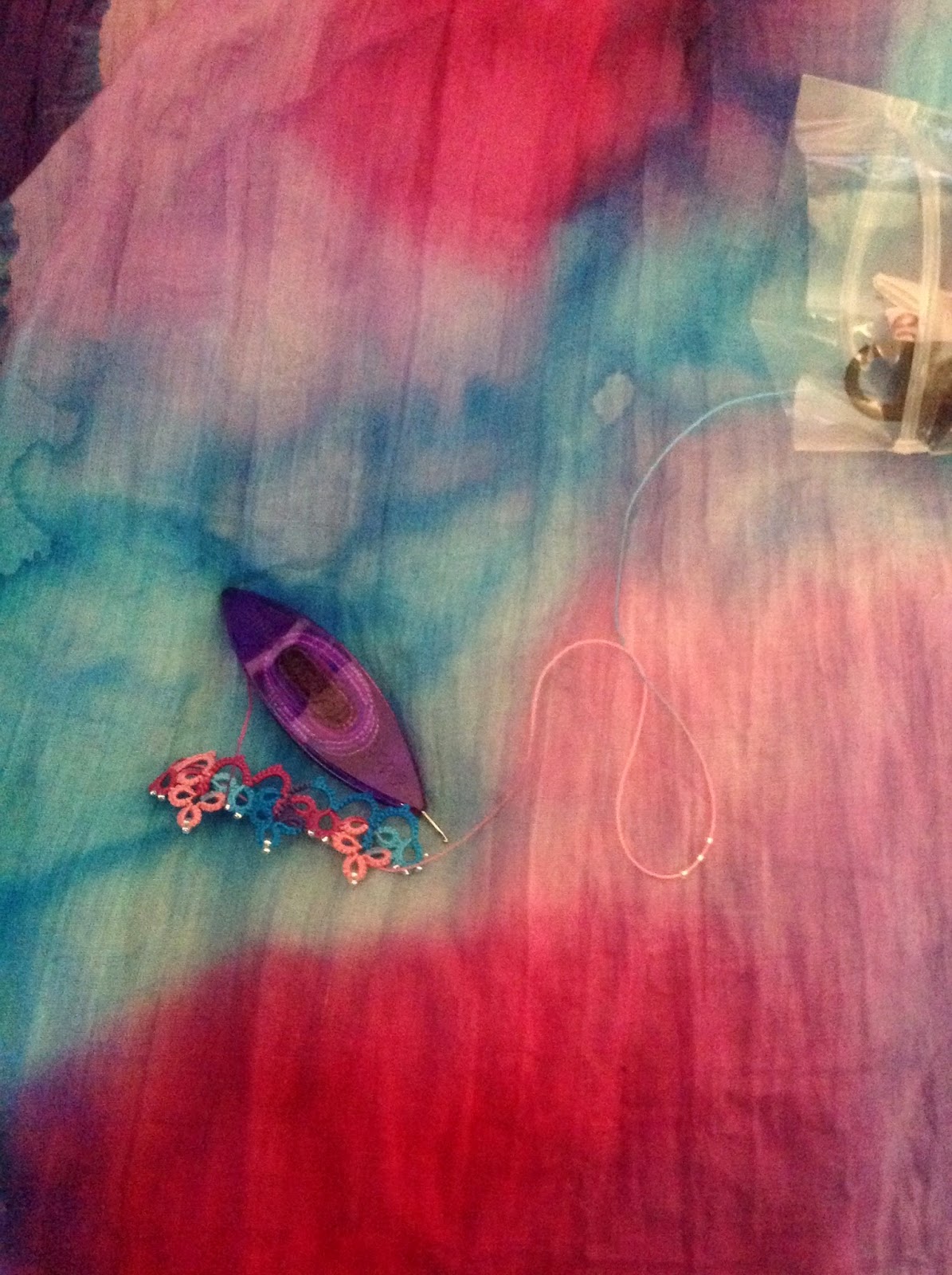 I recommended Kaye Judt's Oh My Stars to a new tatter. It's quite nice for its stage by stage pattern progression. The first star is very simple, rings and chains. It includes front side, back side tatting; pictot-size, etc. Each pattern introduces a new technique. The new tatter got started and was absolutely thrilled with it.

I got to show off my bead spinner. I used it to load the beads for my new edging. I also told how to make one, per Martha Ess's instructions from the 2013 Palmetto Tat Days.

I did not get as much done on Sunday as I had planned. I still need to mend that skirt. However, I cannot find my Gingher embroidery scissors! I hope I haven't really lost them, that I just dropped them in my living room (under the couch, maybe?).

Thursday's Deadlands game went well. Our steamship departed Shan Fan in something of a hurry and the captain was working on ways to smooth over things with the city government so she could go back. She planned to do so by faking our deaths. There goes a set of Alis's clothes. We had just reached a comparatively peaceful pool of water, after a somewhat harrowing passage through rough water, when a maze dragon attacked. Those things are pretty much bulletproof, but their eyes are still vulnerable. And they are not really-big-rock proof, as the Doctor (mad scientist) proved when he dropped one on it.

I'm currently working my way through the Phryne Fisher mysteries by Kerry Greenwood. I enjoy them, even if I have to work out some of the words from their context. Or look them up in a dictionary. 1920's era Australian slang is just a touch different than early 21st century American slang. I've read the books before, I'm re-reading. 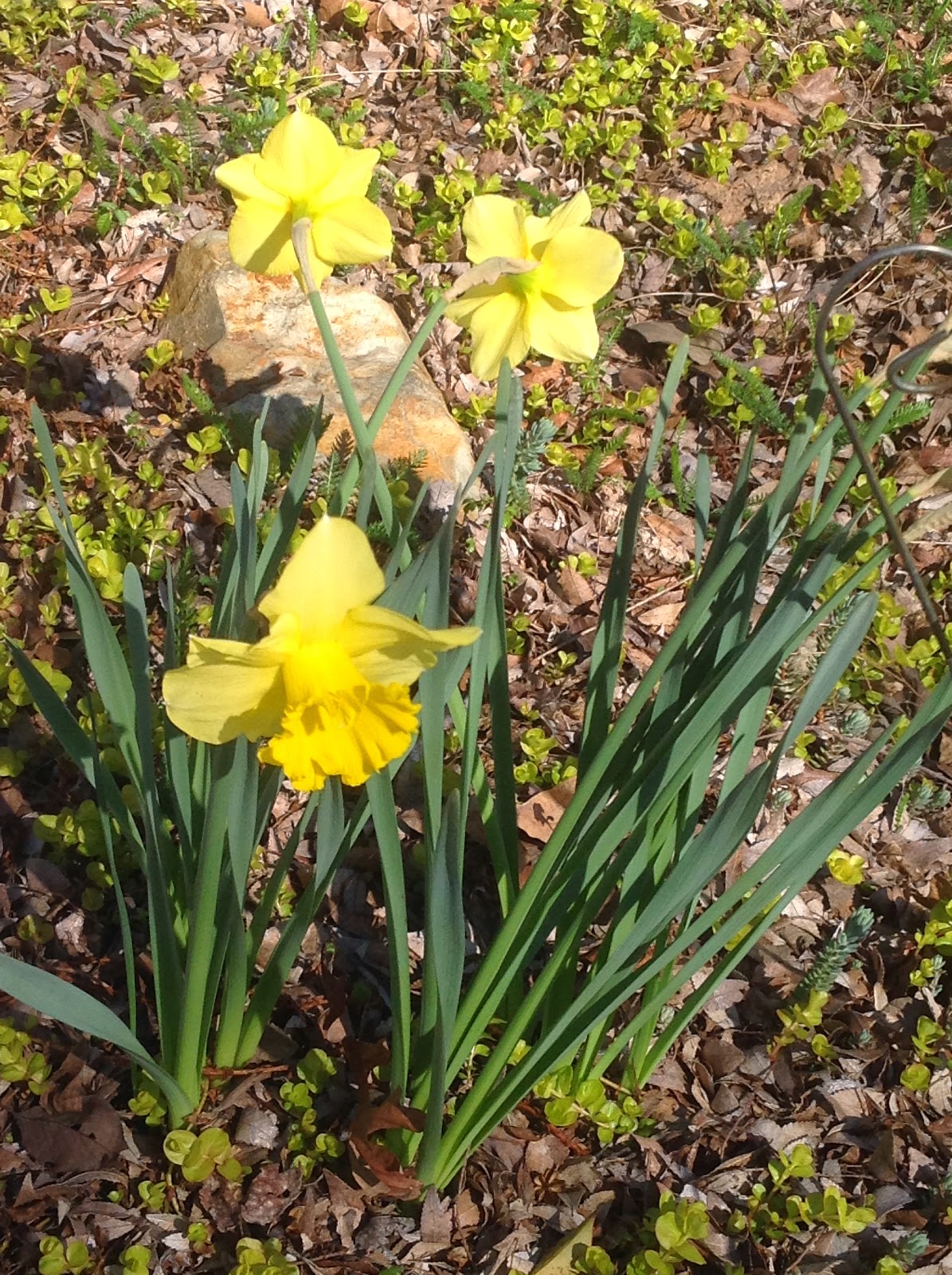 I took this picture outside the Seymour Center (where NCRL had their meeting). I posted it on G+ for my friends who are feeling spring-deprived.
Posted by Sewicked at 7:23 PM No comments:

Late but not forgotten

Great time with CC. I gave her her Christmas present, a handmade blank journal. She loves that sort of thing. She gave me an afghan knitting loom. It can go up to 60" wide. I'd been thinking about making a shawl,this will spur me on.

My wristlets are making progress (Vine Wristers by Isela Phelps). I'm at the thumb hole. I think my tension is tighter than Ms. Phelps and my hands are larger. Which explains why I need 15 repeats and not 9. 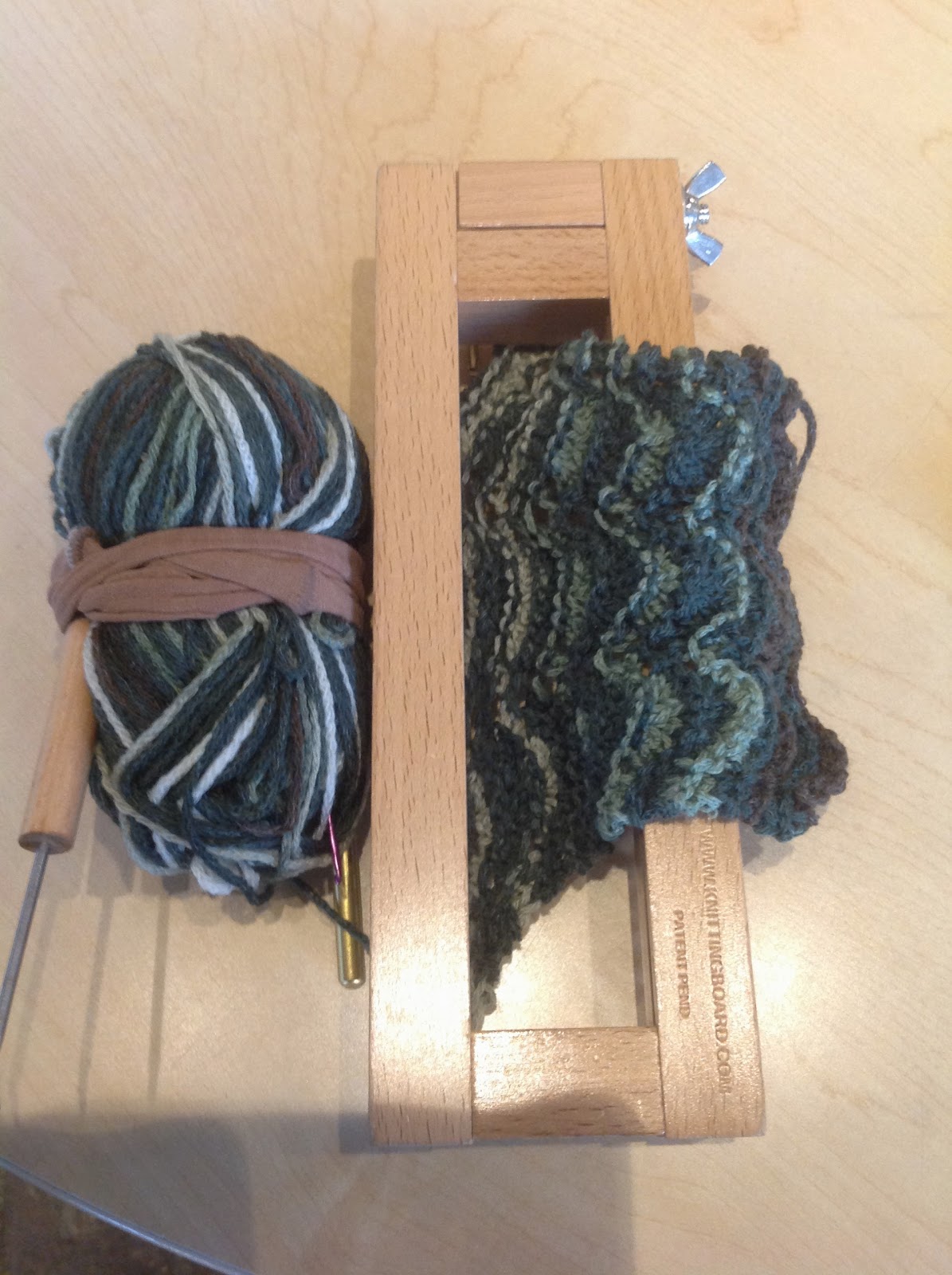 And all done, with a better look at colors. I need to block it and sew it closed with buttons. 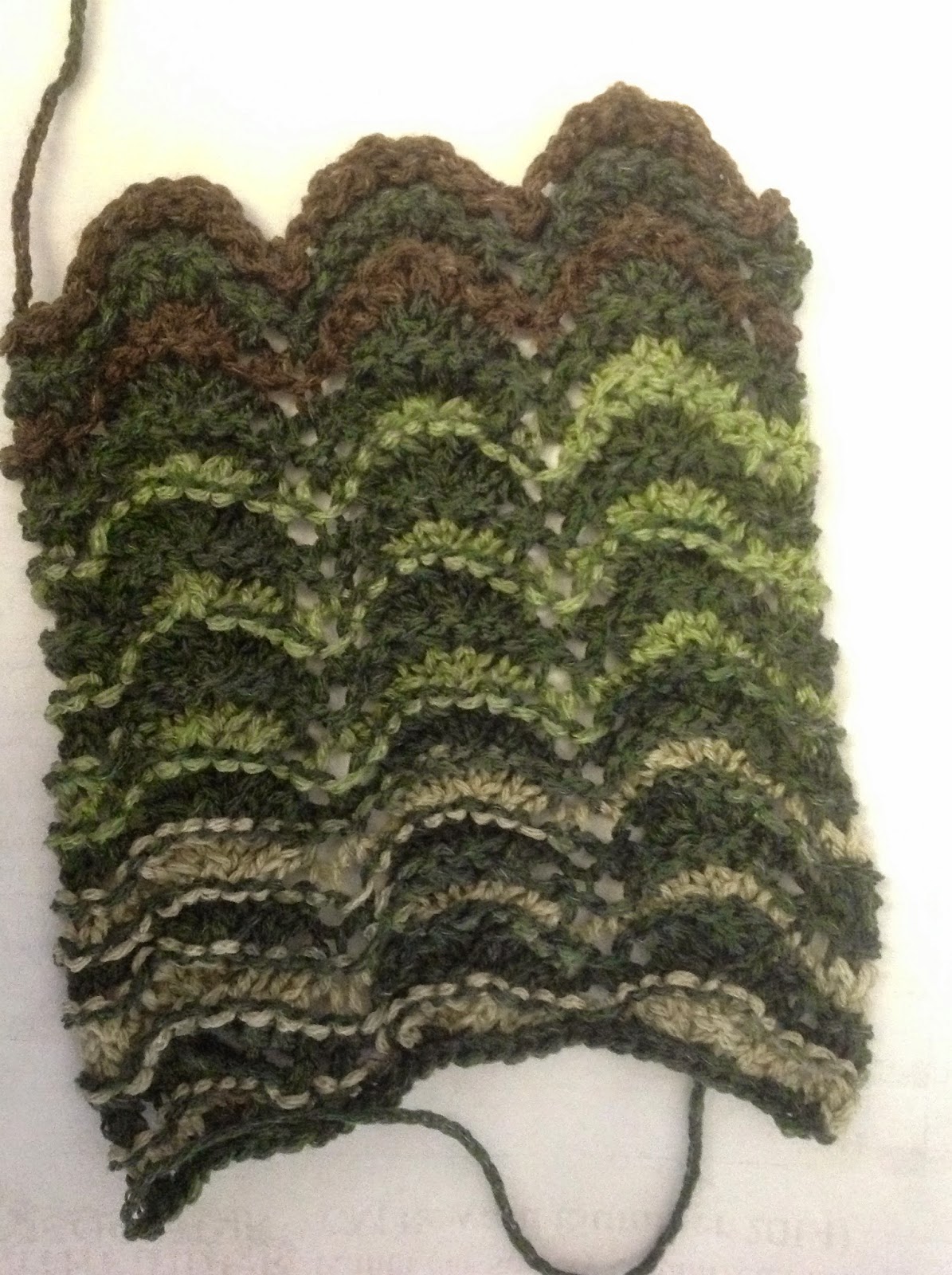 Here's the ring I made for a fellow gamer. She needed a distraction, so I told her I would make one for her. I hope it's the right size. 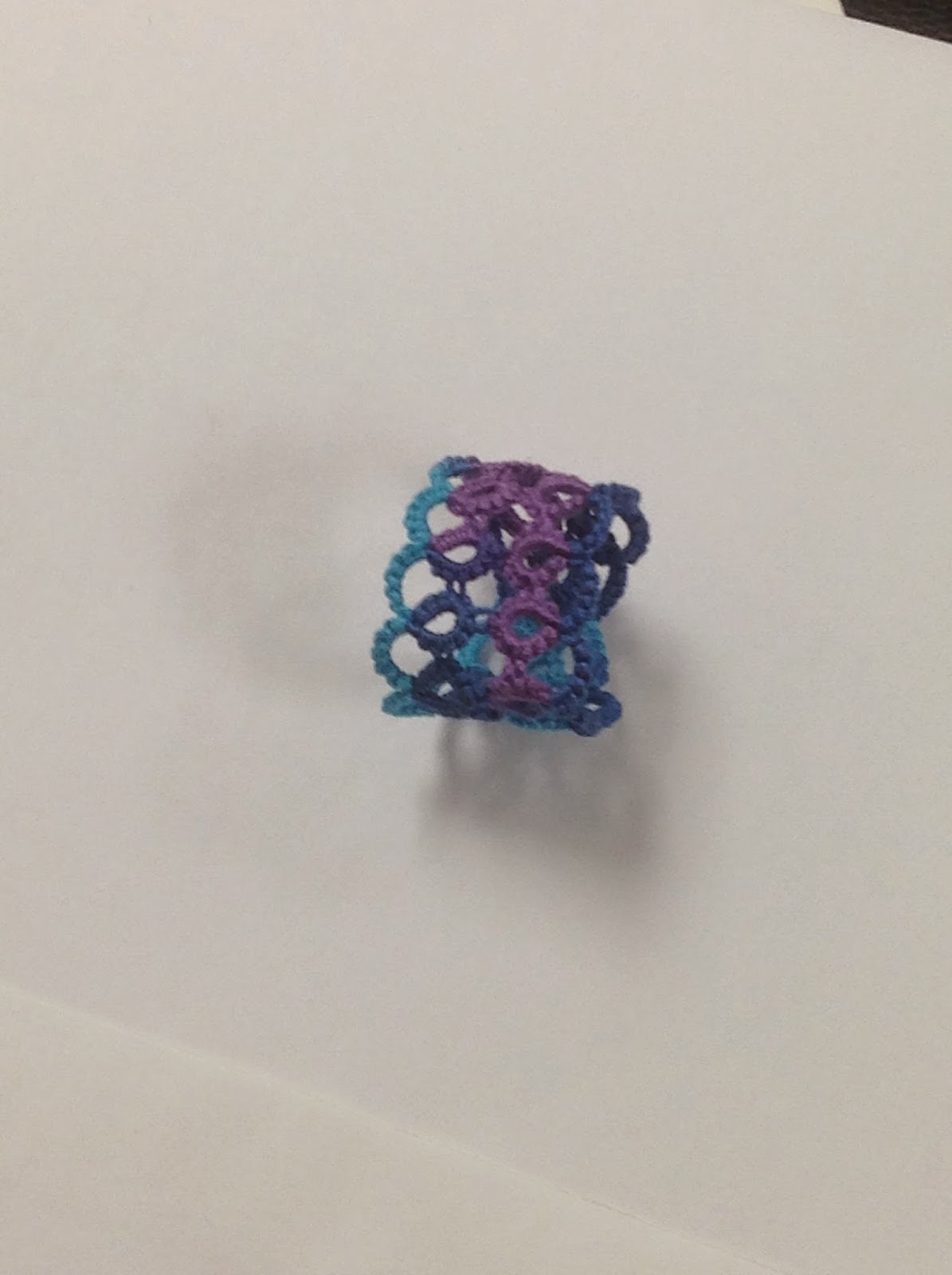 I've been playing with washi tape. This was a nice cardboard box, but plain. It's not plain anymore. 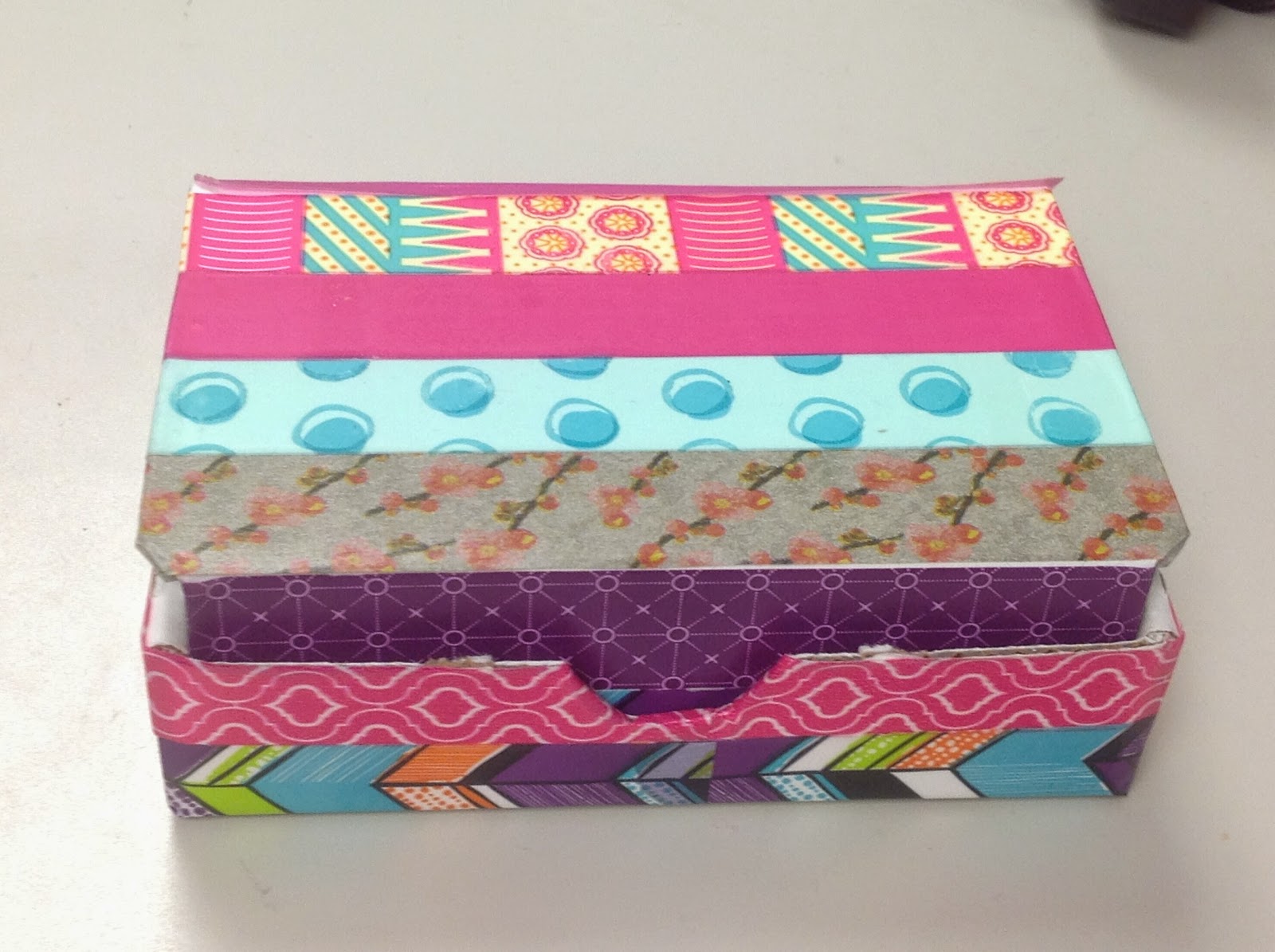 Posted by Sewicked at 5:35 PM No comments:

It takes me about a week to recover from the change in Daylight Savings Time. Suddenly, I'm waking up in the dark again. Add recovery from a cold (yes, it's lingering in the form of an occasional cough) in with that and I am dragging. 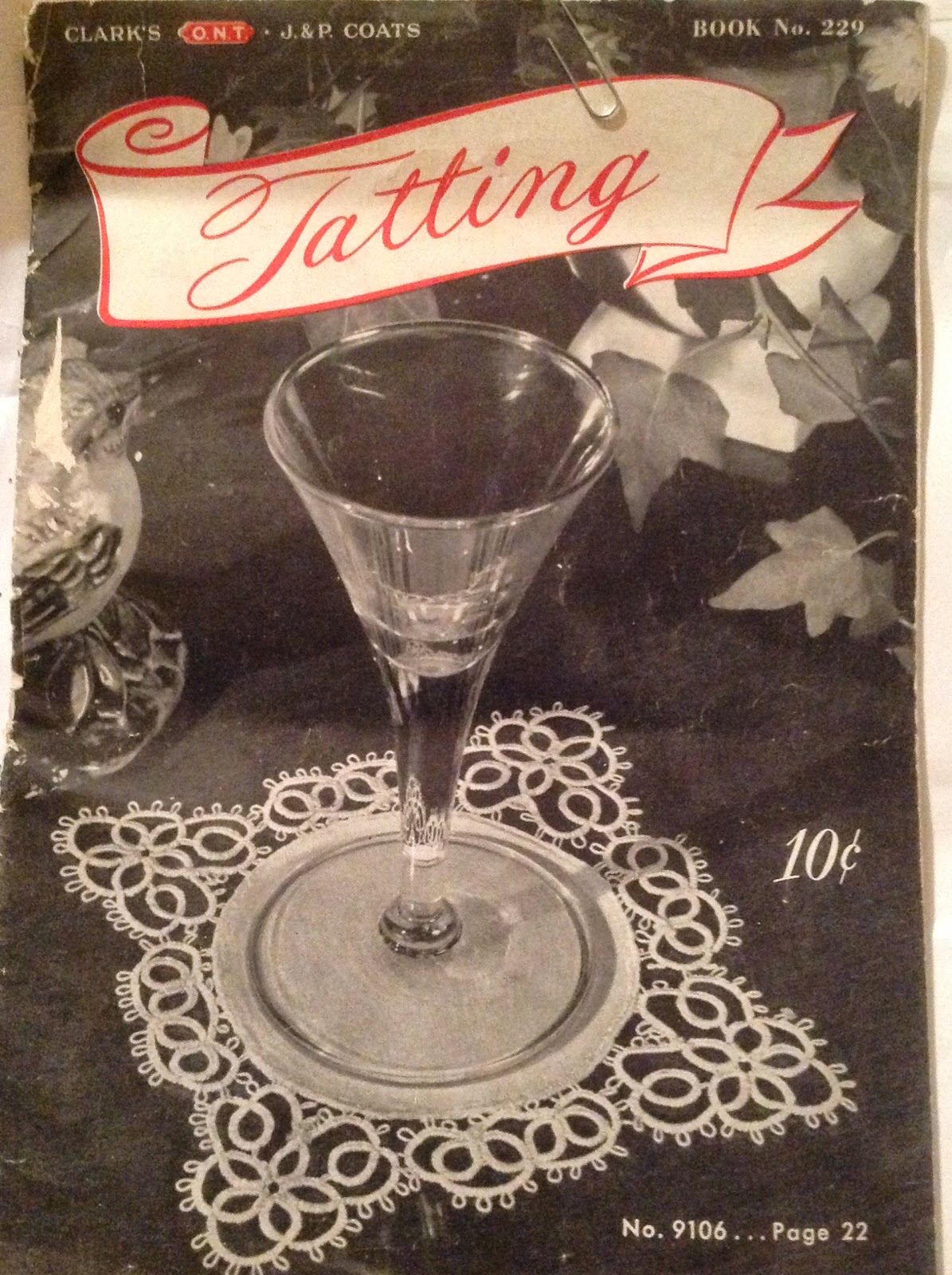 This is the book Louise sent me. She's the wife of Dad's college roommate. It's circa 1946. I sent her a thank you card over the weekend.

This is the other book I got in the mail. I supported the kickstarter for it. And then found out the writer works on campus, too. 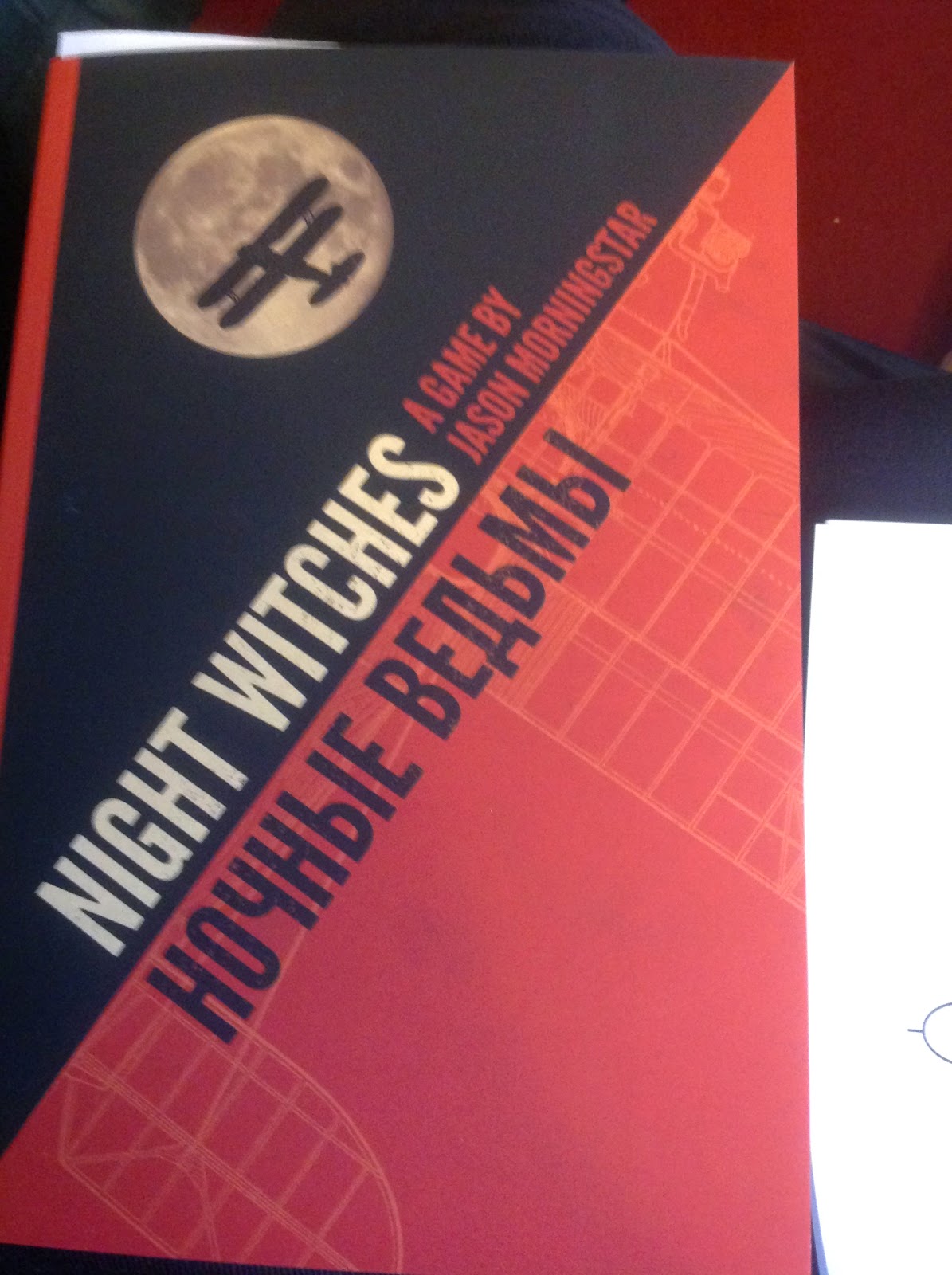 This is from our game Saturday. That hand belongs to our wizard, whose figure is almost visible behind his forearm. He was measuring his range for a spell. Next to the ettin are the other three of us. The dwarf fighter had just finished two ogres and was coming to help us. It was a 'good fight' as another player puts it. I was at half hit points most of the fight. The game is Pathfinder. This Saturday, I'll be playing Mermaid Adventures, with almost the same crowd.

After the game, we went to Casa San Carlo. Their food is so good. For once, I did not have the blue crab ravioli. I had the portobello ravioli in marsala wine sauce.


The mother of a friend from high school is sick. As in, she's in the hospital sick. She used to let us play D&D on her dining table, back in the day. She made us include his younger brother, but J had a bigger problem with letting him play than I did. I made this for her as a 'get well' gift, including it in a Get Well card. I mailed it yesterday.
On my way out the door this morning, I realized the green on my shirt was more teal. So I grabbed the first ball of green thread I found, did a quick search for clover patterns and made this on the way in to work. In my meeting today, I made two more. I need to practice my split chains some more.
On my way into work, I stopped to take this picture. And the Google back up transformed it to a b&w photo.

Tonight is my date with CC. We usually have it the first Tuesday, but I was sick and the second Tuesday she had a meeting. I'm looking forward to it.

Posted by Sewicked at 6:30 PM No comments:

Sir Terry Pratchett died today. We lost Leonard Nimoy and that was a blow. But I've read most of Pratchett's books, over and over. He spoke to me and he was a part of my life in a way no actor, no matter how gifted an individual, can be. We lost my grandmother to Alzheimer's and years later she died. I read a book on Alzheimer's and it was a good book, just hard to read sometimes. That creates an extra resonance to his death.

My cold pretty much wiped out my productivity. I haven't done anything with the baby booties since the tatting meetings. I tried to make a cross for a friend's sick mother. Here's a tip, if you are making alterations to a pattern, note those changes on a copy of the pattern. This tip brought to you by the fact that three-armed crosses are not a thing.

I thought I was caught up on my correspondence yesterday. Then I found two more letters which need replies. I feel bad because based on where I found them, I had planned to reply to them before the others I wrote early this week.

My copy of Night Witches arrived this week. I will be taking it to gaming tonight. DR and SR (no relation) both want to see it. And funny enough, I'll be having lunch with the designer tomorrow. We work really close to each other, it turns out.

It's a short wall of text this week. Sorry.

Posted by Sewicked at 7:11 PM No comments:

Sorry this week's post is late. I blame DST. I'll see if I can get it written and posted during lunch tomorrow.
Posted by Sewicked at 10:56 PM No comments:

Email ThisBlogThis!Share to TwitterShare to FacebookShare to Pinterest
Labels: Late

I hate having a cold

Revolutionary thought, huh? It started hitting me on Saturday, during the tatting meeting. I rested the rest of the day, all day Sunday and I've been off work the past two days. Resting.

We made it to supper on Wednesday. It was excellent food and we were the last to leave. The snow was starting to stick to grass and roadsides as we left. I got most of the way home before it started sticking to the roads. It was a wet, heavy snow. Really pretty. 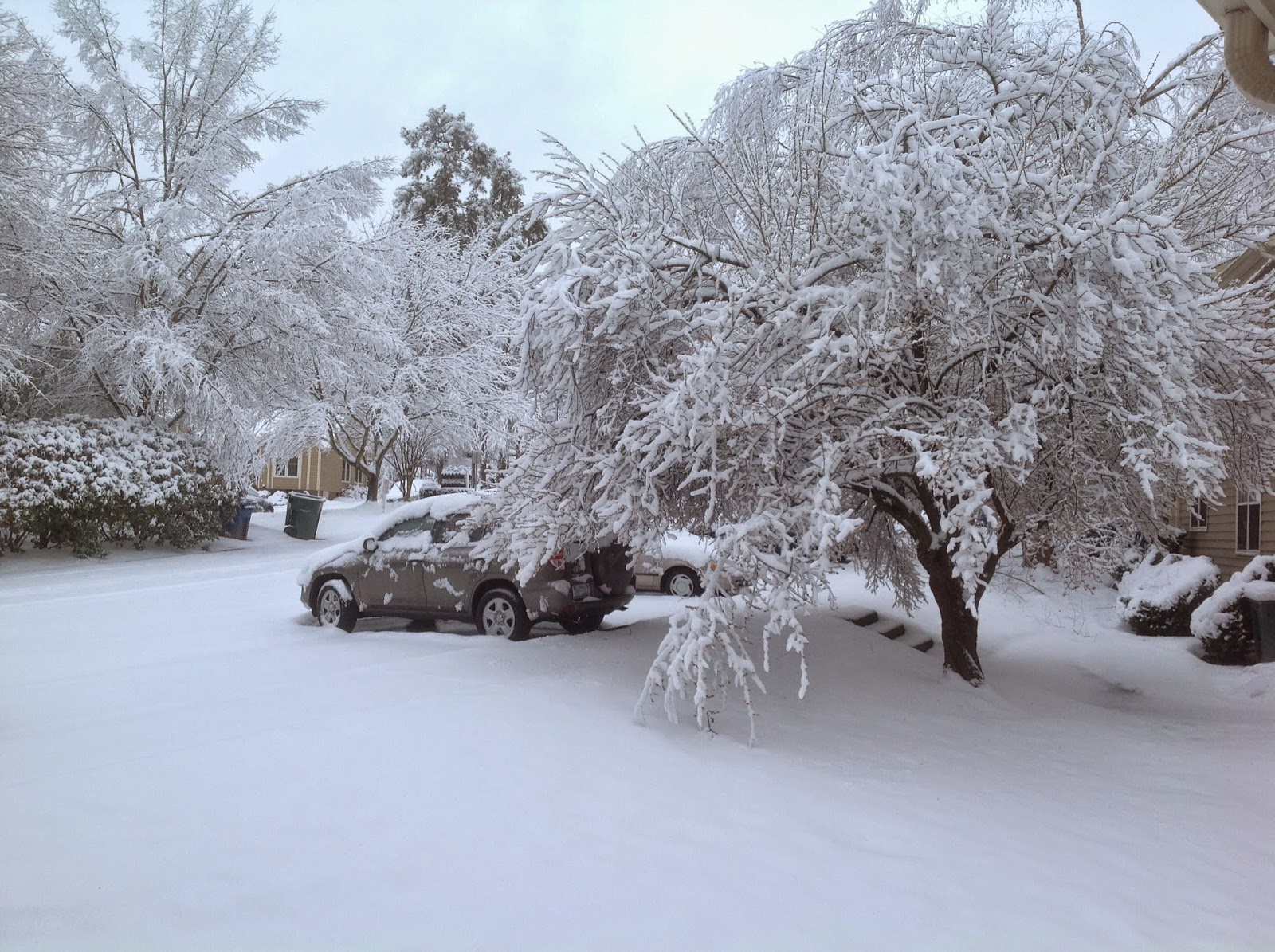 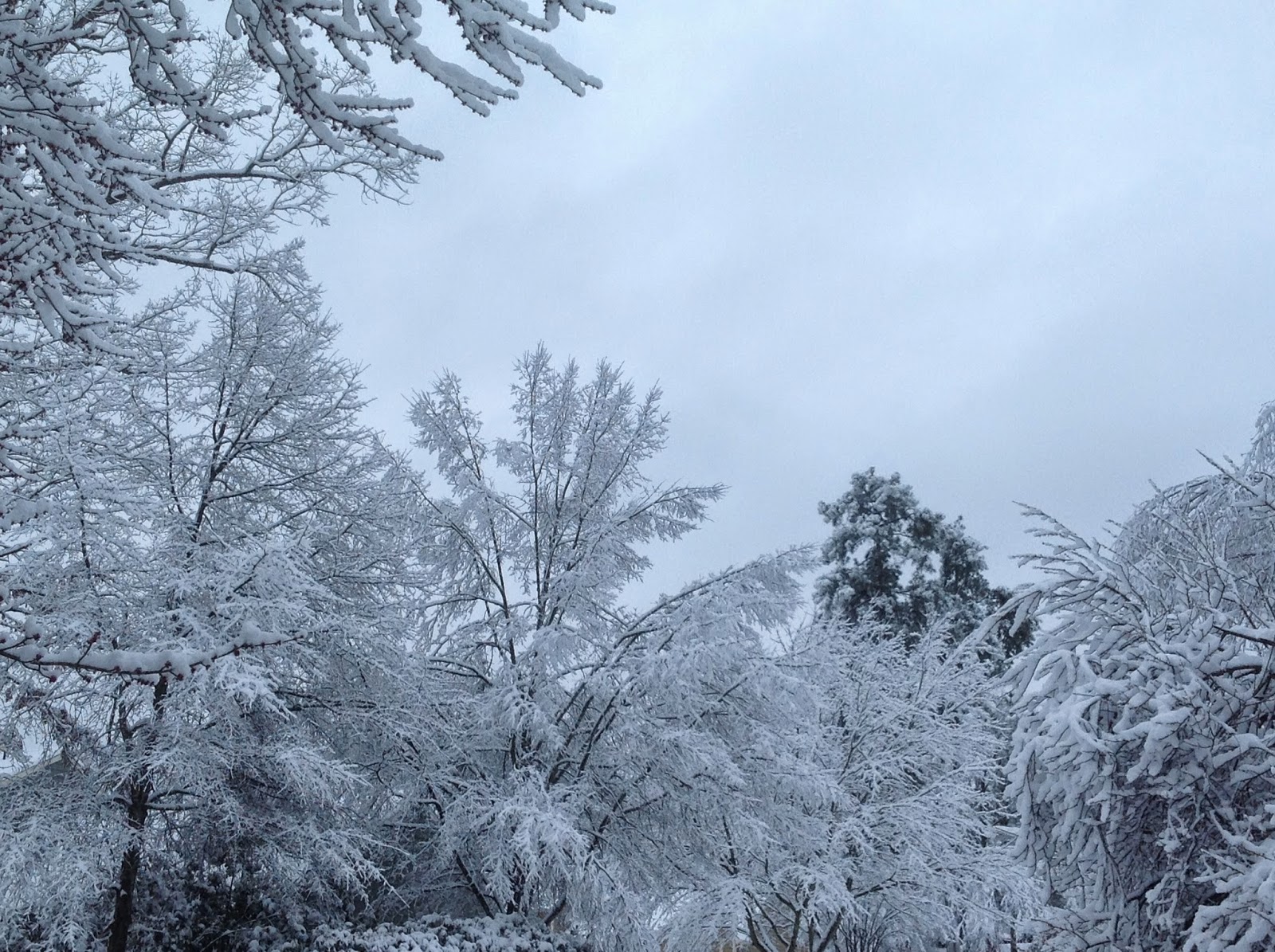 And really heavy. Our transformer blew a bit after 6 am. We made it through most of the day and the snow started to thaw to slush. 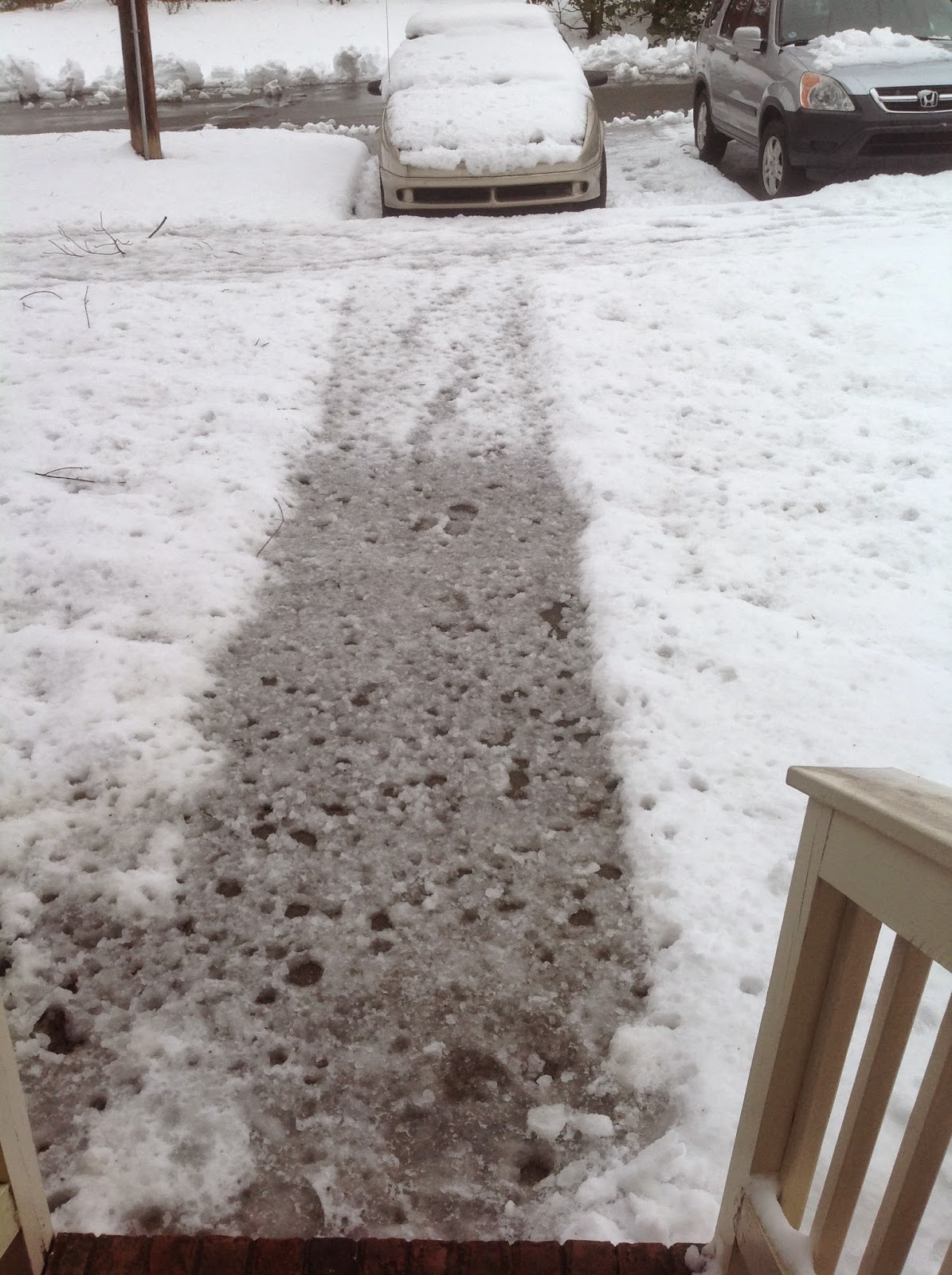 We checked when we should expect our power back and the estimate was 11:45 pm, Friday. That's the outside prediction of course, but even 12 hours earlier was just too late. We went to R's house, because she had gotten power back mid-afternoon. The next morning work was scheduled to open at 1 pm. I checked the bus schedules. It would take me about two hours, one way, to get there. I used vacation leave instead.

We got home late morning on Saturday. I grabbed a couple things, ate lunch and went to the meeting. I missed my turn, distracted by a car going 10 miles under the speed limit. I ran into....traffic. They were cleaning up an accident and I was about an hour late to the  meeting. Luckily, it's  a very relaxed, come and go, meeting. Leigh was talking about her website, the tatting & other craft magazine bibliography. She convinced me to do some work on the wikipedia entry for tatting. It really needs updating.

I finished one baby bootie. And started the next one. 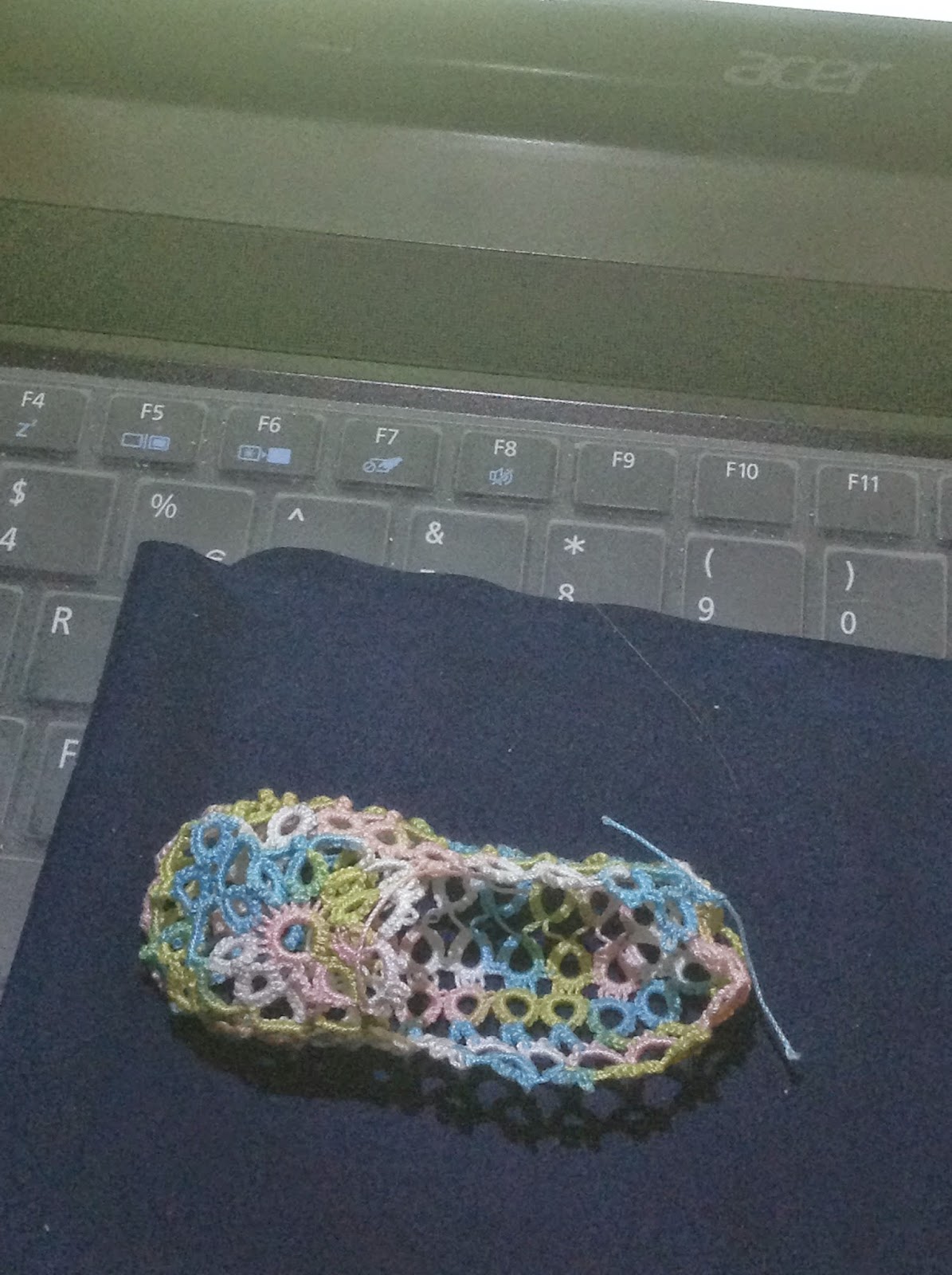 Since then, I've spent a lot of time coughing, sneezing, and trying to nap. Yesterday, I emailed my boss instead of calling because my throat felt like I'd been gargling glass. Ouch. And I was barely intelligible my voice was so rough.

I do not have the flu. I checked my symptoms. And I am improving, but kind of slowly. Yesterday was the worst. I've made 3 jugs of tea; I just heat a cup at a time to drink it. Saves me both time and energy over making my tea one cup at a time.

I'm still playing Pathfinder Online. It's really sad I can't be away from the keyboard unless I'm playing with someone else. Because of all the PVP. It's still early days and stuff is still being patched and installed on a weekly basis. They installed looting before they installed the defenses. I was relying on the AI NPC guards to protect me in town. Until my character got killed while crafting. Yeah, that left a sour taste in my mouth. As part of the kickstarter, I have a few months of free play. So far, I have not had a play experience that encourages me to buy more time.

I still have my 'practice' MMO, Lord of the Rings Online. I only started playing to practice for Pathfinder Online. I really prefer the PvE experience, which I knew I would. My experience with PvP has emphasized this.