A day late, no dollar involved 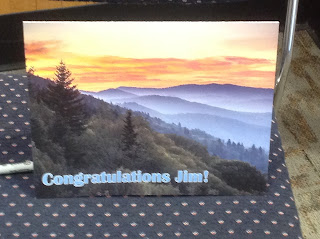 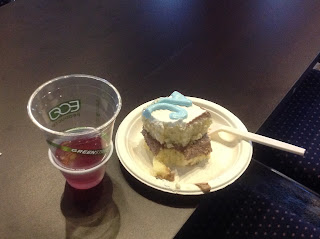 Wednesday afternoon, was the retirement celebration for my coworker, Jim. Here's a picture of his card and a slice of his cake. It was tasty, btw.

Wednesday night I and JJ went to a stories and music of Scotland talk. A group is trying to raise enough money to endow a chair to study Scot and Gaelic life in North Carolina. It was really warm that day, so I just wore my shawl, no jacket. As I left work and went to meet JJ, I realized, 'uh oh, it's really cold and windy. I'm going to freeze tonight.' We left supper (running late) and it was more of the same. The stories and music were very interesting and I stayed just a little too long.

JJ walked with me to the bus stop and I had juuust missed the bus, and the next one was in an hour. At least, it was much warmer on the walk to the bus stop. We went across the street to grab a drink and sit somewhere warm. And it was frigid again when we returned to the bus stop, but the wait was only a few minutes.

Thursday was Deadlands. SR and I worked together to take notes using Google Docs. It's different, but effective.

Friday, pretty much at the last minute (only a few hours before it started), I found out about a Scot/Irish/Appalachia music ties, with a dip into Cajun. I alerted JJ and he joined me. There was a reception with Irish food beforehand (corned beef sliders, raw veggies, potato nibblies, etc) and both people were from the same area of Ireland. They are a wife and husband poet and poet/musician. We had a lovely time. It wasn't as late and it wasn't as cold, so it was easier to wait.

Saturday we were supposed to play Pathfinder, but MC just got married the week before so instead RW ran Mermaids for his daughter, her friend, RG, and I. CD kept RG's dog occupied while we played. After, we played LotRO. We were trying finish a particular quest. Alas, we weren't quite up to it and kept dying. We played a bit too late trying to finish it.

I was wiped out Sunday with a migraine. As a result, I got almost nothing done.

Got some stuff done, including gathering up my tax info and Mom's. However, I decided to use a tax preparer for Mom's since frankly, hers is more complex than I'm used to. I went by the place today but didn't have mom's id so I need to go get that before the tax prep person can really start (pesky id theft worries).

Here are some spring pictures. 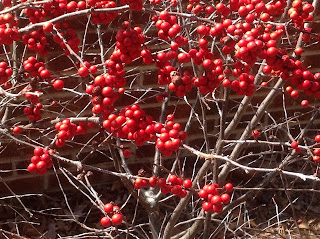 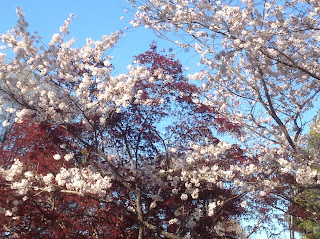 And here's a picture of all of my buffboo yarn, both teal purple. I've wound them into balls. 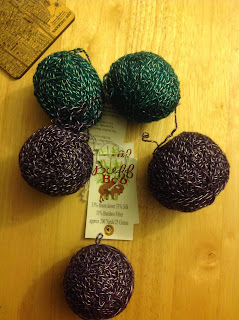 Posted by Sewicked at 9:27 PM No comments:

DR's party on Saturday was fun. His house is a little small (hey, one guy, how much room does he need?) so he rents a picnic shelter at a local park and has a potluck. Everyone brings their one main dish and then share sides and desserts. 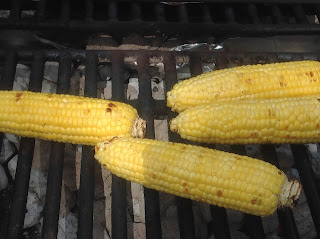 CD started prepping Thursday night. He began marinading the chicken breasts. Saturday morning he made the barbecue sauce, meatballs, and got the corn on the cob ready. Alas, his dessert attempt was not successful (we ended up getting a dozen doughnuts from Dunkin Donuts).

On the way there, it was cold. It was raining. It was not looking good. It did stop raining by the time we got to the park. We met DR's aunt and uncle visiting from Wisconsin, I think. Lovely people. We all chatted and had a good time. The food was delicious. I love CD's honey barbecue sauce. SO YUMMY! The leftovers did not last the weekend.

I took more pictures but I don't have permission to post pictures of people, so y'all miss out. I didn't even get pictures of the Canadian geese grazing nearby.

By the time we were packing up, the day had turned quite lovely. The sun came out and the temperature went up to comfortable.

I finished the red bracelet but I haven't taken pictures yet. I may end up giving to NCRL for a door prize.

I've done more coloring. And took pictures of the pages. 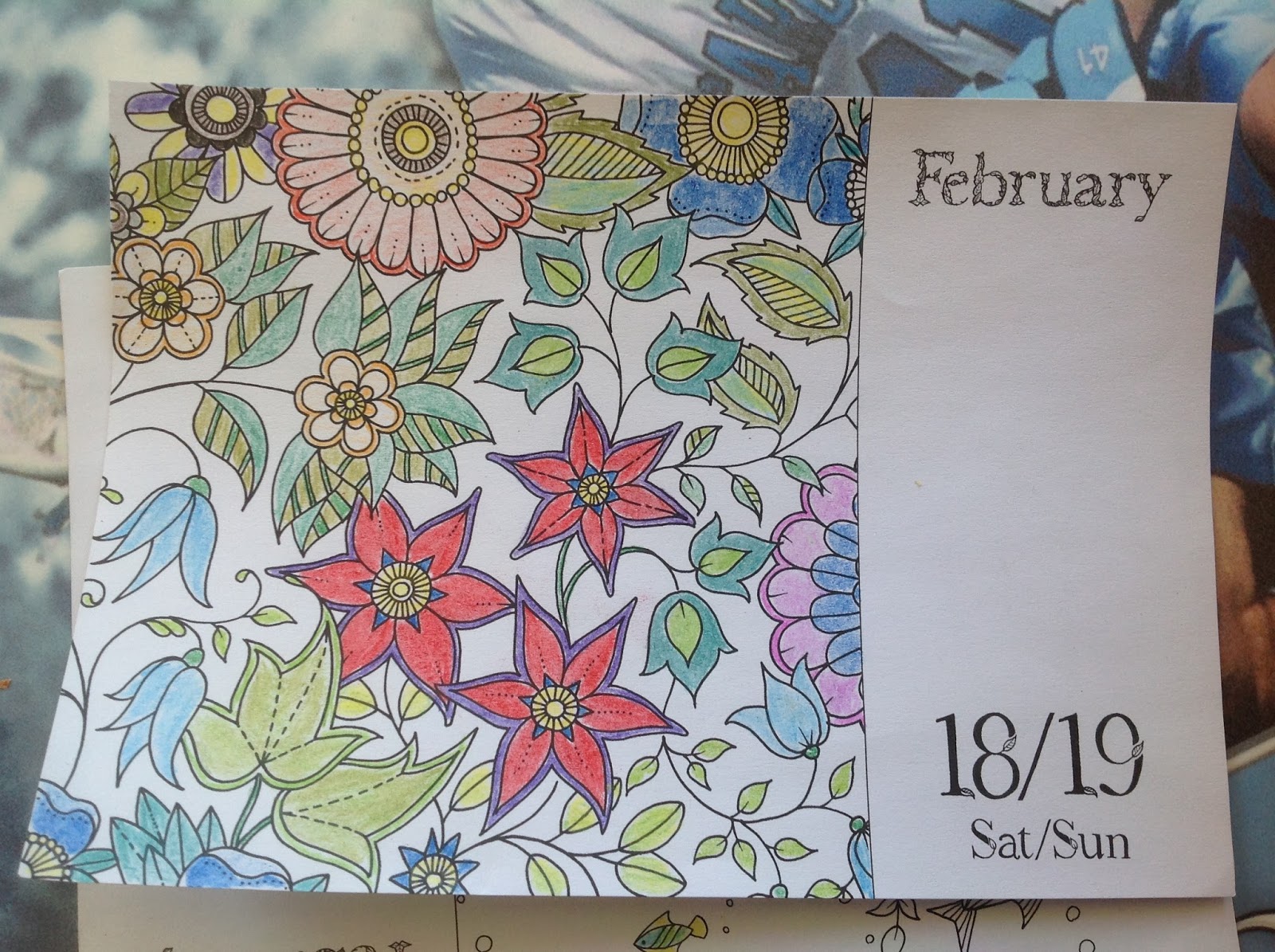 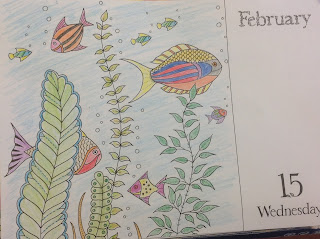 Yesterday was the spring equinox for the northern hemisphere. Now the days will be longer than the nights. Of course, we've already had most of our blooms. 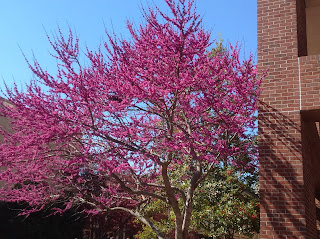 Posted by Sewicked at 8:41 PM No comments:

Depression, I Haz It (and do not want it)

There was a bead show locally this past weekend. I made it as far as my porch on Sunday. At least I got some laundry done. Oh, and I wound the rest of my buffboo yarn. I've even picked out the pattern. I just need to brace myself (review the crochet cast on) and get started. It's really the small victories, I guess.
I think the Duke Power thing is finally straight. Or at least, they finally got my POA in her file. It was 'in the wrong place.' It was suddenly discovered when I asked to speak to a supervisor. I don't know if that's true or what, but I'm still pissed about it.

Still haven't found Carry's present. She didn't want the knitting needles I picked up somewhere, because she doesn't use that kind. I showed her my cable knitting. She noted the cable went odd at the end, until I told her the last two were deliberately in the other direction.

Here are some of the calendar pages I've colored. 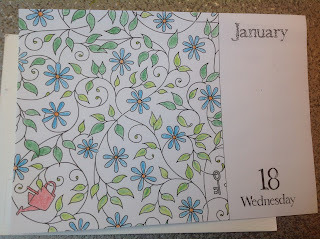 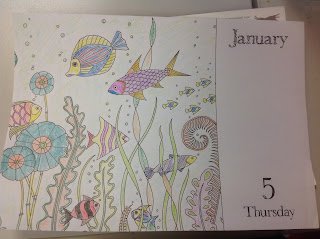 I'm working on another bracelet; varied red with the 2-hole seed beads. I don't have any pictures. However, here is my turtle earrings, ice drop pendant, and bracelet set, with designer names. 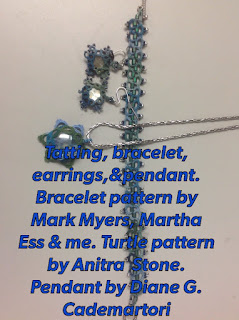 Deadlands game is ongoing. We're discussing using a shared google doc for the game notes. Right now, I talk all the notes and SR fills in when I'm not there, or can't notes for some reason. I try to take them in the 'voice' of my character but it's hard when I'm covering stuff she's not there for.

It snowed Sunday morning. It was gone by 2 pm. I didn't get any pictures but it was powdered sugar snow (looked like someone had dusted the ground).

Mothers and other matters

My mom's short term memory is still very bad. One of her therapists suggested getting her a tablet or the like for intellectual stimulation. I ordered a Kindle Fire for her and got it connected and downloaded a few things for her; a few books (yay for free books) and some games. Then I took a little notebook and wrote down how to operate the Kindle.

When I saw Mom on Saturday, I showed her how to use it, but of course, she forgot. And she can't find the little book I started writing in. I called her today and walked her through turning it on and opening the book she wanted. May I say, 'thank you Kindle for being fairly simple.' If it had been complex, I could not have handled it over the phone.

By the way, the Duke Power thing still isn't straightened out. Yesterday makes my 3rd attempt to get the POA on my mom's file. I am really not happy with them. At least she's no longer paying the power bill for a place she's not living.

Tomorrow is International Women's Day. I can't take the day off, but I can wear red. And I will. And if you are seeing this today (Tuesday - I hope to post it at lunch), Kiva is offering a free trial. I think today is the last day. To give you an idea how well it works, I've deposited about $150 dollars for Kiva loans. I've loaned out $680 dollars. Kiva makes money available to local lending institutions, who lend the money at lower rates, the borrower repays the loan, the lending institution keeps the interest and returns the capital to Kiva, who returns the money to my 'bank'. I can withdraw or loan it out again. Obviously, I loan it out again. Sometimes, I also make a donation to Kiva to help with their operating costs.

Tonight is my date with Carry. I still can't find the present I bought for her. I took it out of the car because I was worried about breakage. What did I do with it?

I finished the loom knit cable. I did cables in the opposite direction for the last two, just for practice. I also went ahead and bought a couple cable needles.

I've been playing with my coloring page of the day calendar. I have at least 2 or 3 that are partially colored, but I can't find them.

US POLITICS AHEAD
I swear, it's like lawmakers aren't even pretending to be serving the people. They're serving the corporations, or whoever has the deepest pockets (see the latest health care bill where a HEALTH INSURANCE company collects the penalties someone pays for being uninsured).