Week before last, the weather was fabulous. I did not have to leave the building for any reason. This past week? 3 days of meetings to go to; including last Tuesday when it was so frigid.

Meeting on Wednesday, late morning. And mid-afternoon, when I finally went on lunch break, power went out in the building. Turns out there was an accident, in the building where I'd had my meeting, and it blew a transformer (and an employee was badly injured, otoh, there's really good care nearby). Apparently power was restored about 7+ pm.

I got a ride to my meeting on Thursday, and a ride back, which I don't always get. The weather was a little cold, but fabulous.

It sleeted, snowed, and freezing rain came down on Friday. Early Thursday evening, work let me know it would be closed on Friday. That was nice. I had two cups of hot chocolate to celebrate. That wasn't my wisest decision. I used almond milk, but the hot chocolate mix had powdered milk, I think. At least, my IBS said it was milk.
I stayed up late, and turned off my alarm clock. Guess what, I woke up about 15 minutes before my alarm clock would have gone off. I tried to go back to sleep, but got up and took a couple pictures.

I went at far as the front stoop and took some pictures once the sun was up.


I played some computer games, finished a dragon, and worked on the 2016 TIAS.


I went out later to get something out of my car. I took some pictures after I saw my footprints are barely visible. I could hear the gas creak, but it held my weight.

CD cleaned off his car after lunch and we went to the grocery store. It turned out our eggs had gone bad. Oops.

Our road was still pretty snowy and icy; one of our neighbors decided to walk to the grocery store. She wanted some exercise and it's only about a mile away. We checked on the way back in case she needed a ride.

Once we got to tertiary roads, they were slushy and secondary roads even had clear spots. The highway looked wet rather than slushy, from what I saw. 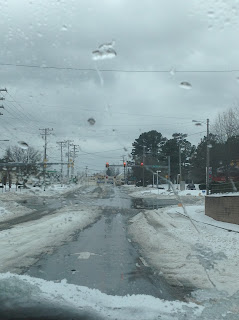 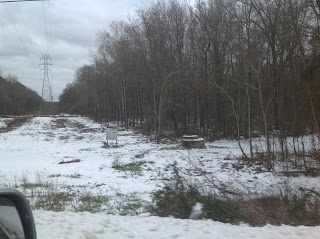 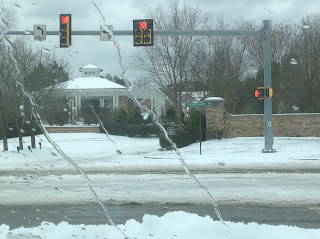 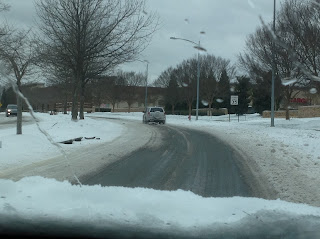 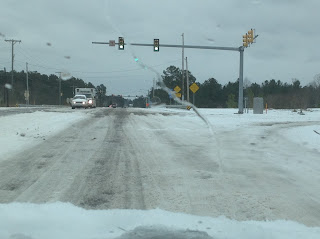 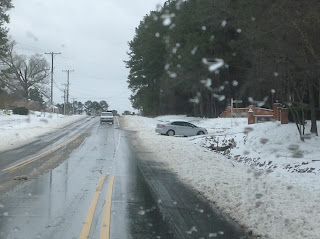 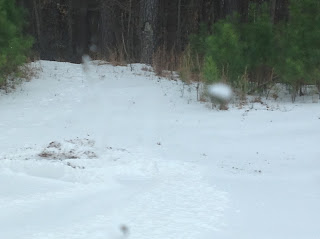 I worked with some size 80 thread (remember the tin of thread?) on Friday night. Messed up and decided to put it away until I had better light. I found a neat little pattern on Saturday (from an old Priscilla tatting book#1 online, figure 20) and well, it's an old book. I finally just wrote it in modern and corrected it. Tatting meeting was cancelled on Saturday so working on size 80 was my substitute, I guess.

Sunday, temperature finally got above freezing, letting snow and ice melt, to run off the roads. Then refreeze when the sun set.

Work started at noon, and my bus didn't start until 3 pm. I went to the park and ride, and fortunately, the temperature rose enough that it only took me half an hour to completely clean off my car. I love the long-handled ice scraper/brush Mom gave me.

Needless to say, the bus was very crowded. I was lucky to get a seat. I was not lucky on the way home. When I got home, my knees were killing me.

This morning, I learned I had listened to the wrong weather forecaster. It did get down below freezing and the road was a sheet of ice. I was happy I had not planned to drive. I took the local bus instead. Walking to the bus stop was interesting. I didn't want to try the ice-glazed slopes of the sidewalk, so I walked in the icy snow and along the ditch. It was interesting hearing the ice crack and watching the crazed cracks form under my feet. It's a shallow ditch so I wasn't stressed about breaking through the ice.

Now I just have the occasional dry, itchy throat and clogged sinuses. So I have improved by leaps and bounds. I've been keeping a jar of tea in the fridge. I make it and then I can just pour it and heat it. It's not best practice, but it's potable and hot. I'm also going through tea at work.


Here are my latest two TIAS steps. I need to check to see if Day 6 is out yet. It might be. I'm thinking frog, now.

CD and I were invited to a game party (cards, boardgames, etc) on Saturday, via one of my co-workers, a fellow gamer. But he wasn't feeling so hot so I stayed home to take care of him. He apologized for keeping me away, but I didn't want him along when he was recovering. CC was at the party, too.

It's gotten very cold. Tuesday's high was around 30F and today it (supposedly) got above freezing. Sunday, it snowed, but I missed it. Mom called to complain (jokingly) that I didn't warn her about the snow. She stepped out to get her paper and there it was! Accumulation! It started snowing as I got home tonight. I was home a little earlier than usual. I caught an earlier bus, the one that's too soon after my leave time to make it unless I hustle.

There was an accident and we lost power. The building was already locked so I didn't wait for the office door to lock and I didn't have to wait for the computer to shut down. Without power and only a flashlight for any light, I just sat at my desk and read by flashlight. The two big things on my to-do list both required my computer. And I'd already done my offline stuff. The other offline stuff requires proper light.

And of course, with all the cold weather, I have meetings 3 out of 4 workdays this week (I was off on Monday). Yesterday wasn't too bad, if you were out of the wind. I could even take off my gloves. Tomorrow's meeting (I'm presuming there won't be enough accumulation to affect work) I may end up walking to catch a bus back to the office. That's going to be cold.
Posted by Sewicked at 7:18 PM No comments:

And I'm really tired of it. I'm not nearly as sick as I used to be, but my throat's irritated and anything can trigger more coughing.

Last Friday was David Bowie's birthday, and he released a new album. Then he died yesterday. He had a big impact on my adolescence and college years. I loved the movie, Labyrinth.

I went to visit mom this past weekend. Her health is still doing good, especially for a woman her age.


In my list of presents, I forgot to include the wallet/coin purse Chris's parents gave me. It's cute.

Classes have resumed and work is busy again. We also have a cold snap this week with low temperatures in the mid-20sF.

I've started playing a new game on my iPad. You collect koi in different colors and patterns and grow them to dragons. Here's one (the 3rd one). 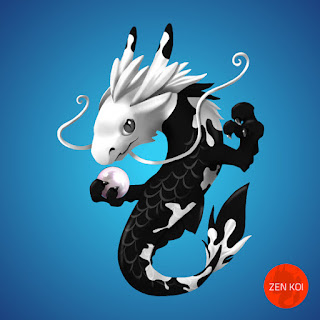 It's mostly morning sinus pressure and a recurring cough. My voice sounds very sexy, though.

Christmas was lovely, despite my cold. I spent the afternoon with CD's family and had supper with them. The next day, CD and I drove to my father's house. Turns out, two bobeches for my stepmom isn't enough, her table display uses 5 candles. CD's car was acting up, not wanting to start, so we took my car. Sunday evening, CD, RG, and I went to see Star Wars: The Force Awakens.

I worked the following week, all three days of it. CD ended up having to work half a day on New Year's Eve but then we went to have supper at Casa san Carlo in Raleigh, with RG. Then JJ sent me a message; his brother died.

JJ decided to go through with the New Year's/late Christmas plans. It took his mind off it and gathered people who knew his brother. His brother was only 39.

To remember what I got this year (my list of things given are in a spreadsheet); a decorative basket with a pierced tin ornament, 3 different spice blends, hand lotion, and a pottery dish from my brother and his family; Dad and my stepmom gave me assorted teas, 2 ornaments, a beaded coin purse, a beaded purselet, and a journal; a candy sled from my stepmom; CD gave me an assortment of books (50 Plants that changed the course of History, Necropolis London, Historic Costumes and How to Make Them, Historic Costume in Pictures, and Authentic Victorian Fashion Patterns), all nonfiction; RG gave me a Hobbit movie soundtrack cd (Battle of 5 Armies); AH gave me an adorable Steampunk hat (that goes on with clips); JJ and LJ gave me a space capsule tea infuser and a T-Rex mug; KL and CL gave me a very nice pair of embroidery scissors and a neat thing to keep/hold them; and A and J gave me a book about Manga CrossStitch patterns.

Played a couple new games over New Year's. Talked, laughed, and enjoyed myself. My namesake liked her new blanket and JJ was really impressed by the new video card; six of us chipped in to get it. One of the people who chipped in was his brother. Now he and namesake can play the video game I recommended, based on someone else's recommendation. A & J asked for a tatted dragon, in dark teal.

Monday, I asked my supervisor for Tuesday off. Tuesday, I went to the visitation and funeral, and then to the parents' house after. The funeral was a graveside service and oh, it was cold. The temperature was in the mid-30's, and windy. I had a blanket, shared with AH. But that didn't protect the back of my legs. The preacher did a good job, and sounded like he knew CJ. At the house, afterward, as usual, there was lots of food. Since I hadn't had much lunch, I dug into it.

I had directions from two different people and got really confused. I ended up touring the back roads and two different counties for about an hour. Finally, I called CD for help. Turned out, I had turned aside about 5 miles too soon, before I hit a main highway.

Last night, I had my monthly date with CC. We both vented and celebrated. One of her sheep died, and her 20-year-old fish died. RG's dog died before Christmas and well, JJ's brother. CC gave me 3 balls of thread, hand-dyed by her. I can't wait to use them.


I started Jane's TIAS today, using the same thread. I only have 1 wing of the dragon left to do.