What do you mean it's only a week 'til Christmas?!

I still have shopping to do. Okay, some of it isn't 'due' until New Years'. And other stuff has been ordered (it just hasn't arrived yet). There's still quite a bit of wrapping to do but I've already been to one holiday party, with presents distributed and received.

My SO, C, has a use it or lose it leave policy, so he's taking a few days off this week. It will give him time to do some shopping, get his car stuff done, and play some games. I envy him. Of course, I have separate sick and vacation leave; sick leave that just stacks up. And above a certain point vacation hours become sick leave hours.

I'm still working on the pink turtles. The first attempt with the new pink beads, well, the bead slipped out.


I need to put findings on my latest bracelet. Progress stalled when I realized I had run out of thread before I had run out of beads. Oops. I had to move the beads to the new thread, then join the threads, and finished tatting, before hiding the ends. The fun never ends.

One of the presents I received is Cathedral, Forge, and Waterwheel. I've just started and I have already had to look up two terms.

Hero Forge has a 3D printer and they're not afraid to use it. They are offering customized miniatures. The basic, somewhat blocky, figure is $15. It's not very detailed. The one offering enough detail to make a good game figure is $25. Guess which one I want? They also have two larger sizes, but they don't interest me particularly. Although if I had a character who was often enlarged, the one size up would be fun to have. They also have an option of you creating your figure and then saving it. You can create, then return to it to fine tune it, before buying it.


It isn't perfect. Some of the hairstyles are limited (I didn't see any styles that involved kinky hair nor were there any side braids) but there is a wide range of faces/features. And the build/bodies have a sliding scale; your character can be short and buff or short and skinny or tall and buff or tall and buxom, etc. And they don't have mounted options. Yet. Maybe they will in the future.


When visiting friends up north, we visited a paint your own pottery place. I finally got to paint a yarn bowl. I picked it out and then couldn't decide what to paint on it. I finally got the simplistic idea of painting a ball of yarn in the bottom. I added a strand going to the yarn slot. What to put on the outside, though? It came to me! A scarf. I painted a knitted scarf going around the outside of the bowl, starting at the yarn slot.

Posted by Sewicked at 6:27 PM No comments:

I hope everyone's winter (or summer if you're south of the equator) is going well.
Here are my State Fair entries
The dragon (red ribbon) 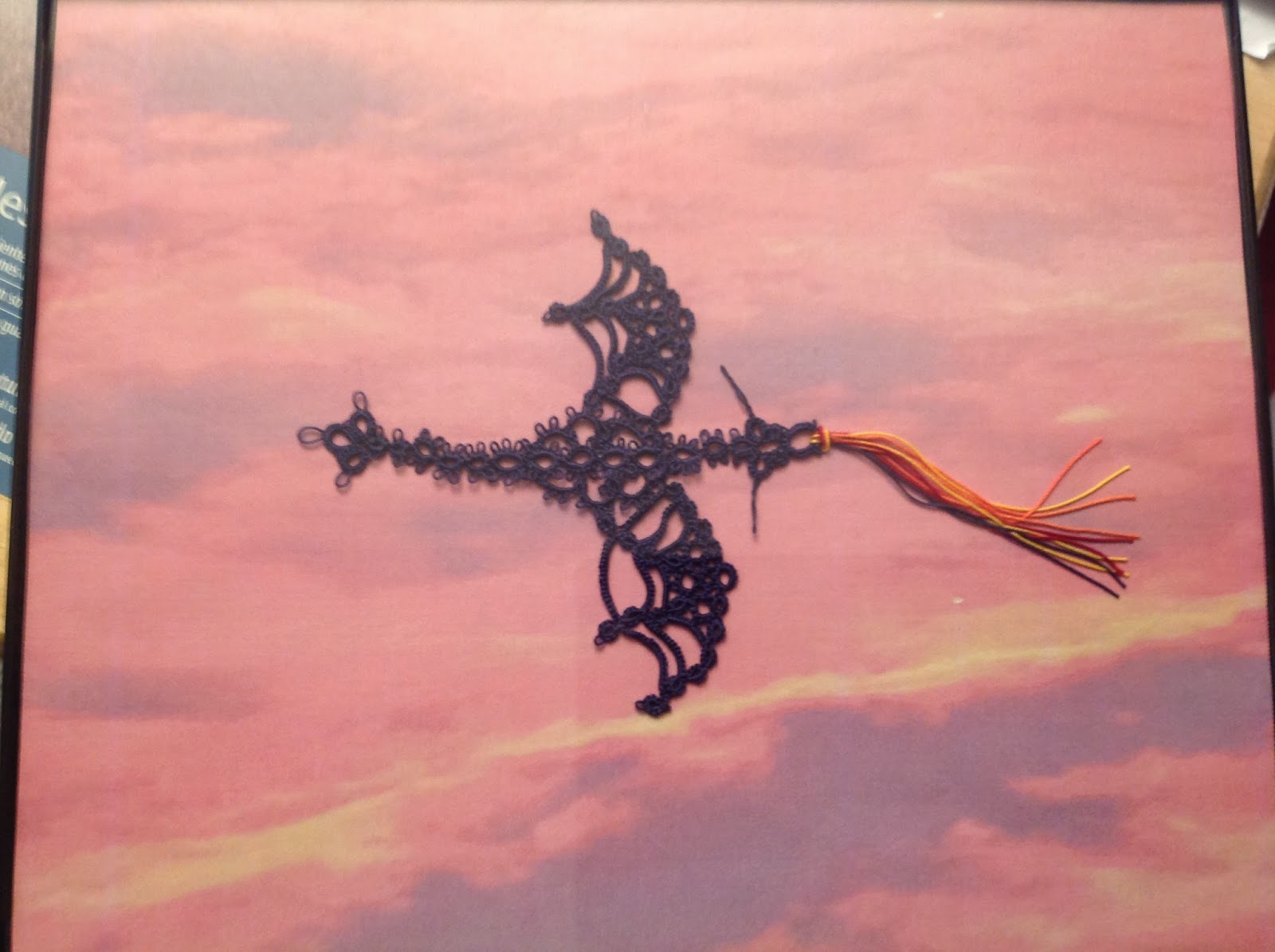 And the booties. No ribbon on the booties; wrong category. Except, looking at the categories I can't tell what the right category would be. I've contacted the fair people to elaborate. 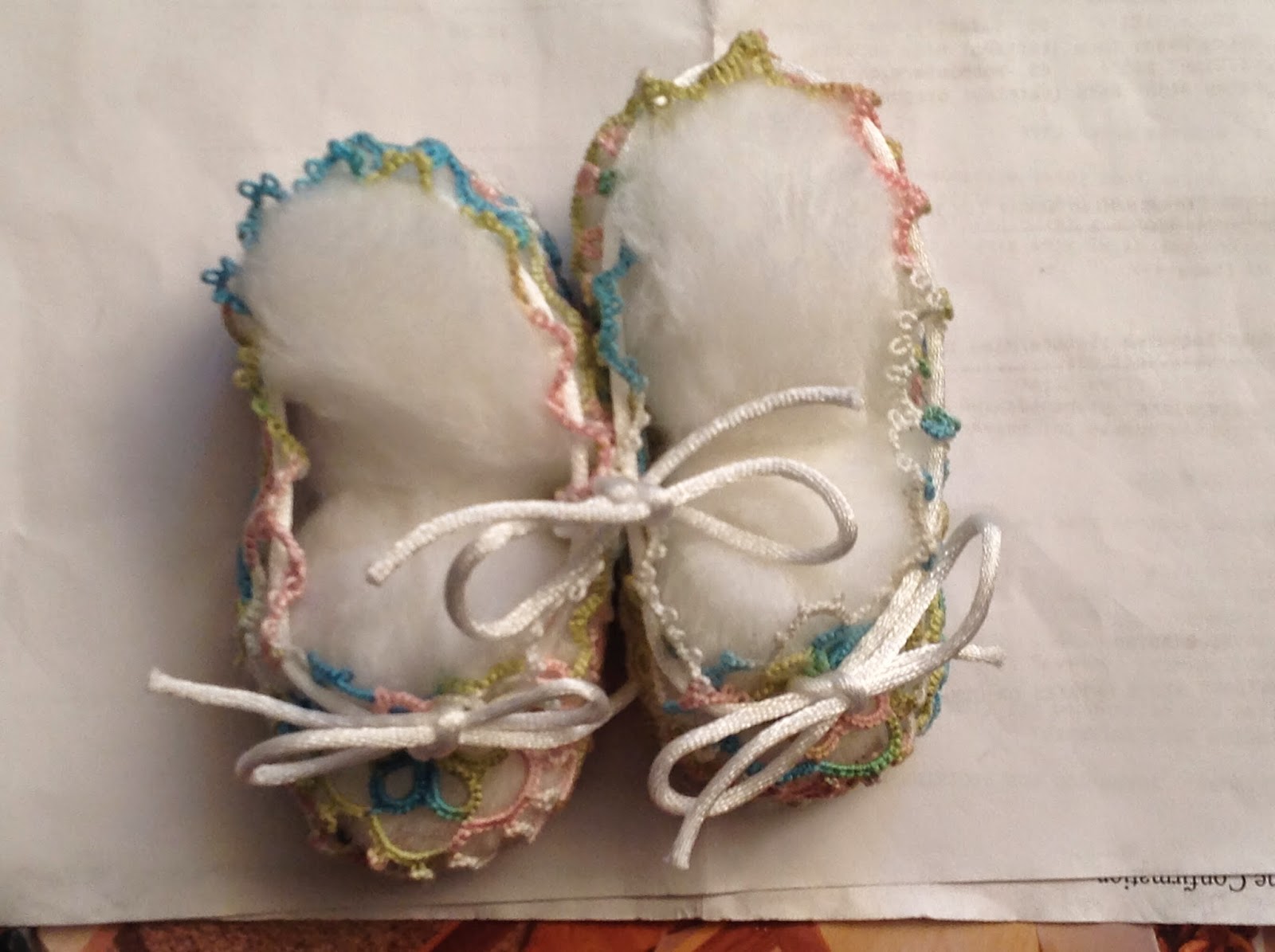 I finished my project 365. Now I won't be so 'must take picture today', but I'll still keep my eyes open for picture possibilities.

Dad came to have lunch with on Thanksgiving. We had a lovely, long talk. He showed me the listing for the house he built in 1958. Tiny house, but gorgeous views.

I've made some turtles: see. I'm working on more bracelets.  Here are some I've made. 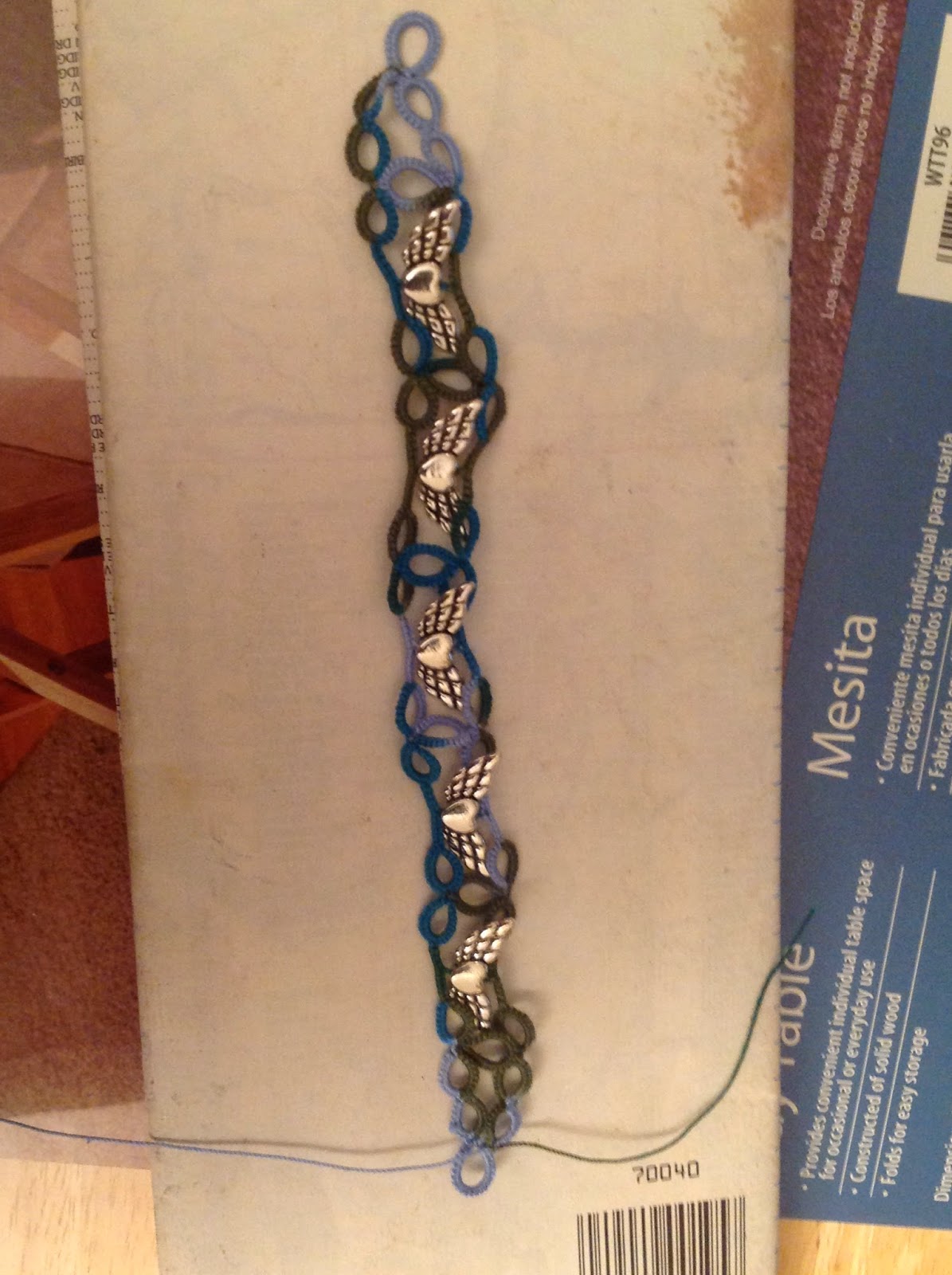 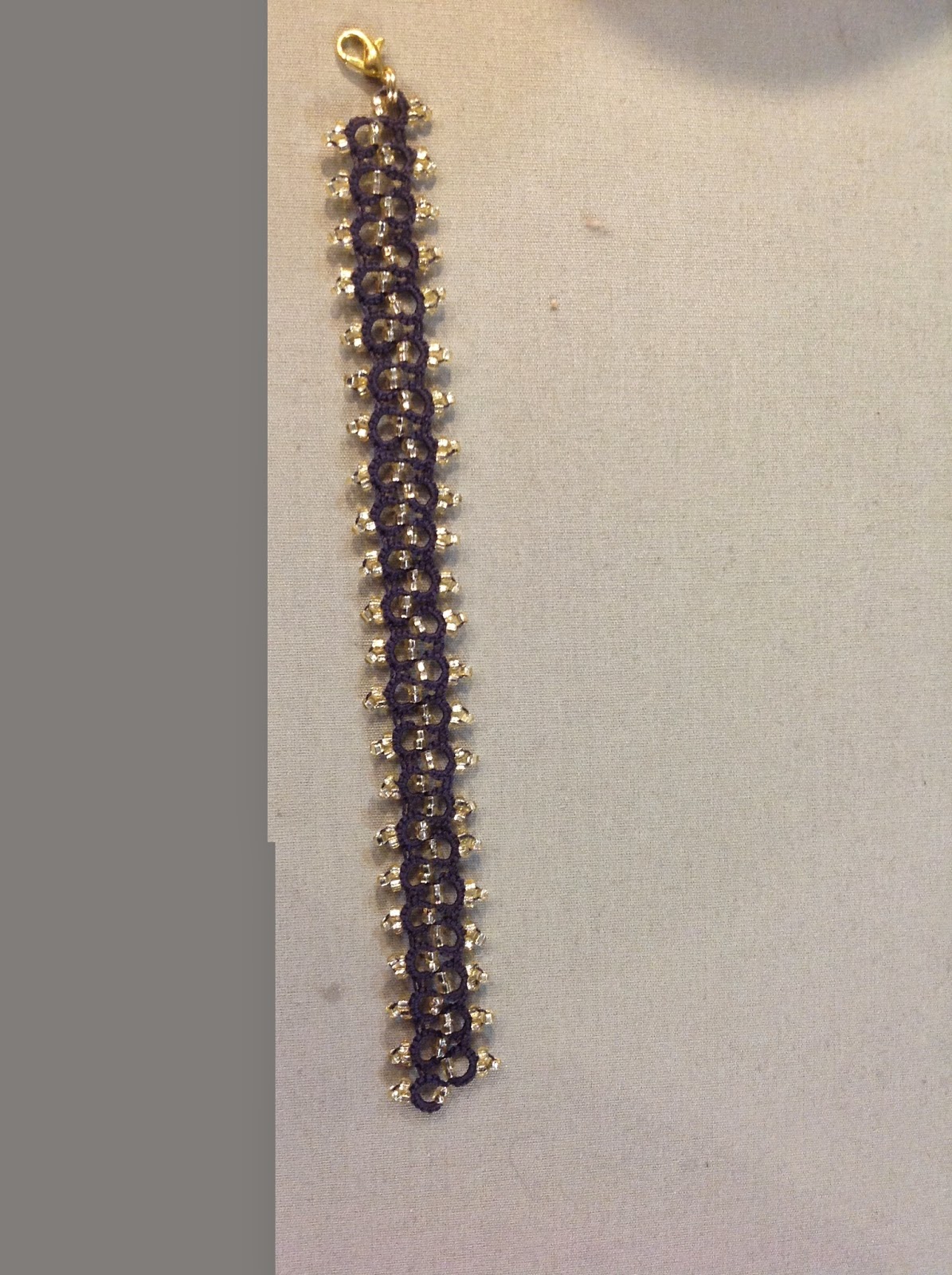 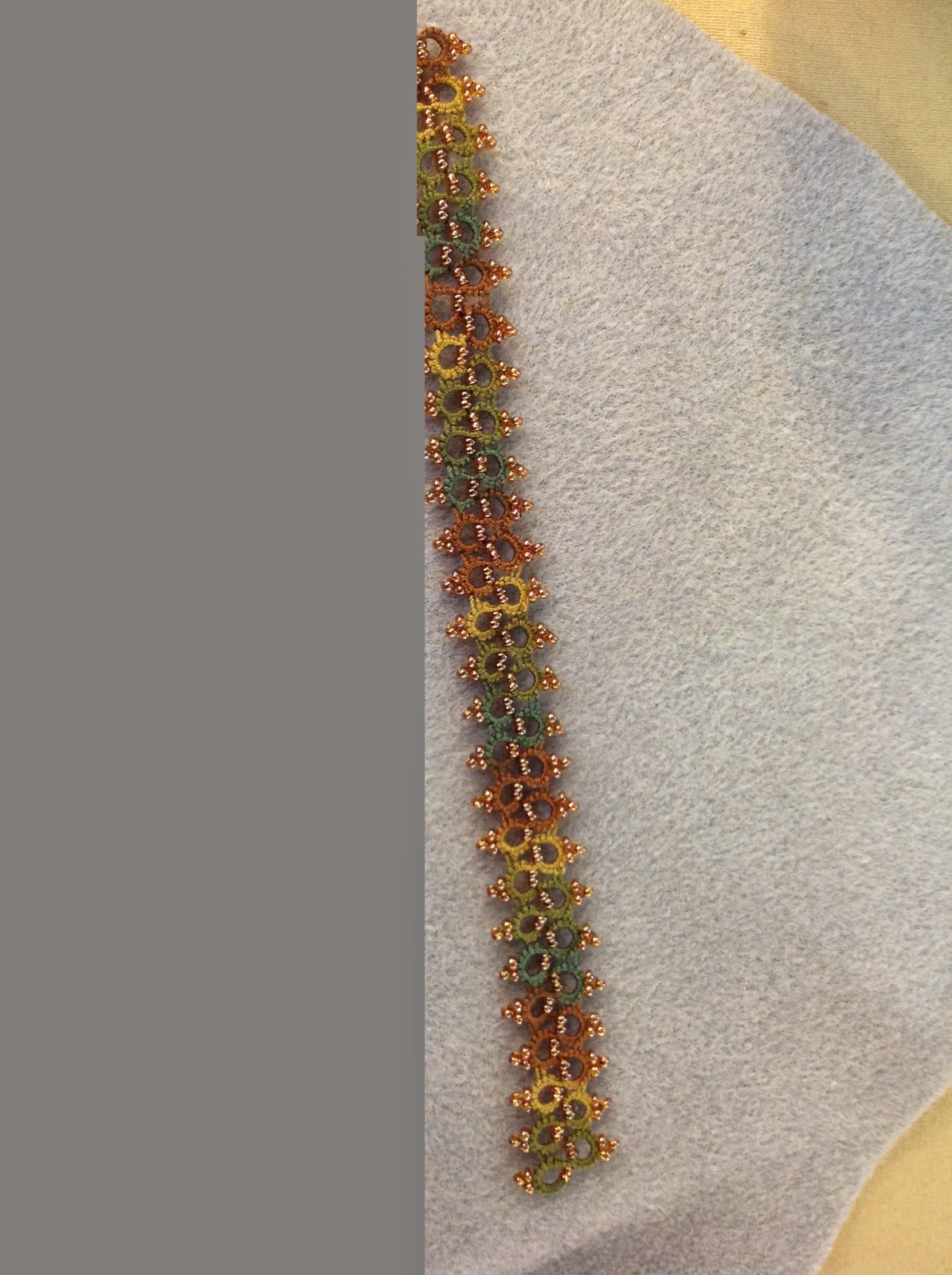 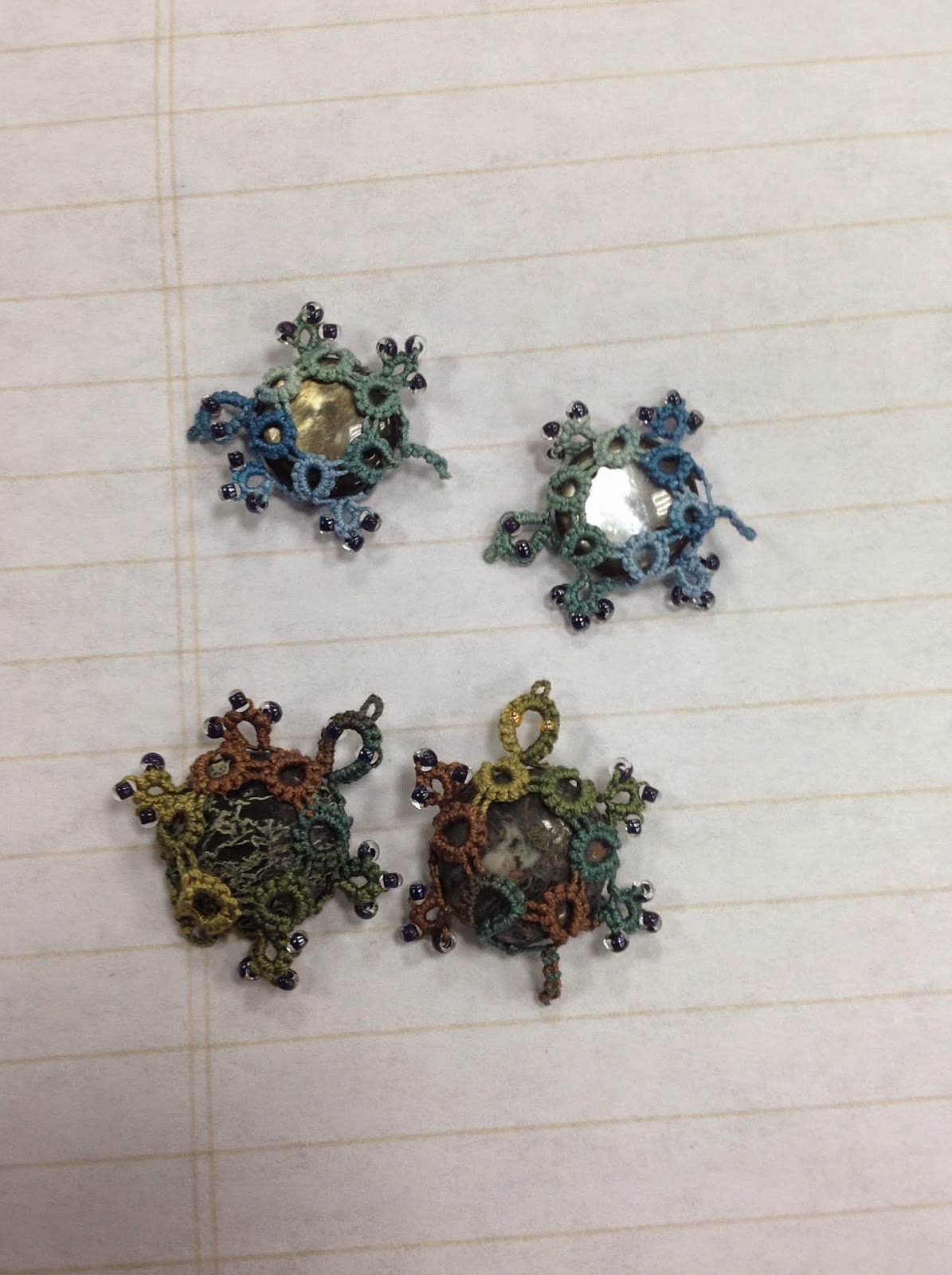 I finally opened my D&D 5th ed Player's Handbook (aka PHB). It's pretty with a lovely array of images. However, I have one minor caveat; the print used for the index is tiny. On the other hand, it's a good index. I have two greater caveats; no finished or at least partially completed time sheet and the references (as in Chapter 5) refer to chapters and not pages. I mean, great, the rules being referenced are in chapter 5, where in chapter 5? They have good character sheets available on line; including one that's fillable. That's a big plus in my book.

I saw one movie that I did not expect to like, Pitch Perfect. It turned out to be really good; a little predictable plot-wise but I loved the music. The other movie I was glad to catch in the theater; Guardians of the Galaxy. I really enjoyed it.