Thursday was my natal anniversary, aka birthday. I decided to take it as a vacation day. And since it was the Thursday before a holiday weekend, I took Friday off as well. This was a good plan.

Thursday, CD also took the day off and we just spent time together. We went out to lunch, played games, and just enjoyed each others' company.

Friday, I went to get my jewelry cleaned. This used to be a minor task. CD bought insurance on my jewelry when he bought it from a chain. I take it to get cleaned and inspected every 6 months and all repairs are free. Except. The two closest stores closed. On the bright side, the next closest store is in Greensboro.

After, I met part of my family for lunch. They picked a place close to where I was going to be and close to the highway, so I could make my way home again. It was a lovely. Dad and K gave me a bracelet he bought in Texas in 1977. It's turquoise and coral chip Kokopellis silver cuff bracelet. They also gave me a book about the Acoma people. They gave me a phenomenal photo of some Acoma pottery for Christmas.

CD gave me the soundtracks for the 1st two Hobbit movies and RG gave me Elle King's cd, and a book from my Amazon list.

Saturday was TriTatters. I managed to make one ice drop and got some sea glass from Carolyn. I started an ice drop with one of those but they are larger than my usual glass and I'm adjusting to fit. I don't think I've made it large enough.

It was a lovely meeting. I helped someone with a current project and showed her how to make Martha Ess's half-braid bracelet. She wants to make one for her daughter, to recognize her daughter's getting her prize job. The tatter, we'll call her R, is still learning and this is a pattern well within her skills. She was so thrilled. I love helping people like that.

Sunday was Pathfinder, Tears at Bitter Manor again. We haven't played since February and one of our players had to bow out (his wife is sick - I hope it's nothing serious, but he just wanted to be there for her). We played without him but we spent lots of time socializing and didn't get a lot of play in. We did get through 2 battles and I almost killed the barbarian. Concentrated fire is very bad. Of course, I targeted her because she was the most likely to survive.

Monday, a few of us got together and did some computer gaming in Lord of the Rings Online. It was lots of fun. We hadn't had a chance to play together in ages.

Today, a new staff person joined us at work. I finally have another woman in the office.

Posted by Sewicked at 8:47 PM No comments:

In the end, I didn't get the pictures until the weekend, so I decided to just post today.

I went to see mom for Mothers' Day. The day before was a bit stressful.

I went to get my car inspected while CD got the oil changed in his. Of course, both of us had stuff come up. Most of mine was recommended maintenance, not OH WOW GET IT DONE NOW, which is nice. I got some of it done. However, the stuff CD needed took a bit longer. So I said, I'd grab his stuff and take him to his Tai Chi class. Except, I somehow managed to bring the wrong bag. Instead, we went to lunch.

The dealer said his car was done so I took CD back. He could pay for the repairs, get his car, we could transfer his stuff to his car and make the afternoon class. Except 'ready now' meant still on the rack. By the time they got it down, etc, CD had missed that class, too. Quite a bummer.

I had to go shopping to get some stuff for mom. I had ordered a portable DVD player for her. I had to make sure I knew how it worked, get it charged, etc, so I could show her how to work it. I bought some of the other stuff on her list while I was out.

Mom loves her DVD player. It's not very big, but she watch her DVDs again and that's the important part. I'd found those half-dozen Last of the Summer Wine DVDs and she hadn't even seen them yet. I ask her if she remember how to use it when I call her and if necessary go over it with her. I specifically found one that's easy to use.

The Deadlands game on Thursday had one player missing. She and her husband were out of town. Since she plays our heavy hitter, we decided to avoid combat. The son of one of the other players came. He's a pretty good player.

I finished the tatting on a bracelet. And I've gotten past 2" on my stitch gauge for my mock cable wristlets. 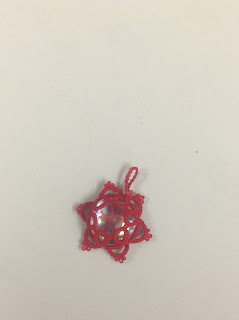 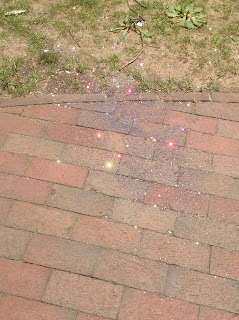 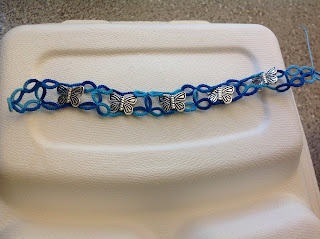 I am trying to download pictures from my iPad. Once I get that done, I'll post.
Posted by Sewicked at 9:57 PM No comments:

Email ThisBlogThis!Share to TwitterShare to FacebookShare to Pinterest
Labels: schedule

because my laptop is misbehaving and typing an entire post on my tablet would drive me nuts.
Posted by Sewicked at 10:31 PM No comments:

Autumn Breeze and I had our date night Tuesday and we decided what to do for our trip. She's been the recipient of some culls and purges recently so she wasn't looking for much. Still, it's a good idea to get an idea of trends, etc.

Thursday, the Deadlands GM revealed he thinks we're coming to the end of the game. He's not certain how many sessions, somewhere between 2 and 20. The question, what to play next? At this point, he's torn between Dresden Files and Blue Rose. Dresden Files is a Fate game and thanks to the Shadows of the Century game I ran, SR is familiar with it. Blue Rose is a new (to us) system, but it's romantic fantasy (think Mercedes Lackey or Diane Duane or Tamora Pearce).

Friday morning, I packed up my clothes, etc. I grabbed my sock loom and a skein of yarn, my Loom Knitting Primer, some tatting supplies, and some coloring pages (in case I had some time to do so). One of my friends called as I was packing and put me half hour behind. Autumn Breeze was running behind, too but we were on the road in a fairly timely manner.

We took secondary highways so it was a scenic trip. I was missing sleep so I took a nap part of the way. And I found out my yarn was the wrong size for the loom, so no knitting. The primer is really good though. Autumn Breeze had given me some red linen thread so I tatted a heart for her. She wants a bracelet from the same thread. 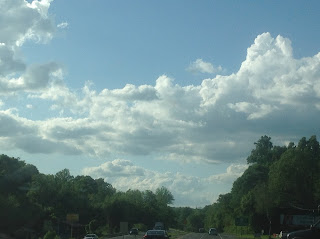 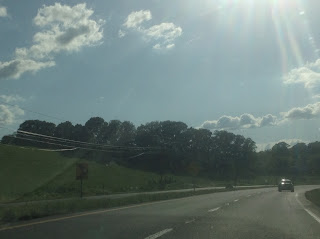 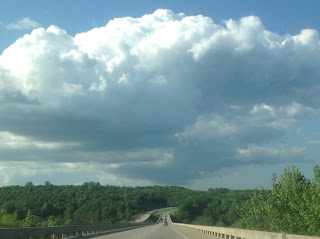 Saturday, we had breakfast at the hotel and then off to the festival. I had my Ravelry pin but didn't see any names I recognized. It's a big festival after all.
This is where we parked on Saturday. 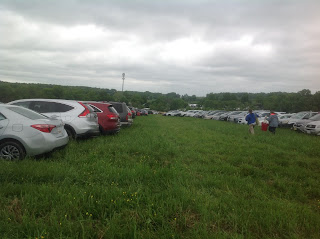 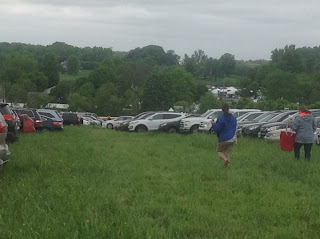 We were really close the drive/road farthest from the gate. 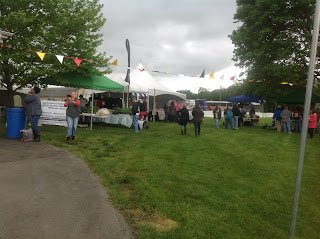 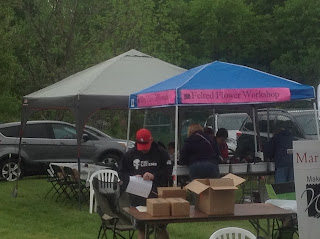 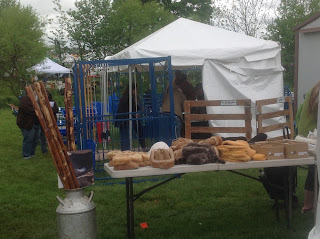 More scenes from the Festival There were so many lovely handknits, hand crochets, and woven garments. 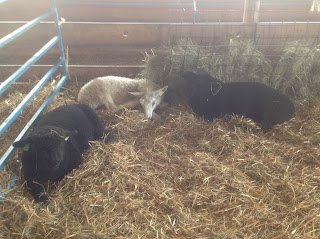 Here are a few purchases; the dk yarn (wool/cotton blend) to use with my sock loom.We ended up spending most of Saturday (in the cold and wet) at the auction. She bought 4 looms, and this is one is with a 2-liter bottle for size comparison. Mom said she wanted to buy something for me, so I got this tunic. 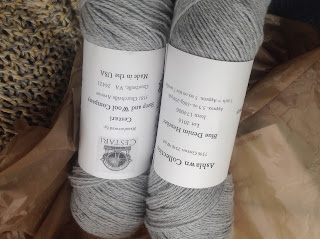 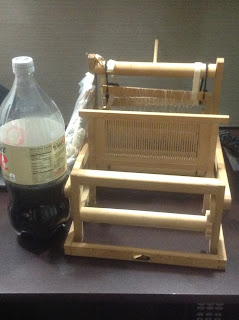 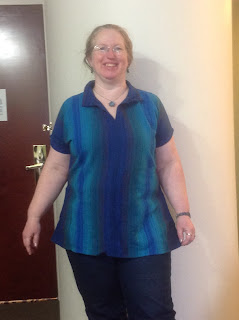 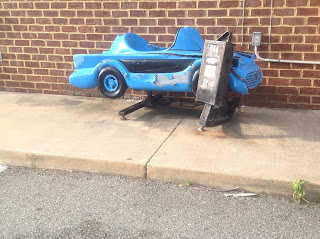 On the way we saw this car. I think it's been in an accident.

And today, this arrived. Yay! 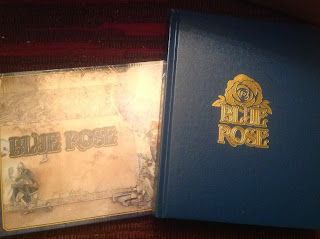 Yes, It was a very nasty cold

And I was pretty wiped out for the week. I'm still coughing occasionally and last week I had a lot of trouble sleeping. 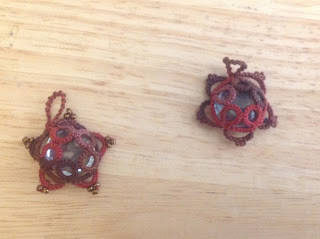 Here are both the ice drops in size 10 Spice Cake

There was a fire alarm at work, while I was at lunch. So I went to the stress relief snack time at the nearby store. I colored two pages. 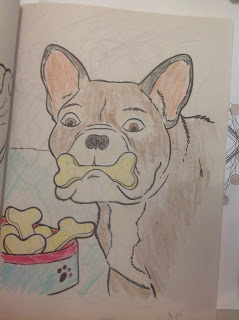 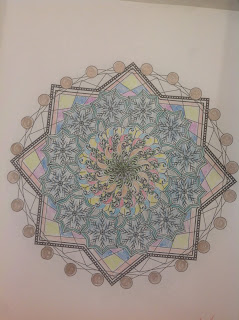 this broken root reminds me of something. If could just remember what. 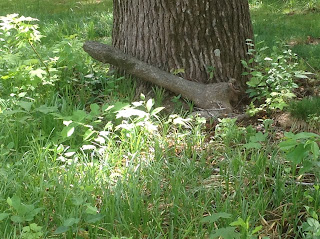 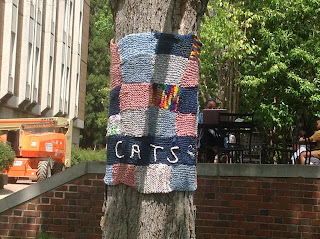 I'm in the Employee Forum again, for a one-year appointment. The next meeting is tomorrow. On Friday, I leave for Maryland Sheep and Wool Festival.

Mom and I had to sign some papers for stuff so I went to see her last Friday to get them done. Then we did some shopping and generally spent time together. I still can't get her DVD player to work.
Posted by Sewicked at 10:03 PM No comments: