I had a rocking time at Palmetto Tat Days! I made it to Anitra's house later than I had planned. My car key slipped off the key ring/fob and I spent half an hour or so looking for it. Chris finally found it just under my car on the passenger side.

I met Anitra's and Steve's new dog: Yoko. They have reason to believe that she had been abused in the past. Now they know something of the physical type of her abuser. She growled and barked at me whenever I was in sight; except for a few minutes when I was feeding her treats. She even snapped at me once. I just kept my distance from her, my presence obviously stressed her.

Anitra and I left early Thursday morning. I showed off my bracelet
I'd show you a picture if I could

That afternoon, as I looked for the bracelet, to show Martha, I couldn't find it. Anitra and I looked through my tatting gear, my bags, etc; even went through her car. There was no sign of it. I started a new bracelet with the thread that I had; variegated green with dark green beads.
(again, pictures won't load)
I found it Friday morning, with my jewelry. Bright side, I had one complete bracelet and one partial bracelet to show in class.

On the trip down, I finished my amulet bag. I just had to finish the neck cord; I put in a split ring to add a new thread when the thread on my shuttle ran out.

I took Erin H's onion ring guitar (there was more to the name, it was very Elvis, but I don't remember) class. I think I finally know how to do an onion ring. Yay me & Yay Erin. My guitar soundbox is rather floral rather than smoothly rounded.
(yep, still no picts)

I took Sharren M's Southern Star class. I was doing well and had almost finished one repeat when a knot unflipped and the Self-Closing Mock Ring was not so ring-like. I ended up retro-tatting. There's a floating ring so I'm not sure whether I should just start over. I had to put it aside to get some other projects done.

I did finish the thyme leaf pattern that was in our packets. I finished the green bracelet and started a bracelet from Martha's kit; navy blue with dark 'oil slick' beads.


The food was great, if not exactly low-cal. The scenery was lovely. The convention center was very close to the middle of nowhere, at least three times on the way there, Anitra & I thought that we might have missed the turn.
Posted by Sewicked at 9:03 AM No comments:

Tonight I finish packing and stay at my friend's house overnight. In the morning, at some excessively early hour, we will leave for Toccoa, Georgia. Why are we going to Toccoa, Georgia? That's where the Palmetto Tat Days is being held this year. It's a longer drive so we have to leave earlier.

Last night, I started preparing. I loaded my shuttles for the two classes that I'm taking (I'm not worried about the two classes with which I am assisting) and one for the Friday night activities. I didn't get enough of my clothes packing done. I got the shirts, etc set aside, but my jeans weren't ready.

Last Sunday's game didn't really happen. Our home Forgotten Realms D&D campaign is going strong but one of the players hurt himself late Saturday and couldn't make it at the last minute. Since his character's nickname is 'Rail Gun' the GM had upgraded the combats to match. Frankly, the rest of our characters wouldn't survive them without him. Our tele-player (thank you Skype & um, whatever our on-line mapper is, I can't believe that I've forgotten the name) took off to get some errands done. The other player stuck around while C, R & I worked on Dresden Files characters. Yes, I play multiple role playing game systems. Don't get me wrong, I love my D&D (although 4th e will never be my best love), but I also enjoy other systems & settings.

They've almost finished our deck, only a few flourishes remain. Now if they'd finish replacing the damaged boards on the walls, I'd be even happier.

We got some much needed rain yesterday. And Hurricane Danielle is far out to the Atlantic and is not predicted to hit North America (not before Monday anyway) so it won't interfere with this weekend's plans.
Posted by Sewicked at 11:55 AM 4 comments:

We started creating/rolling our Traveller characters last night. With the Mongoose edition, you no longer run the risk of your character dying during the generational process, although mine did end up badly scarred. We were running late so the 'how our characters know each other' stuff is going to be handled over email. Ri & T are going to Dragoncon so we won't be playing in 2 weeks, instead we'll play in 3 weeks.

Mom's birthday was Saturday. I finally bought her present on Friday. I bought uniforms and school supplies for two girls in Afghanistan. Mom really likes that sort of gift; it doesn't add to her 'stuff' quotient. We had a nice visit. We hit the thrift shops and I found four pairs of pants for work. Of course, I forgot them at her house. *sigh*

I'm going to Palmetto Tat Days next weekend. I'm so excited. Plus, they asked me to be a teacher's assistant for a couple of the classes that I'm taking. More excitement. I've done the bracelet & it turned out fabulous (link is to a picture on flickr). I'm not as happy with the pendant that I made, but only because of poor color choice.

Here's a dragonfly that I spotted yesterday.


Oh, want to see some turn of the (19th) century pictures of Russia, in color? Go here.
Posted by Sewicked at 6:31 PM No comments:

Because I've had a hard time loading them. I finally got the camera to work and to find the reader, now I can't get them to the blog; or anywhere else. 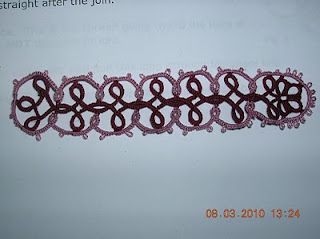 Here's the bookmark that I made for the literacy program at work. The pattern is by Karey Solomon, from an old Tatting Times. The thread is DMC size 12.

The bracelet that I made for my namesake. I bought a little bracelet with plastic beads for $1. I still have a few flowers left, but the rest of the round beads. The thread is perle 5, by Star. The pattern is my own, using Jane E's beaded picot method. 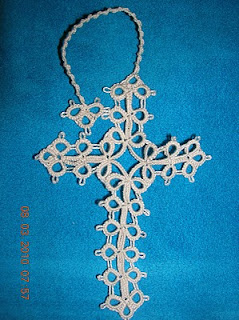 Bookmark, from DMC Book of Needlework. I made a slight error, the center chains are supposed to be twice as long and join in the center. I like it better this way. DMC size 12 perle. 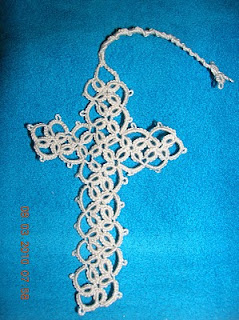 12 Pounds Down and Tatting

Okay, so maybe I'm bragging a little, but it's really nice to see my clothes fitting again. Except today's skirt. For some reason, the back zipper makes an 's' shape, like I have a tail stub poking my skirt.

I would post pictures, as I finally got my camera to work again. Except, I can't find my memory card reader.

Tatting:
Finished a bracelet for Namesake, but I think it's too small. It's blue perle 5 cotton with plastic flower beads.

I guess it will be a doll's bracelet. I made two DMC perle 12 ecru cross bookmarks, for a WWII vet and his companion (he's in his 80's, after all). The vet is a Navajo Codetalker and he's coming to talk at the Marine Corps League National meeting next week. I made a bookmark for UNC's adult literacy program (burgundy & mauve DMC perle 12).

Gaming:
I almost finished Spirit of the Century. I really like it. I want to run a session at Mace. Other game books that I've picked up: the second edition of Ironclaw, Dresden Files, Swashbucklers of the 7 Skies, and a gaming aid Eureka: 501 Adventure Plots to Inspire Game Masters.I want to run a game of Ironclaw, too but I haven't figure out which edition.
Posted by Sewicked at 8:08 PM No comments: