Hope everyone had a very merry Christmas. I drove down to see my Dad, stepmom, et al. The presents were well-received. The weather was nice and traffic was not too bad.

I finished a bracelet (the silver and black beads one). I've started another one using hand-dyed thread. It's only the 2nd time I've used hand-dyed thread. This one is shades of black and brown and I'm using silver/clear beads. 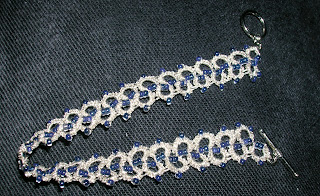 My dad and stepmom came to meet me for lunch at work. That was really nice. I've been here for 10 years and it's only the 2nd time Dad has even seen the building. It's the first time either one had seen my office. Only 1 of my co-workers was in the office at the time.

Short post today.
Posted by Sewicked at 4:25 PM No comments:

Happy Hanukkah. Happy Solstice. Three days until Christmas and it's a warm, scattered wet, day. Yesterday, my coworkers distributed Christmas present. One made homemade chocolate chip cookies with her son. Yum, delicious. One gave me a s'more kit (chocolate, graham cracker & marshmallow). Another gave me chocolate crème wafers, plus chocolate and fuzzy socks from another coworker. I need to take a bag to work to help me carry the stuff home.
Our office holiday party was Monday. This was the sculpture on the dessert table, yest it's made of chocolate. 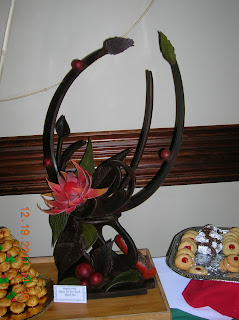 I took part in a Secret Santa online. My present has arrived but I haven't opened it yet (that's for Friday) but the sender accidentally said something about the contents in the gift tag. Oops.
Here's an interesting essay/list about body image, for fat women. It's very healthy.
Here are some reasons for a man to look for a woman who reads.
Did you hear about what's been happening at K-Marts (and a few other stores with layaway) around the country? People have been paying off the layaway for random strangers, people who had laid away children's items mostly. The store might call Mrs. Jones to tell her that her $250 balance (which she wasn't certain she was going to be able to pay off to get her children toys or clothes for Christmas) is now $20 because someone anonymous paid off most of it. One woman hung around the layaway desk and registers and paid for items telling people 'remember Ben', presumably her late husband.
Some troops came home from Iraq last night. They showed a clip on this morning's local news show.
I finished another bracelet last night after work and started another one. The one I finished is the burgundy and black one I mentioned in my last blog. I'm using the same beads with silver thread. The metallic thread is a little more difficult to work with but it looks really good. It's also smaller, so it may take more thread/beads to cover the same distance. 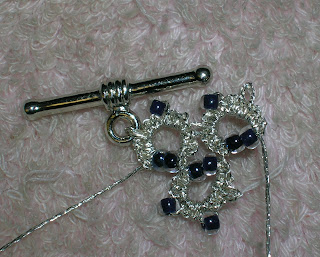 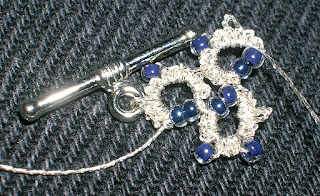 I'm tempted to try and make a hat for my niece but I have 4 days to do it. I might be better trying to make her another bracelet this year in her school colors but in gold metallic thread with black beads.
Dad's present still hasn't arrived. I'm getting a little worried.
Here's are a couple sunrise pictures 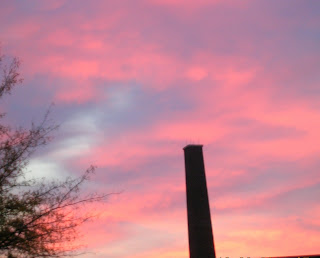 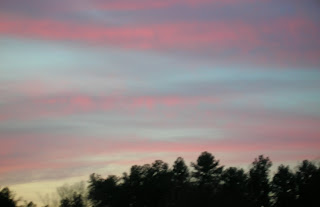 Posted by Sewicked at 7:56 AM No comments:

Tuesday was the big winter blood drive where I work. I stopped by my office, took care of a couple brush fires, went and donated blood, came back, ate at my desk while I worked, then back to the blood drive to volunteer. I was a donor escort; escorting folks from their chairs to the canteen. They were a little short of volunteers so I had 3 pods (7 chairs with a central equipment table) to handle. Up to 4 people might finish at the same time. I missed escorting a few. I did have one near faint. She got a little dizzy as we neared the canteen but the Red Cross worker and I, helped by a 3rd person I never did identify, eased her to the floor. She didn't ever lose consciousness, I think, but she definitely needed more recovery than most. Another person I was supposed to escort got dizzy while in the canteen, at about the same time. Whee!

Here's a bracelet I finished this week. I have no idea what to name it. Any suggestions?

Here's the one I'm currently working on, I needed a break from pastels. I enjoy them, but not a steady diet. 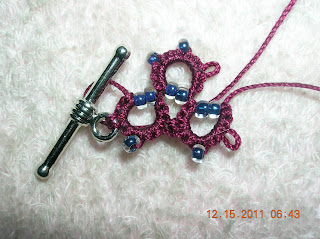 I don't know what to call this one, either.

My brother finally gave me my niece's list. She is definitely more her mother's daughter.

I took part in an online Secret Santa. I mailed out mine today. According the organize, the one I'm getting might arrive today.

I have mom's present (henna for hair and I'm going to help her apply it this weekend). Dad's present has shipped. I have my brother's present, my sister-in-law's present, and maybe my step-mom's present. That still leaves a list of people I need to get presents for. Some presents I'm splitting with other people. I have at least one new person on my list; one of my oldest friends has gotten engaged. We'll be meeting her at New Years.

I'm sure I have other things to share but it's late and I want to head home.
Posted by Sewicked at 5:20 PM No comments:

And by that, I mean I've gone to my first Christmas party. It was supposed to be my second one but I got sick and didn't go to the first one. I gave Chris the latest Edge book by Ilona Andrews. He had just learned it was out and hadn't gotten a copy yet. I still have his other present but I haven't wrapped it yet.

This one was mostly getting together with friends, playing games, eating supper and then opening presents. It was very low key. My SO bought three books from my wish list while one of my friends found the perfect journal for me to use as a character journal for an upcoming game.

I made some serious progress on my sock. I have about another half inch before I start on the heel. Again.

I am waiting for my brother to call or email me. I have a questions for him. Shopping for my niece is getting harder and harder. She's 16 now and very different from me or my brother, in many ways. She has her own interests, which is as it should be. She should not be a clone. But it was so much easier to shop for her when she was 6. 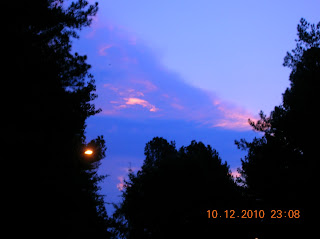 Posted by Sewicked at 4:12 PM No comments:

I've been making a few bracelets. Not a lot, because I've been distracted, but a couple. Here's Pearly Girl (thanks to the nice lady who named it for me). 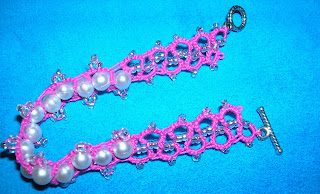 I've started one in pale pink with purple beads. 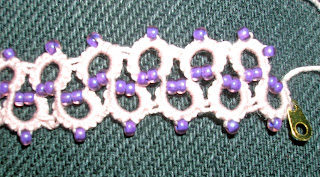 I've taken some sky/cloud pictures and some flower pictures.

I've made a Blue Rose character (not that I expect to play her any time in the near future, but I can wish, right?). I'm reading Wu Xing: The Ninja Crusades, with the intention of reviewing it. I bought the new game The One Ring, set 5 years after the events in The Hobbit (by J.R.R. Tolkien if you've been living under a rock or not from an English speaking country).
Saw both parents at Thanksgiving (no, this is not typical and hasn't been since they separated when I was 6). Dad came by for lunch on Thanksgiving Day; thank you, K&W for being open so I didn't have to cook. I at supper with the SO's parents. I was supposed to donate platelets on Friday but I got a migraine; and aspirin means no platelet donation. I went to Mom's for the weekend. We went to only 2 stores; an AC Moore & a thrift shop. I did pick up some new audiobooks.
I found out the cassette tape iPod accessory in my car doesn't work so well anymore. All that noise was not coming from my car stereo, after all. My car stereo is old enough to be in college, so I wasn't surprised when the noise quality declined. Except, those pops and static were from the cassette hooked up to my iPod. I've been listening to some audiobooks instead.
I took part in NaNoWriMo. I wasn't expecting to hit the 50,000 words, I just wanted to finish my short story. And I did. I'm going to wait until the new year to look at it again and start the editing process but I have a beginning, a middle and an end. The end desperately needs work, but it's there.
I've started reading Nalini Singh's Psy-Changeling series. Bluntly, the blurb for the first book turned me off. But I've enjoyed her Guild Hunter series so much, I decided to give her other series a try. I've read the 1st two books now and I'm looking for the 3rd.
I just read a book by a new (to me) author, Jessica Sims. Or is it Jennifer? Anyway, the book title is Beauty Dates the Beast. It's an entertaining book and I'm looking forward to the next one.
I figured out what to get my mom for Christmas. I found a really good source for hair henna. Unlike what she used to use, this stuff won't turn her white hair to neon orange.
I'm still working on what to get Dad. He might get a stove or something for a reservation resident. I'll have to look. I think he might like a charity gift this year. I saw a book I thought he'd like. I was right, too bad someone already loaned him a copy.
I have an idea for my brother (he was the 1st one I figured, I just need to order it). But I'm at a loss for my sister-in-law. My niece will be getting a new pair of earbuds and maybe a bracelet made to order. If I find an interesting cd, she might get that, too. Maybe.
I have a couple things for the SO already. But there's still quite a few people I'd like to get something for them. I need to pull out my list and make decisions.
The VCR died. Or maybe just the tape that's in it did. The tape is kind of hanging from the VCR, like a cat holding a mouse by its tail. There went my copy of Strictly Ballroom.
Last night I went to a presentation about Chang and Eng Bunker. Do you know who they were? They were the original Siamese twins. They took a physical drawback, and it was severe (the King of Siam almost had them beheaded for being a 2-headed Chinese demon) and became businessmen. They were sharp, too. They were successful enough to buy a good tobacco farm in North Carolina. They married and had full lives. They were articulate and made sure all their kids had a good education.
WARNING: Politics Ahead
This is a speech before the Iowan Congress