websites and my doily

Here's instructions for a little plush skull; great if you celebrate Dia de los Muertos. Or even if you just wish that you did.

And now you know why cannonballs are dangerous, especially when dredged up from the sea. 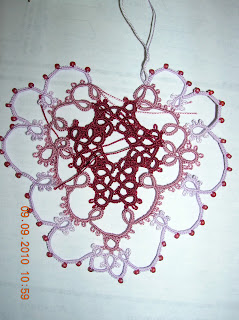 Here's the unblocked, untrimmed heart doily; my entry for this year's State Fair. I still haven't found a presentation for it that I like.

I finished tatting a 2-color cross bookmark for my family reunion. But then I got a migraine right before leaving and didn't go.

I'm working on a burgundy cross bookmark; still Tatmom03's pattern, still perle 12. I'm using the thread from my doily. The 2-color uses the 2 outer colors from the doily; but no beads. As soon as I get my camera downloaded, I'll add those photos, too.
Posted by Sewicked at 2:22 PM No comments:

Do you sometimes feel awkward about people in wheelchairs or with service animals? Here's a serious, albeit sarcastic, etiquette guide.

Time to hit the local farmer's market this weekend. They're gathering food for the local food banks.


I'm still looking for a frame/mat/something to display my heart doily. So far, no luck. I have Saturday, and that's about it. Cross your fingers that I'll find something suitable. Next weekend I'll be busy (no time for craft/etc shopping) and weekend after that the birthday and; State Fair preparations start (and oh, the entry is DUE).

I'm almost finished the cross bookmark that I'm taking to the family reunion on Sunday. There are door prizes and I try to tat something every time that I go. I will be the only representative of my granddaddy's line who'll be there (unless one of my cousins surprises me). My mom is with her older sisters celebrating the 80th birthday of the younger one this weekend. Of course, those cousins will be at their mom's party. My other cousins are out of state.

I volunteered a snowflake for a charity auction. I need to finish that, too. I swear, I didn't think about the deadlines or over extending myself.

The Dresden Files games were so much fun. We entertained ourselves, the Storyteller (or whatever the GM is called in that game) and the other players. There were 2 tables and the players mixed up some, so we didn't play with the same people all three games. In one game, our (C, R & I) sailors made friends with another PC who was very, very rich. He had an aspect (game-relevant descriptor) about 'wants to believe, but doesn't'. It was our PCs who 'broke' that aspect. I don't remember what we did, but I think it was when C's character put a glamour up to hide us as we broke into a house (to look for clues, nothing nefarious). Suddenly, Wayne (the character) couldn't see the other characters. Player sighed, picked up an eraser & started erasing and re-writing. Anyway, while riding in his limo, we suggested that he get a cannon. In the next game (though he was at a different table), he did! Our characters have a small cannon, complete with stone shot. No powder, though.

Oh, our characters? They're all sailors from the Flying Dutchman, stranded on shore leave. My character is the oldest; she's 250+. Yes, she remembers the political upheaval of the 1770's. I could go on, but there's a reason 'No, I don't want to hear about your character' is such a popular button.

I volunteered to run 3 games at Mace. I'm running one Ironclaw (either 1st or 2nd ed), 1 Spirit of the Century and 1 Pathfinder Society. But I'm being mightily tempted to run a 4th game; Hellcats & Hockeysticks. I blame the game's author.
Posted by Sewicked at 12:15 PM No comments: