Thursday night we had a serious thunderstorm, complete with thunder, lightning, and hail. It shredded leaves and broke some branches but I didn't see anything more serious.

CD and I did some final work on the dryer hose. We didn't need to pull out the dryer (thank goodness), I could sit on it and pull up the new hose over the old one until it was straighter. I finally got some laundry done.

Unfortunately, I misplaced (not lost) my wallet on Saturday so that was the only useful thing I did.

I still need to check for used iPads. I want to check the local places before I check eBay. I'm tired of not being able to take pictures.

At least yesterday the high was only in the 80s and the humidity was quite lower. I sat outside for lunch on Monday and it was nice, most of the time. Too bad it won't last.

I've done the tatting for another bracelet. I think the beads are small malachite spheres and these green seed beads with a hint of blue. The thread is Vineyard Harvest (I think).

I resolved my edging issue. I cut open the ring, tied a knot and kept going. I think I have close to a yard made now.

BTW, at this point, most home doors do not simply open when you walk up to them. You have to use your key to unlock them. This brought to you by high humidity, high temperatures, and a stress-filled day.
Posted by Sewicked at 6:55 PM No comments:

Sorry, I forgot to write and post my blog post on Tuesday. I remembered two days later. To be fair, I woke up Monday with a horrible migraine. I took some painkillers, they didn't work so I called in sick. I took some more painkillers and slept away the worst of my migraine. I finally felt up to having a light on about mid-afternoon. I didn't turn on the tv until about 6 or 7 pm, I just couldn't stand the light or noise until then.

Our new hot water heater was installed last week. It took about 5 hours. I immediately hurried to work and just missed the bus. Since I had an hour before the next one would arrive, I dropped off some things (the stuff from last Tuesday) at Goodwill. Of course, the next bus was late.

Saturday was supposed to be another session of Wardens of the Reborn Forge, but one of the players was out and another player had guests. The other player brought his guests and rather than have them sit around, potentially bored, CD ran We Be Goblins, Too instead.

Sunday, the Triangle Tatters met. There were 14 of us at the meeting. I showed a couple people something about tatting with beads and my bead spinner. I loaded some beads for another bracelet. L (of Something Under the Bed fame) brought a selection of her books and I found one I really want. It has bracelet patterns.

I decided I didn't really like the iPad Air, I wanted a regular iPad. Of course, I didn't find out the Apple store didn't actually have any, in stock or online, until after I'd returned the Air. I'm not happy about that. I guess I'll try Edward McKay, etc to find one. In the meantime, I have no camera or camera-like object, unless I pull out my 35mm. And I have no ebooks, except on my laptop.

I've gotten quite a bit done on my edging; it's more than 24" long now. But I made a mistake and I'm trying to open a ring and it's being stubborn.

The heat is supposed to break soon. I'm sick and tired of the head after ~2 weeks of heat indexes around 100F.

Posted by Sewicked at 6:48 PM No comments:

Went to see Mom this weekend. We went to Mayberry's again. They have such good hot dogs and such good ice cream.

As I was getting out of my car, I fumbled and dropped my iPad. The screen cracked so badly there were a couple glass fragments caught in the case cover. I had to replace. Considering the 90-day warranty on a replacement or getting a 2-year warranty on a brand new one...I bought an iPad Air. It's lighter, which is nice. But none of my cases fit. And I'm going through set up pains again. Thank goodness for restore from backup.

Our hot water heater's gone out. I've been taking cold showers, quickly. Cold showers are nice in the summer, but not first thing in the morning. I definitely don't like to wash my hair in cold water. I was going to work late today, so I could be here for the replacement. But we've been stashing stuff in the basement and there wasn't room to wheel a new hot water heater into place. C and I spent most of the day going through stuff. It's something I've been meaning to do so for some time, but not all at once.

Tomorrow the guy arrives to take away the old one and install the new one. And I will go take a hot shower and wash my hair. Thank goodness my boss understands and I had nothing urgent to do at work. 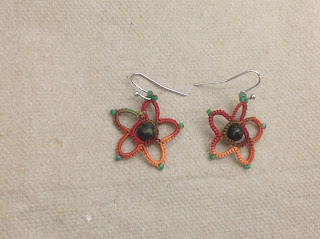 These are the earrings I made at the demo at Mordecai House. The spheres are serpentine beads. I can't remember the thread name. 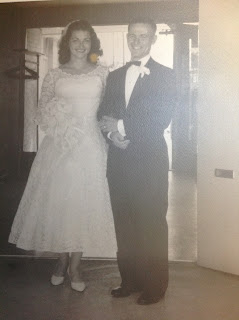 A Brief Flash of Spring

A couple days this past week had me wearing long sleeves and thinking about jackets. Then summer resumed.

Triangle Tatters did a demo at Mordecai House. We were in the Visitor Center and a few people came in to talk to us, watch us tat, and see what we had displayed. Katie brought out the quilt. It really is a magnificent piece.

I've finished sewing the edging onto one end of my scarf/shawl. It only took two tries to get it right. I started the edging for the other end. I also worked on the same bracelet, but the beads were all wrong. I finally made a pair of earring using the serpentine spheres and seed beads. Then I started a bracelet using just the seed beads, although I'm going to try to use one of the serpentine beads for a toggle catch.I'm contemplating a pendant to match. Maybe another State Fair entry? 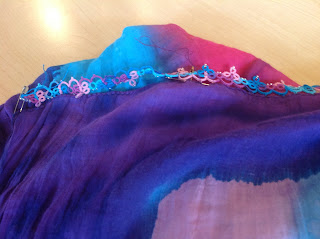 The salvage guy never contacted me about my Saturn. I thought he was going to be faster. Since he's not, I've contacted PBS about donating my car. Hopefully, it will all be over by the end of the week.

Sunday, CD and I went looking for milkshakes. It's surprisingly hard to find an ice cream parlor or other place I knew had good milkshakes. There are no more Swenson's around here, and no Mayberry's nearby. Turns out, CookOut has pretty good milkshakes and we passed one while driving around.

A week since my birthday and I'm getting used to saying I'm 47 years old. Of course, by the time I'm really used to it, I'll be 48. And I still have birthday cake (from the cake my coworkers got me on Tuesday).

Friday, I took the day off to meet my dad for 'lunch.' We met at 9:30 and had breakfast. Then we kept talking until we went to lunch. He had found some old negatives from when he and Mom got married. There were pictures of the first house they rented after they got married and pictures of Aunt Carole and Uncle Dick, and cousin Beth, and Grandma and Grandpa. There was also this wedding portrait.

Dad also gave me my birthday present. I now have a gift card to Michael's. Bwahahaha.


I 'found' the empty light on the gas gauge of my new Honda. Now I know when to expect it.

I spent over an hour Saturday morning looking for my phone. I left it on the charger on Friday and took it off when I got home. I thought I slipped it into my purse, but when I looked I couldn't find it. I checked other possible locales, then looked through my purse again, repeat a couple more times. I took a break to see if thinking of other things would bring it to mind. Emptied my purse and looked through it again. Finally went 'duh, use the landline and call my phone.' Listen, listen, hang up, call again, and yes, it was in my purse. It had been concealed by a fold of fabric in a pocket.

The actual drive didn't go much better. I missed my exit but that's no big deal, I just took the next one. It's been awhile since I took that one and I missed the turn that would quickly put me on the road I wanted. FYI, the road I was on is a curved, winding 2-lane 45mph road, often with trees or farms on either side. I noticed an oddity for the area, a trio of bicyclists. You never saw them on this road while I was growing up.

I was careful and went by them. Then I passed another one. Then two more. Then three more, and another one. Then a quartet, and a single. After the 1st two groups, I was thinking bike tour. By the time, I'd passed a dozen, I'm thinking, bike race of some kind. Especially as I saw of quintet of bikers ahead. I gave up and turned off.

I proceeded to get thoroughly lost. My hometown was laid out logically, once up on a time. Now? Not so much. At one point, I ended up on a highway; what I thought was a right turn was an on-ramp. When I hit downtown and saw another trio of bikers, I gave up and called my mom for help. She gave me some direction and I finally made it, in time for us to go to lunch.

I worked on this post Tuesday night, but something went wrong and nothing saved after this point and I've had to rewrite it. Oh well.

Mom and I had a nice visit. We took some things to a church who is active in helping those people in economically distressed areas. The next day we hit the thrift shops so I could find another pair of jeans and maybe a couple more pairs of pants to wear to work. I also found a fabulous toy gun that is begging to be transformed into something steampunk.

I mailed some snowflakes to Palmetto Tat Guild, to be part of their fundraising for the Tat Days scholarships they offer. 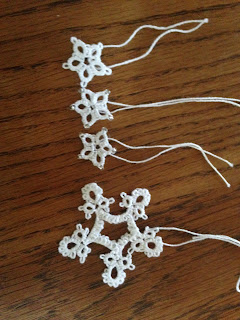 I left the threads in case they were needed for hangers. The snowflakes are from Kaye Judt's Oh My Stars book.

Tuesday night, I had a nice date with CC. We had supper and conversation. We've gotten to know the waitress and when she's not busy, we include her in the conversation.

Afterward, I started sewing the edging onto one end of the scarf/shawl. It's about half an inch too long. I have since removed the edging and I will attempt to ease it to fit. If wait until the last, like I did last night, it bunches awkwardly.

Posted by Sewicked at 5:36 PM No comments: