Sunday, I had Christmas lunch with C's family and R. Monday, C and I drove to my Dad's house and from there we went to my brother's house. I spent Saturday and Sunday morning wrapping while C cooked. I ran out of gift bags and ran to the dollar store to buy some more, and some wrapping tissue.

Oh, there's a 5-disc collection of 20 hours of African-American films, mostly dating from the 1920s and 30s. Here's an interview about it.

Here's a picture of the scarf I made for C's nephew. He loves it. He's even happier that it's machine-washable (Yay, acrylic). I did recommend he use a mesh bag so it doesn't get tangled up in the rest of the laundry. On his behalf, C asked me to make a matching neck gaiter. Glad I got that 3rd skein. 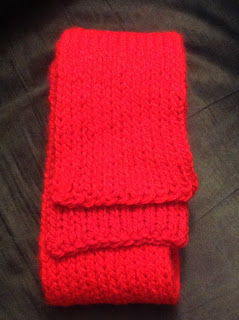 Here's the start of the neck gaiter I made for my brother, but I neglected to take a picture of the finished project. I've asked him to send me one. I did not sew on the buttons, since I wanted to fit it. I just left the buttons on the card and 'buttoned' it, after sewing around the buttonholes to stabilize them. 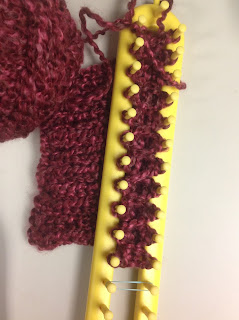 I made a lucky penny for my niece, too, but I neglected to get a photo of it. I also gave my SIL's sister and brother-in-law a snowflake I made. I thought I had a picture of it, but I don't. My niece likes her fuzzy fleece blanket and pottery state magnet with crystalline glaze. However, I forgot her calendar. Her fiance likes the corvette calendar C found. So that's good. Dad likes his military history calendar and we had a good laugh over the bobeches I gave K. I still haven't found the red necklace I bought for her. We told the story about her 2 bobeches from last year and 'oh no, her display has five candles.' Then she revealed she set out votives this year, about a dozen of them. Maybe I should make some votive candle frills next year. Bwahahaha. 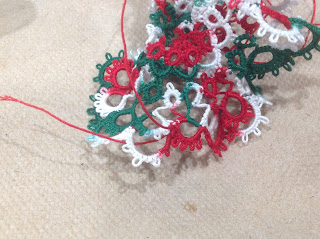 I made my first ice drop. And the thread (vintage) broke as I was closing the last ring. 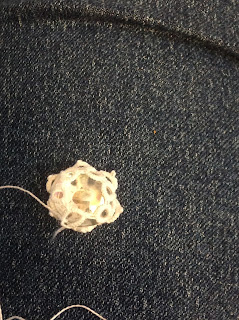 I've made one with green and white thread but I haven't taken a picture yet.

I have more wrapping to do. If anyone is interested, I'll talk about the presents I've received.

Places to Give for Christmas

If the news from Aleppo makes you weep and wonder what you can do, this link has links to groups working to alleviate suffering in the area (including Doctors Without Borders). Or you can give to the Red Cross. They can always use money and/or blood.  Maybe you'd like to do something for people in the US armed forces? Operation Gratitude sends care packages. Greater Good has Gifts That Give More, as well as 'click to donate' where sponsors give money to the charity for every click of the button.

Work has been slow. Slow enough that I've had old 1930s and '40s mystery/crime movies on YouTube. I watch them between phone calls and visitors. Some of them are pretty good (one had George Reeves as a train robber) and some are...okay. Some I skip because just...really? No. Some characters I just want to thump in the forehead until they're smarter.

I finished the lucky penny for my departing assistant.

And I'm making progress on my target of 90 hearts for the NC Regional Lace Day (for the goodie bags).

My idea for my brother's present fell through. And he's never told me if he likes the consumables I've gotten for him (beard stuff and Badger Balm anti-bug balm, etc). I'm having to think of something else. Quick. C found a corvette calendar for my niece's boyfriend. I was tatting a snowflake for my SIL's sister & BIL but the the thread broke. Do I tie and continue or start over. I was on the last round of a 3-round snowflake.

Posted by Sewicked at 7:11 PM No comments:

My SO's (significant other) oldest nephew has joined the Peace Corps and he'll be leaving the country next year. He speaks Russian, so he'll probably go to Eastern Europe, somewhere. It's a teensy bit colder there than it is here, or so I've heard. Said nephew also neglected to send a Christmas wish list, so my SO got the bright idea to give him a scarf. But not just any scarf, a long, thick, handknitted scarf, by yours truly. On Saturday, I went to the craft store and bought some acrylic yarn. I have no idea how well the young man handles laundry and I thought it best not to take chances.

I pulled out one of my Knifty Knitter looms and got started that evening. After I finished prepping for the game I was running on Saturday. The part of the adventure is a bit open, so I got them to make some kind of decision so I only had to prep about 3 encounters. I had already pulled the figures I wanted and just needed to find a good map and review who and what they'd meet. I looked up any rules I didn't already have memorized and took some notes as reminders for those I'm a trifle shaky on.


We were playing on Sunday, so we started a trifle later than usual. And our host found out, just before I arrived, that he had to be on a conference call mid-afternoon. Ah well. The game is also our excuse to gather and socialize, so the interruption was more annoying than tragic. During the game, they were fortunate with their saving throws (3 of them used their once per session re-rolls) and got through it okay. Only one person got badly injured although I think everyone took some damage at some point.

One character was about to be swallowed and in desperation he pulled out a vial of sleep poison. I told him to make a melee attack and if he succeeded he got it down the thing's gullet. He succeeded, so I made the saving throw for the creature. It needed a 4 or greater on d20 to ignore the poison. I rolled a 3. It fell asleep. That was the last encounter of the session and it made a good stopping point. It was the encounter where someone took the most damage.

We went out to eat barbecue afterwards. We wrapped up early enough to go out, even with the 10-year-old. We will get to play Mermaid Adventures with her again. Her father got sick and that canceled the last game.

I knitted while the one player was on his conference call and a bit before the game. I made some decent progress. Stockinette works up very fast.

I did some knitting at lunch yesterday, some last night, some this morning, some at lunch today and have almost 30 inches. My SO thought 5 feet would a good scarf length. I also used up one of the skeins of yarn. I made my 1st Russian join. (the link goes to a how-to video)

If you like tabletop and/or LARP games and know someone else who does, you can buy yourself and that other person a present, thanks to Epimas gifts. You purchase a game bundle (each one has a different set of games) and you get to download the PDFs now. On December 24th, your friend gets an email with download information.

The big winter blood drive was at work today, from 7:30 am - 1 pm. I went as soon as my desk coverage arrived, at 12:30 pm. Alas, they'd had technical difficulties and scheduled blood donors could expect a 2-hour wait. They weren't taking walk-ins at all. I guess I'll make an appointment at the local Red Cross then.

The weather has yo-yoed from warm, to really cold, to quite chill, to almost warm and by the end of the week it's supposed to hit 'quite cold' again. At least, it will be dry. The quite chill and almost warm were a trifle damp as the incoming warm front dumped its moisture, and gave me a migraine.

Here's a picture of my niece's lucky penny. I think it's too tight, so I cut that off and I'm going to do it again. I might also do one for my assistant who is leaving and her fiance. I just need to find pennies from the correct years.
I also signed up for a Secret Santa thing on-line. I got my 1st (maybe only) present. Look! 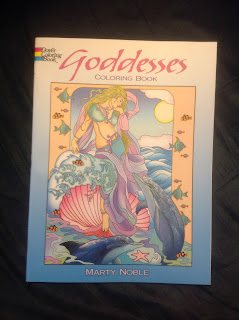 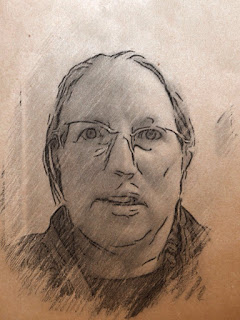 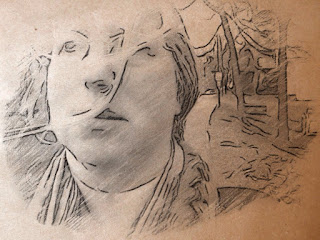 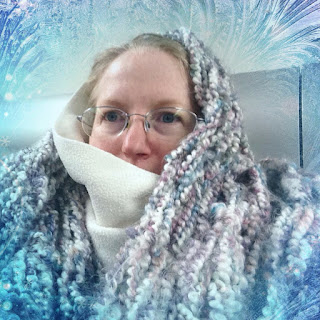 Maybe it's the season, but I've been looking at clothing websites. There's the legging shop I mentioned in the last post (I ordered a pair from their sample shop to try them). There's also this one, which makes the clothes to measure, when you order them.

Then there's these undersleeves. I really want the jersey ones, the lace ones, and the bell lace ones; in black and ivory, maybe in white. I have at least 2 or 3 sleeveless shirt, a couple cap-sleeves shirts, and one or two dresses that these will work with.

I am working on pendant for my niece (she doesn't read my blog, so it's safe to talk about it). I'm tatting a bezel for a penny minted the year she was born. I have a moleskine 2017 planner for her, too. I'm using Diane's icy drops pattern.

I went to see Mom this past Sunday. It was not a good weather day and the drive back was horrendous. But we went to a used bookstore to get her a new dictionary. Her current one was pitiful; thin and large print. We got her a good one and a couple other books beside. I also delivered her jade plant. I'm still looking for a small aloe plant.

I wrote and mailed my Christmas cards. I don't think I got everyone but it was a good 1st batch. I got all my aunts, my one uncle, my Dad and stepmom, and responded to one card. I have finished much of my shopping. I just have a few things yet to pick up. Either that, or I've forgotten whole swathes of people.

I don't have any new pics to show, sorry. I have pictures of a couple tatting books I want and a business card for a place that might carry tatting supplies in the area. But I'm not sure anyone would find that of great interest.