Did you have a good ritual turkey day? I did. It was pretty quiet, ending with supper at my SO's parents' house. I spent Friday and Saturday playing Pathfinder games with friends. Well, Friday I ran a game and Saturday I played. Both games were sanctioned modules. For those of you not up on shared world RPG campaigns, that means they are published adventures that the game coordinators allow to count as part of the campaign.

And if you understood none of that. Don't worry, you don't have to. Just accept they were really long games.

I've been tatting a bracelet or two. And I made some butterflies for a co-worker (distantly) who is going into the hospital. Next to last time I saw her, she requested some for her hospital room but she didn't say how many. I tatted a shuttle plus worth and gave them to her the last time I saw her. I don't think she was expecting the number I handed her.

Oh, and I finished the hanky for my friend. 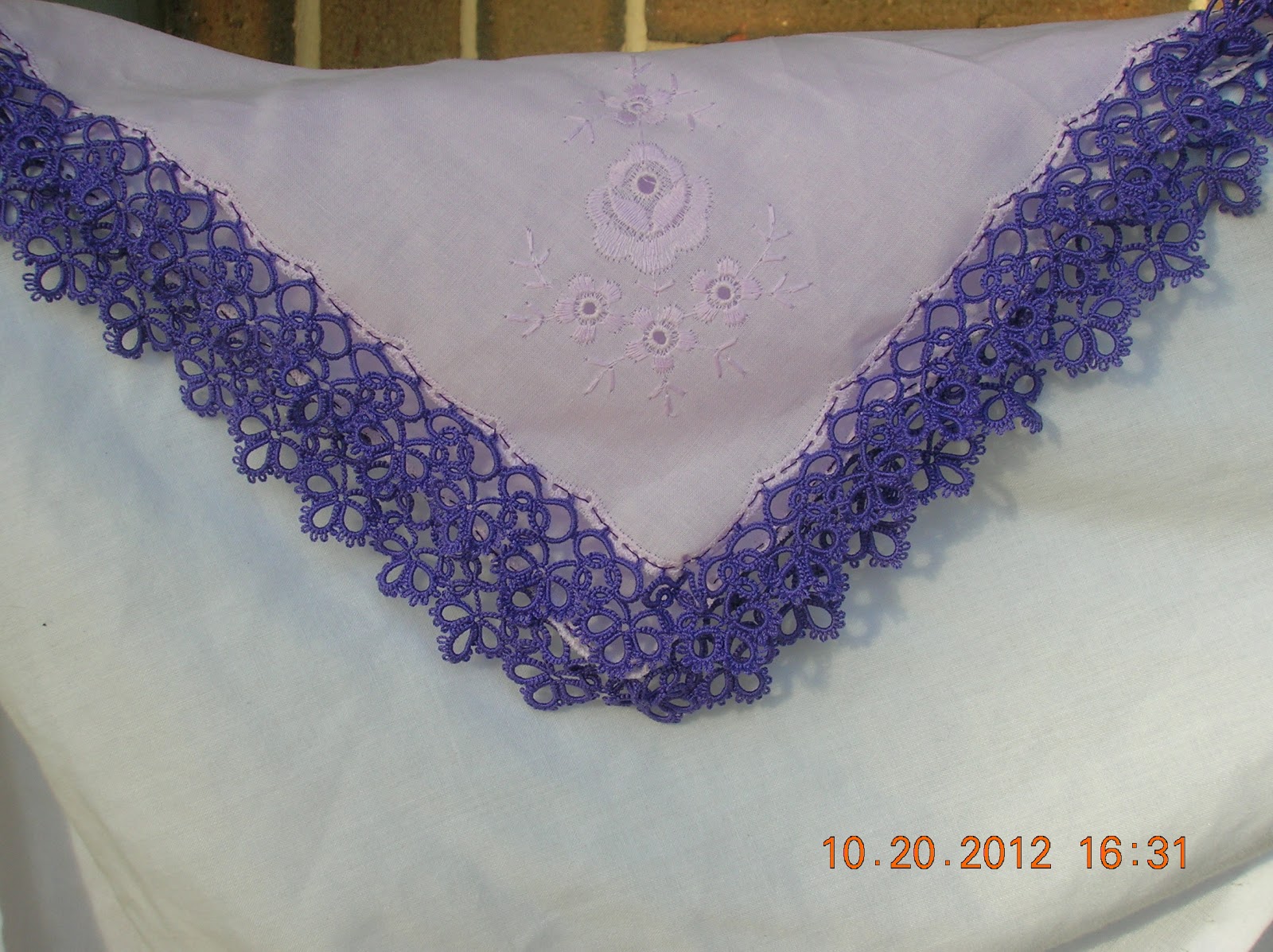 A good friend's mother died a couple weeks ago. It was both sudden, and not. She hasn't been in truly good health in some time, but still, I didn't think she was that sick. She took a turn for a worse, went into the hospital and passed quietly. This was right about the time I had a horrid cold and didn't dare visit. I haven't been able to be there for my friend like I would have liked to.

I have to give high props to zinc tablets. My coworkers, as a welcome-back-from-vacation present gave me a nasty cold. The sinus drainage started late Tuesday and I was miserable by Wednesday. I went to work anyway, because I had a training to go to. I started the zinc that night, canceled my plans for Wednesday and Thursday, called in sick on Thursday and kept my plans not to go to work on Friday. I canceled my plans to see my mom and sat around for three days, taking zinc and resting. By Saturday night, I was mostly recovered. I kept my Sunday plans and was back to work on Monday. I tried to catch another cold and fended it off with more zinc.

I managed to work another day in the community garden. Turning compost is a real workout, fyi. I have pictures! I took some and the director asked me to take more. She has a really nice camera. I took pictures of it, too.

We went to Savanna Georgia for a week. Here's a tip; if you go eat lunch at The Wilkes House, do not make supper plans. You might be able to manage a light snack later in the evening, but that's all. We visited Fort Jackson, the Railroad Museum, a few of the squares, River Walk, City Market, took a trolley tour and a ghost tour. May I say, Sorrel-Weed house? One of the creepiest places I've ever been.