Thursday was Deadlands again. We had another combat and my character, Alis got in some good shots, and got poisoned. It was fun to use her magic gun to shoot the bad woman's bow out of her hands (hey, she used it to shoot Alis with a snake arrow).

I'm still working on my Blue Rose character. I am reading the world background to fine tune her. I think I will end up changing a couple things, make them into goals instead of accomplishments. I do have most of her family plotted out and her immediate family have names. 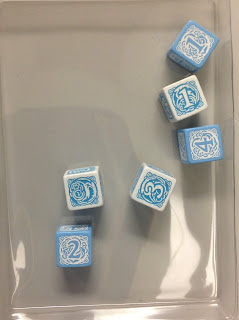 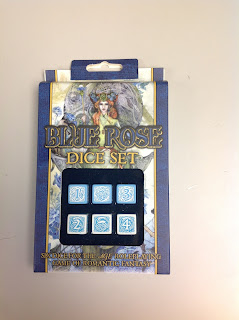 Saturday was Tri-Tatters. Leigh (of somethingunderthebed.com fame) had the second newsletter, with my article about the Bath Tatting Book. I hope someone who reads it finds it helpful. We had 12 people at the meeting, including two people who are learning to tat. One of them brought some of her grandmother's lace. She had some lovely hairpin lace, crochet lace, and a bit of tatting.

I finally figured out TotusMel's pattern she's letting me use. The problem isn't with her pattern; it's that it works really well with needle tatting and take some adjustment to make it work with a shuttle.

However, I cannot find my pink squares for Belgium. Argh! I know what container they're in but I can't find the container.

Sunday it was chilly and rainy so I didn't work on my car. I hope I'll get something done on it, soon.

CD and I watched a movie with Herman's Hermits. He likes the band. The movie was kind of 'meh' but it had some good music. However, quite nicely, it did not have a villain. It was very nice.

Today was part 1 of of a training, Mental Health First Aid. It was mostly what to look for and some of the risk factors for depression and/or anxiety. Tomorrow is part 2, practice and practical.

There were snow flurries this morning. And my neighbor's Bradford pear is blooming. And I think I saw a cherry tree blooming, too (it was pink blossoms and a tree). 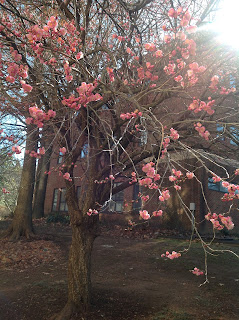 I went back to work on Friday, and that was a bit of an adventure. The road slush froze overnight on Thursday, so work didn't open until noon. I didn't want to drive to the park & ride (see: slushy roads) and my usual bus doesn't run in the middle of the day. But I checked the trip scheduler online and found a bus to take from home to the park and ride. I made it, just in time and got to work 45 minutes early. I wasn't supposed to report yet, and I was hungry. I ate lunch and then went to work. 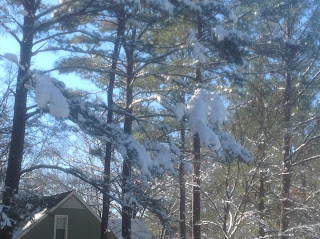 I stayed home on Saturday (and did some ridiculous prep for my upcoming Blue Rose character). Sunday, I drove to see Mom. Some of the residents have flu or flu-like symptoms, so it was visit at your own risk. I
took her shopping and finally got her stuff to wash her dishes (dish drain, dish cloth, etc). It was t-shirt and light jacket or (in my case) shawl weather. I wore my house of swank "Winter can kiss my butt' shirt and got a couple compliments on it.

These are the acorn squash I made for various holiday dining events. They were tasty. Acorn squash, brown sugar, maple syrup, butter, and a touch of salt. 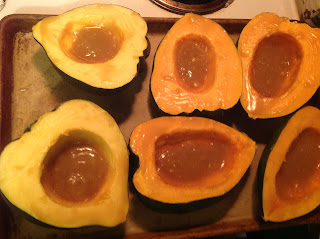 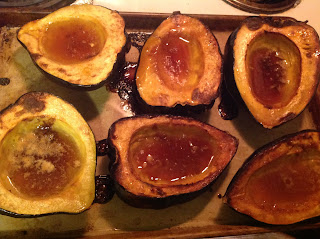 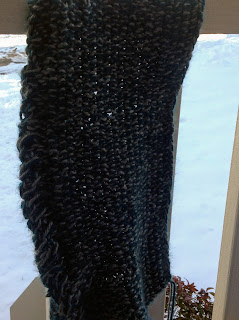 CD's scarf is up to 21". I managed to break my loom, so while Mom and I were out shopping, we went by JoAnne's and I bought a replacement. I also bought some glue, which was my first choice. I managed to glue the loom back together, I hope it stays fixed.

I want to work on a temperature scarf. I could do it for this year, I'm only behind 23 days (plus however long until I find/buy the yarn).

Tonight, I went with my co-worker, MB, to water aerobics. She's been going for over a year now. This was only the second time I've gone. It's a really good work out. Last time I wore a skirted swimsuit but the skirt kept floating up and getting in my way. I bought a new one and it's really cute. It zips up the front so I know it won't slip off. However, the base of the zipper isn't well padded and the end of the coil kept scratching me.

Here are some pictures and videos of the snow. 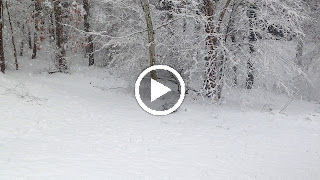 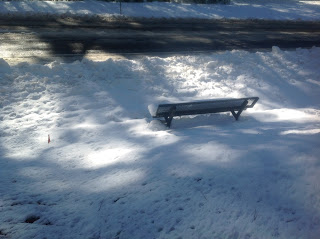 This time we lost power for about four hours. However, I was dressed warmly, have blankets, and the house's insulation is decent. The snow is also insulating, which helped. I barely got chilly, but when the sun set, I napped. I woke up about 5 minutes before the power came back on.

At least I'm not an American alligator.

I have more than 18" of CD's scarf done. I only have 30" to go. My cables are blargh, but they are my first cables, so it's not a surprise they are loose. Autumn Breeze showed me how to tighten them, but I don't do that until the scarf is done.

I'm working on my class for Palmetto Tat Days. TotusMel was fabulous and let me have one of her patterns. However, she needle tats and I shuttle tat. I am translating it and this is one that needle tatting makes easier (oooh, shocking).

And here's a neat graphic about US immigration over time.

Our Deadlands game is drawing to a close. I'll have to say goodbye to Alis Reeves. She's been entertaining to play. (and I love this picture of her. If you're interested in commissioning the artist, I have her contact info). 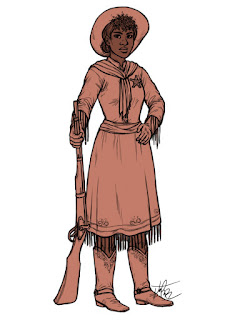 DR, the GM, has said he wants to run Blue Rose next. He had been trying to decide between Blue Rose and another game but when I posted 'for my next fantasy game PC, I want to play a woman with adult children, who now that her kids are out of the house is going to fulfill her dream of being an adventurer.' Nahla is about 40 years old, a widow with three children. The youngest is 17, and is a journey craftsperson. Her oldest is married with a child of his own. I also did Nahla's extended family, more plot hooks for DR. Hmm, now that I have an idea what Nahla looks like, I need to ask the artist if she has time for another commission.

I'm still working on my State Fair entry idea. I keep getting distracted by other projects.

Mom is still doing okay. I've convinced her to get out and walk about the halls to get some exercise. The last couple times we went shopping, she was worn out halfway through the 1st store. However, she's really sick right now. She got hit by some stomach bug, which is just miserable.

SR loaned me 3 seasons of The Librarians. I've been watching it and enjoying it immensely.

There was a screw up at the blood drive at UNC (they scheduled appointments right up to the point of 'needles out, not taking anyone else' -which since no one get seen immediately is a definite mistake) and I got turned away by the Red Cross. I went ahead and scheduled a platelets donation during the UNC closed day (no holiday pay). It took 4 hours. And by the way, when your lips and fingers tingle, you NEED the tums. Or unpleasant things happen. I had 4 minutes to go. Ugh. Next time, I need to up my calcium intake a couple days beforehand. At least they can use what I donated. But I can't donate again until late February. Which is annoying but not too bad. Except there's a shortage of blood and the Red Cross has called me 3 times this month.

I got sick the week of Thanksgiving. I went into work on Monday long enough to check there was nothing needing my attention. I canceled lunch plans with my Dad and had supper with CD's parents. And fell asleep after eating. I was still recovering. I was still a little sick the Monday after, but I felt well enough to go to work without worrying about a relapse.


I wanted to practice split chains so I did this tiny basket by Sue Hanson. I messed up but the final result is a cute variation. And yes, it's very tiny. 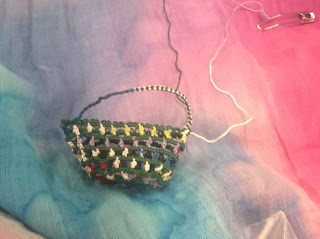 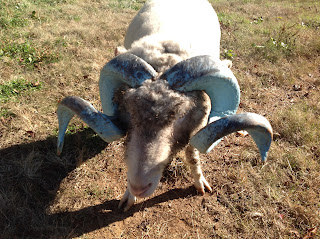 At work, we went to visit Ramses. We talked to the family who hosts him, and his little herd of goat companions, and his girlfriend and lambs. 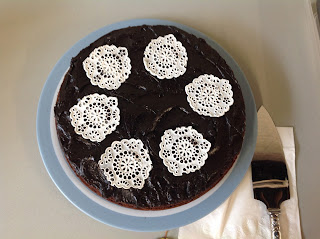 Tri Tatters had our 10th anniversary. That's the cake one of the members made. I made lace cookies. They were incredibly sweet, but good. And fast to make.

I'm still having trouble connecting my iPad to my laptop to download pictures. 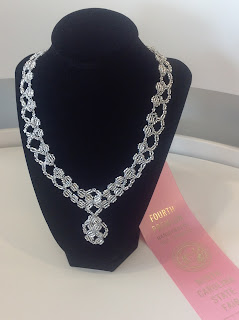 My 4th place ribbon for my beanile necklace. 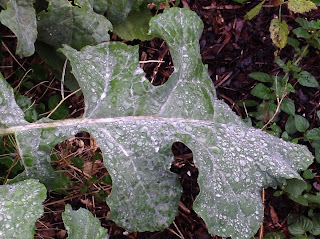 I just like how raindrops look on this leaf.

And as time goes on, it gets harder to post. I need to do a 'what's happened while I haven't been posting' post to summarize everything and then just get on with it. Maybe I'll manage that this weekend.
Posted by Sewicked at 6:24 PM No comments: