Sorry, I lost track of time and missed posting last week. And this week is late. It's been mostly rainy and gloomy, and often cold these past few weeks. We had a couple days of clear skies and sun, before returning to damp and gloom. I just want a chance to dry out.

Anyway, a young man I know asked me about mom's bed. I had made a couple posts on social media looking for a new home for it. We were supposed to take care of it last weekend, but as I was unloading my car (from the groceries I hadn't taken inside because it was raining), and the rain was starting again, I tripped and fell. I hurt my knee, got mud all over my jeans, and had to clean up the stuff that fell in the damp and dirt. I'd already dealt with a migraine, I decided enough was enough, I turned around and spent the rest of the day on the couch.

That turned out to be a good thing, because CD was able to go with me on Sunday, so he helped carry the bed frame. It was a bit much for one person. LE (the young man getting the bed) strapped the lot to his car and took off, slowly and carefully, for home. The rain had stopped so that was one less concern. He got the bed back home intact.

It's a nice bed. It's full size, but has 8 full-sized drawers in the frame. And the drawers have cedar pressboard liners. It's just too tall for mom to be safe using it.

Now that there's room, I'll need to get her a reclining chair and a glass-front cabinet to replace the bed. She has a daybed, so she has a place to sleep. But the reclining chair will give her a place to watch tv and to go to sleep if she gets sick. The glass front cabinet is to replace the drawers. A bookcase might do as well, but I think the glass fronts look better.

The forsythia, tulip poplars, and buttercups are blooming so spring is on the way. It just doesn't feel like it.

I've started my 2019 temperature scarf. I spent time planning the colors, then I learned I couldn't find half my thread. As a result, I'm using the thread I could find. I'm using beads for the extraordinary weather days. Each day is a flower, each week is a row. I'll add extra flowers in a single thread to make up the rest of the month and provide dividers. I may use metallic thread to tat the month dividers; a row of split rings perhaps.

I missed last week because I was on my monthly date with CC. We ended early because we were both tired, but still didn't get an entry done after.

Google+ is dying and they're ending elements of it already. Service flickers in and out. I'm trying another couple social platforms to see which ones fit.

The scarf I started using Bamboo Bloom just isn't working. I'm going to frog it and start over. OTOH, I've all but the closure finished on CD's scarf. I steam blocked it to get the final width I needed, then sewed up the back to make it a hood/scarf. It needs a toggle closure. I picked up the toggle and I made a kumihimo braid for the loop.

When I saw CC, I gave her some of my excess cotton yarn, plus some red heart I got from mom.

We didn't get that wintry weather. In fact, we had a week of spring-like weather. Then the weekend turned cold and damp. It's unpleasant, but at least it's not icy. Meanwhile, folks in Australia, neighboring New Zealand, et al are suffering through punishing summer heat. It's the opposite of what the Pacific NW US just got (snow, lots of it), but the same reason: climate change.

I made a point of buying some girl scout cookies, especially since I heard their views of trans girls. Yes, the story is 3 years old, but every time I see it, I remind myself to buy cookies.

I tested my tatted temperature scarf. At first I thought  three flowers per day in size 20, but that looked too small, so I tried size 10. But then I did the math and that's too big. I'm going with a row of 7 flowers per week, in size 20. Each flower's rings will be the low temp of the day and the chains will be the high temp. I think I'll mark the extraordinary weather (more than a 1/2" of rain or snow/ice) with a row of split rings.
It's still going to be long, ~5', and kind of wide, ~9", but in lace it will be much lighter than my 18 foot 2018 scarf.

I did make a scarf from some of the yarn I got from Mom. I gave it to RW's daughter, Frank (that's her nickname). RW gave me a hair pin/shawl pin from their trip to Costa Rica. Our game on Sunday got cancelled, so we played Lord of the Rings Online. They showed up photos from their trip during our visit. 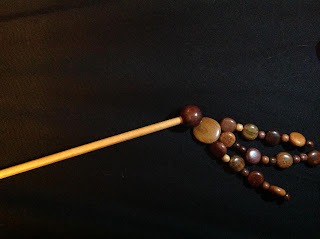 Chancellor Folt is gone. She resigned because she knew there'd be blowback from her decision to remove the Confederate monument pedestal. It was definitely the right thing to do; from a safety perspective if nothing else (and there's lots else). Then the Board of Governors were petty and classless and fired her, instead of letting her work 'til the end of the semester.

I started the scarf DB asked for. He's living in California now, so he wants it lighter weight than my usual. He wants a long scarf with bands of color, a la Tom Baker's Dr. Who scarf; but not quite that long and definitely not that dense. 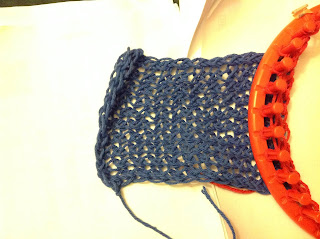 Mom was about 16 in this photo, and in her sister's wedding. She says this dress was ice blue and she wore it for ages after. 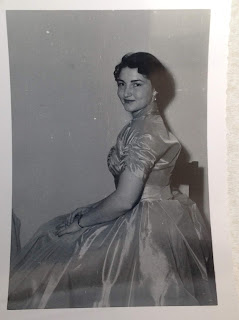 I've signed up to donate platelets this week. Hopefully, it will go as smoothly as the last one.

Oh, I found someone who wants mom's bed. I just need to make arrangements to meet him so we can take it apart, etc.
Posted by Sewicked at 10:17 PM No comments: